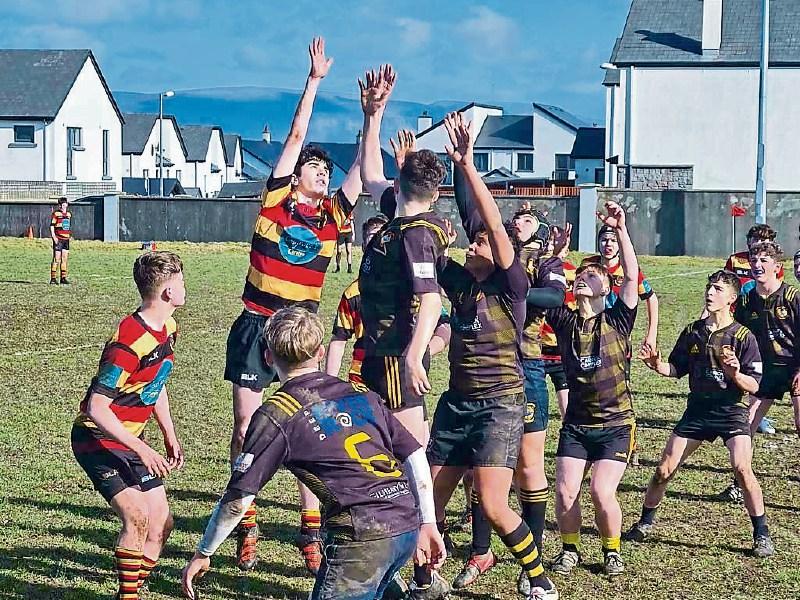 Carrick started the tie with huge intensity and dominated the early exchanges by putting huge pressure on the home side. Carrick’s defensive efforts were lead by captain Niall Stenson who yet again put in a huge display for his side.

On 15 minutes after a series of big carries by Bobby Hanrahan and Jayden Bosomtwe, Stenson broke through the Sligo rearguard to evade two tackles to score under the posts to the delight of the travelling support. Peter Moran added the extras to leave the visitors ahead by seven points.

Carrick continued to take the fight to their more illustrious opposition with all 15 Carrick men giving it their all for the Carrick cause.

On 23 minutes after sustained pressure from Carrick on the Sligo 22 metre line, tight head prop Jayden Bosomtwe, returning from injury in this game, picked a ball up from the base of a Carrick ruck to power over from ten metres with a number of Sligo defenders being brushed aside by the influential Ballinameen man, Moran converted.

Carrick were now moving the point of attack with great aplomb with outhalf Ben O’Connor using Tristan Hoey to great effect in midfield. As the half was coming to a conclusion Sligo scored with the last play to leave the score 14 to 5 at the interval.

Sligo made significant changes at the interval and began to dominate the early exchanges. The Carrick boys defended incredibly well with big performances from Eoghan Rynn, Tom Moolick and Callum O’Rourke leading the defensive charge.

On 50 minutes Sligo’s scrum half Andrew Ryan realised Carrick had failed to protect their blindside and broke from the 22 metre line to score in the corner to give the Sligo men the lead for the first time by the smallest of margins.

Sligo converted a penalty on 55 minutes to extend their lead to four points leaving the Carrick men needing a try as the game entered the final stage.

Carrick were not done yet and pinned Sligo back inside their own 22 metre line. As Sligo attempted to clear their lines the versatile Bobby Hanrahan playing at wing forward blocked down the attempted clearance and gathered the loose ball and sprint over from ten yards to score in the corner to the delight of the visitors and their supporters.

Unfortunately joy was to turn to heartbreak with Sligo scoring with the final play of the game in the eighth minute of injury time to leave the final score 25 to 19.