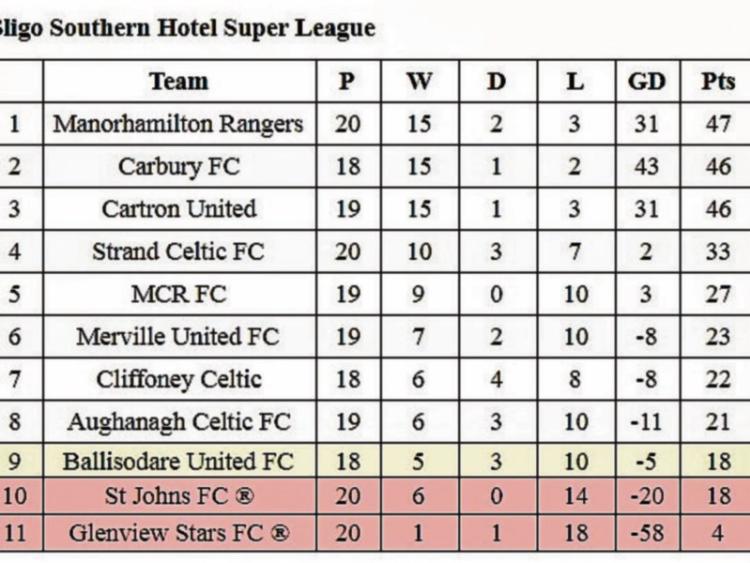 They say a week is a long time in politics but in the Sligo Southern Hotel Super League, it is positively forever as Manor Rangers must now wait and see after they regained top spot in the league after a dramatic series of games.

The first over Strand Celtic last Wednesday in Bee Park saw Manor triumph 4-2. Seamus Ryder opened the scoring with a header, were hauled back in before senior team debutant Oran Gethins headed home from close range before halftime, Gethins added a third after the break.

Strand pulled back one from the penalty spot but Manor held out for the win and three valuable league points.

But the big news came when Merville Utd cruised to a 3-0 victory over a Carbury team missing Ryan McManus and Mark McGoldrick who were both handed four match suspensions after their Glasshouse Hotel Cup Semi-Final defeat. It was only Carbury's second League defeat in almost three years.

That cut the gap to two points and with Carbury in action in the Connacht Cup on Sunday against West United in Galway, a quarter-final tie they would 2-1, Manor seized their chance to take back top spot in the league table when they defeated Merville Utd in a nine goal thriller, 4-5.

This was end to end stuff with both sides in attacking mode and Bradley Fowley levelled for Merville to leave the sides level at the break.

The second half was minutes old when Ryan Hargadon blasted Merville into the lead but two minutes later, Brian McDonald hit back again for Manor Rangers.

A draw looked on the cards until a dramatic final ten minutes that featured three goals, starting when Jordan Harte edged Merville in front.

Manor Rangers really displayed the grit of champions despite this body blow and Brian McDonald found the net for a second time, this time a 40-yard screamer five minutes from time to tie the scores.

And to complete an amazing recovery, Aaron Hickey slotted home a penalty to secure a 5-4 victory and finish Manor’s season on a high.

That left Manor Rangers on top of the table with 47 points, a point ahead of both Carbury and Cartron are level on 46 points each.

Cartron, who have one game in hand to Carbury’s two, are hitting form at just the right time having seen off Cliffoney Celtic 4-1 and Aughanagh Celtic 5-0 in the last week.

Cartron take on Ballisodare Utd tonight (Wednesday August 12), in their final league game with the Glasshouse Hotel Cup Final against Manor Rangers to come on Saturday August 22, while Carbury have two games left away to Cliffoney and away to Ballisodare.

It means Manor Rangers really are hoping for a miracle series of results that would see both Carbury and Cartron lose all their games. Draws would not be enough as both the town teams have superior goal difference so even a point would be enough for them to take the title in a dramatic finale.