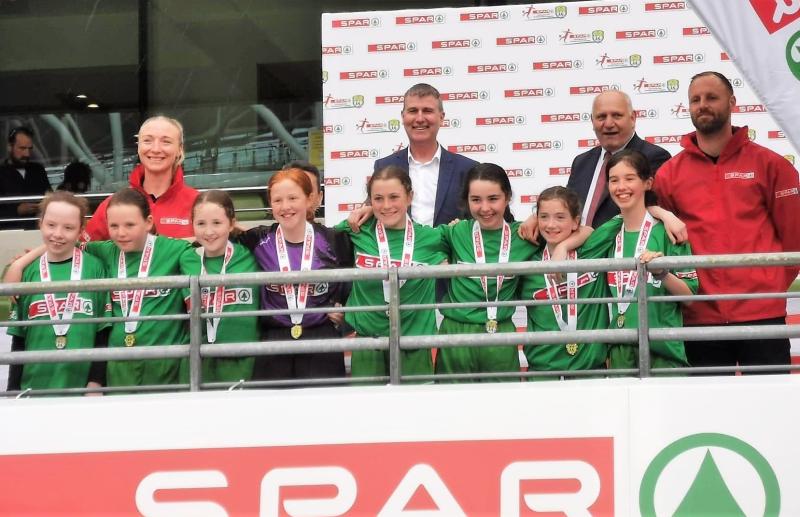 Eight young footballers from St Clare’s NS in Manorhamilton had the experience of a lifetime as they were among 28 schools who took part in the SPAR FAI Primary School 5s National Finals in the Aviva Stadium on Tuesday.

In the Girls B Schools Cup, which was a non-competitive event with no scores kept, St Clare’s faced teams from Sacred Heart Aughrim in Wicklow, Convent PS in Kanturk, Co Cork and St Colmcilles of Craigtown in Donegal and are the first Leitrim team to reach the event.

The SPAR FAI Primary School 5s is a fun five-a-side programme that caters for boys and girls in 4th, 5th and 6th class. Since SPAR took over the sponsorship in 2015, participation has increased by a spectacular 196% and has grown into the largest programme of its kind in Ireland. 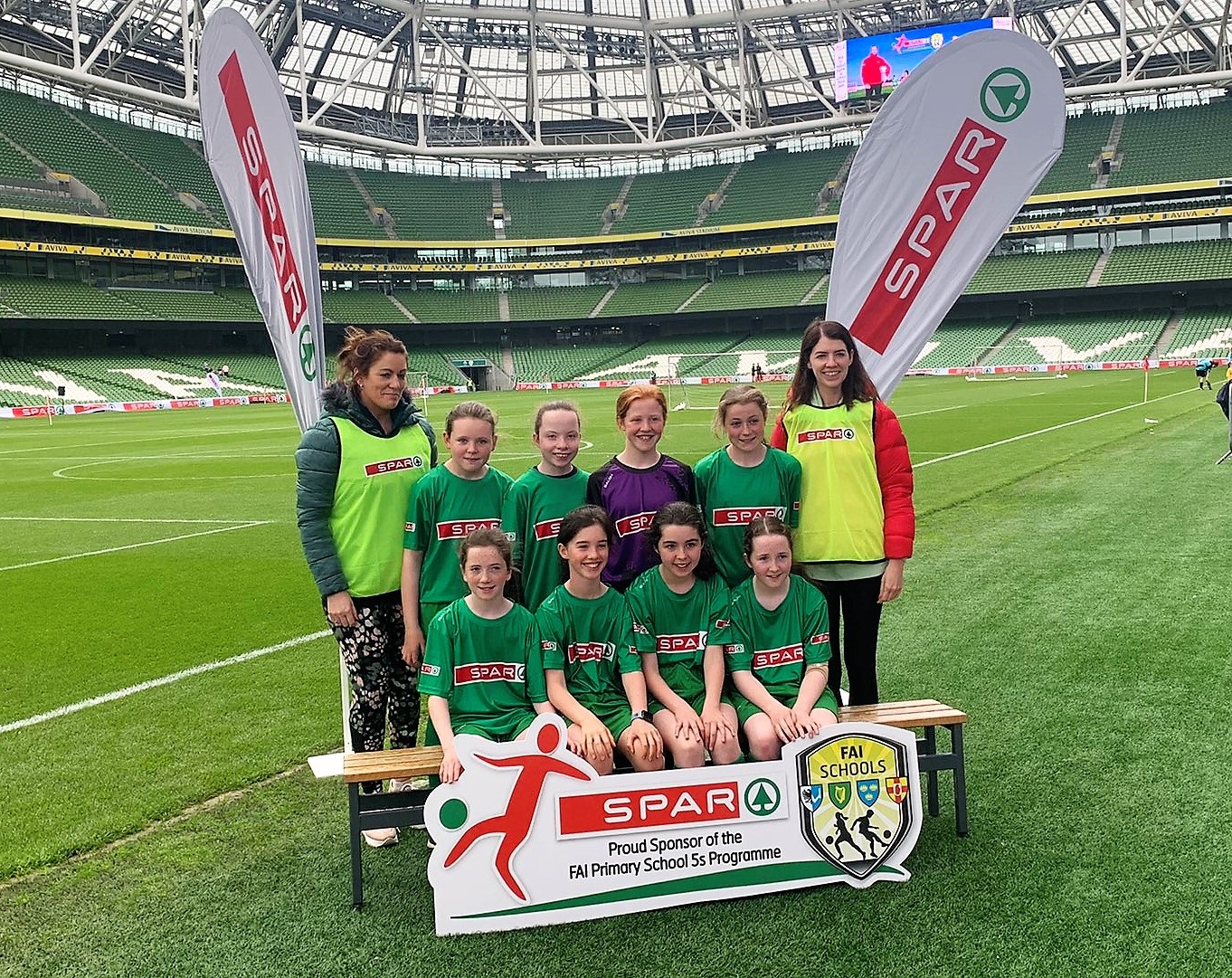 This year saw  a record 1,081 schools take part with 56,212 students involved. It was also the first year that Special Schools (Football For All element) participated, with 16 schools participating in the programme nationwide with four selected to take part in the finals in the Aviva Stadium. The Programme is now the largest grassroots football programme of its kind in Ireland.

SPAR Ambassador, David Meyler, said: “It’s great to see kids back and competing in numbers in this fun and inclusive programme. It’s an amazing feeling to get to play in a stadium like the Aviva Stadium and I’m sure that these kids will have made memories that will last them a lifetime.

International footballer and SPAR ambassador, Louise Quinn, commented: “It’s so important for young girls and boys to have programmes like the SPAR Primary School 5s where they can learn the skills of teamwork, leadership and resilience while having fun in a safe and welcoming environment.”

Colin Donnelly, SPAR Sales Director said: “SPAR is very proud to continue to support grassroots football through the fabulously inclusive SPAR FAI Primary School 5s Programme. Over the seven years of our sponsorship, the Programme has grown year-on-year and is now the largest grassroots football programme of its kind in Ireland.

FAI President Gerry McAnaney attended the Aviva Stadium finals and said: “Getting more football played in Primary Schools across Ireland, and helping Primary school teachers become more comfortable in coaching the game in a fun and accessible way, is one of the key elements of our 2022-2025 FAI Strategy and we see the SPAR FAI Primary School 5s as the perfect platform to do this. Obviously having the chance to play at the Aviva Stadium only adds to the sense of excitement for the kids as we all saw.

“It is very encouraging to see over 55,000 children take part in the SPAR FAI Primary School 5s Programme this year and the 45% participation of girls stands out, as the promotion of football for women and girls is fundamental to the growth of the game in this country.

“SPAR have been brilliant partners in developing this Primary School 5s Programme over the last seven years as have all of the inspirational teachers who have helped to make this happen and we have really enjoyed working with everyone to make the Finals Day a huge success.”

Tuesday’s event saw three divisions for small, medium and large schools with each Province competing in the various sections. There was a Girls Only category and a Boys and/or Mixed Section. For the first time ever in the history of the programme, a Special Schools division was welcomed, making the partnership more inclusion to Football for All participants.

An open draw was conducted to select this year’s participating schools as no qualifying rounds were completed due to the constraints of the COVID-19 pandemic earlier in the year. Donegal had an impressive six schools involved, four schools from Cork and Galway, two schools from Dublin, Tipperary and Meath and one school from Wexford, Monaghan, Westmeath, Clare, Sligo, Laois, Leitrim and Wicklow made up the short-list for the 2022 National Finals Day.

This season’s action in the Stadium was non-competitive so no scores were kept with the focus on fun and participation. The supporters were also entertained with Sambo drummers, face painters and a DJ.

Although the rain came midway through proceedings, it didn’t dampen the spirits of the participants as they enjoyed their footballing experience in the Aviva.