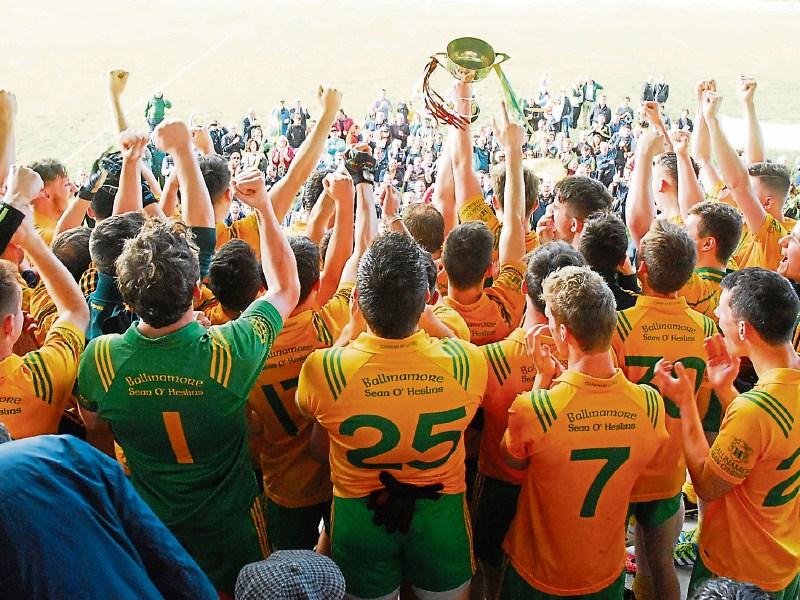 For the first time this year, Ballinamore Sean O’Heslin’s go into a Championship match as underdogs and manager Paul Prior is relishing the challenge.

Leitrim’s newly crowned Intermediate Champions take on a formidable St. Molaise Gaels from Sligo next Sunday at 2 pm in the Connacht Club Semi-Final in Pairc Sean Mac Diarmada and Paul is relishing the challenge ahead.

Speaking to the Observer, Paul said “It was great to win the Intermediate Championship but to still be playing competitive football in November, you must be doing something right and everybody is looking forward to it.

“I’d say it is the first game since we started championship football this year where we will be underdogs going in so it is great for fellas and a great way to be going into matches.”

Certainly, the Ballinamore manager won’t be taking St. Molaise Gaels as reports suggest this is quality team - “We know that they are not long relegated from Senior Championship and they are apparently a very good side and we will be taking nothing for granted..

“They have some very strong players, a couple of good forwards in Alan McLoughlin, Ger Brady, good centre-back, a Quinn lad. They are a good strong team and I think they only lost the Senior League Final by a point to the Senior Champions Tourlestrane.”

Reporting no major injury concerns, Paul says that his young team are firmly back on track after the celebrations following the win over Drumkeerin - “The mood is still good, we generally have a young side and they are all looking forward to it. We’re still in pretty good shape and overall, we’re pretty happy going into it.

“The lads celebrated for a few days but we’ve have a good few sessions since then, a few challenge matches and we had a League game last weekend so we are well back into it at this stage. I think they all know the story at this stage and we are definitely enjoying it.”

The only glitch in preparations has been the fact that so many young players are away in college, making training a little more difficult - “It has been a bit more difficult but the only good thing is the fellas are playing college football and ticking over, still training and they are still match fit.”

But no matter their underdog status, Paul and his Sean O’Heslin’s players are determined to make the most of this opportunity - “To get them in Carrick as well, we are definitely looking forward to it, it is a great opportunity for us.

“None of us would have ever played in a Provincial Club Championship Semi-Final like this so it is a great opportunity and there is no pressure on us at all, it is nice way to be going in. You have to be confident going in, otherwise you have no point turning up.

“It is good to be going into our first championship match this year as underdogs, we will be looking to see how fellas react and looking for them to really express themselves because in the final against Drumkeerin, there was a lot of pressure on us.

“The lads are still very young and it was difficult enough to cope with in the Leitrim Final but hopefully next Sunday we will be definitely going in with a bit of freedom to play.”

They may have had only one official outing since lifting the Intermediate crown, a comprehensive win over Leitrim Gaels last weekend, but O'Heslin's have seen players involved in the Minor B & Junior A Finals.

Indeed, they have an awkward fixtures clash this weekend as they are due to play on Friday in the Connacht Minor B Club Championship which may see Niall McGovern, an integral part of their full-forward line, in action.

St. Molaise Gaels are regarded as a top team in Sligo and contested this year's Division One Final and were only relegated after Sligo reduced the number of teams in their Senior championship.

Leitrim has a very good record against Sligo teams in this competition but St. Molaise Gaels are favourites for a reason. Ballinamore Sean O'Heslin's have nothing to lose next Sunday and if they perform with abandon, they can cause a major upset.

Please note that the throw-in time is at 2pm and not 2.30 as stated in previous editions.