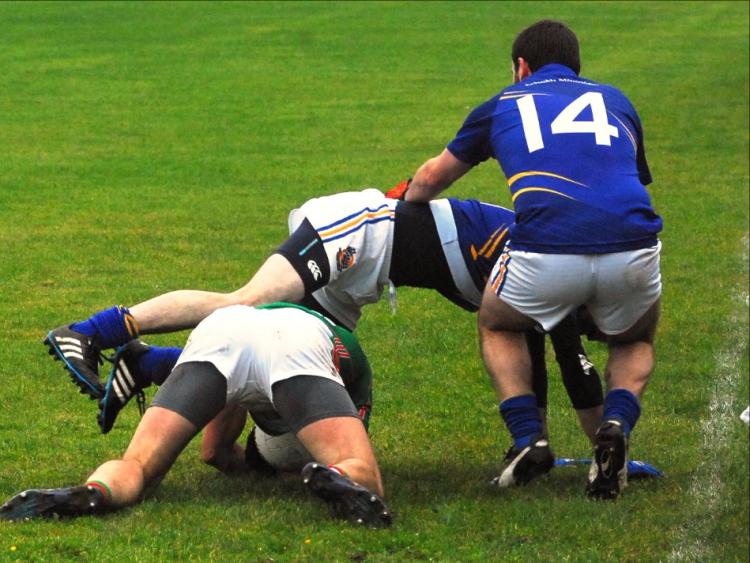 Morgan Quinn battles for the ball with a team-mate and a St. Brigid's player. Photo by Willie Donnellan

St. Brigid’s dismantling of Aughawillan on Sunday should hurt every single Leitrim Gael. It should be considered a personal and collective affront that once more our county champions have been demolished by far superior opposition at provincial level.

A variety of clubs in recent years have taken on this provincial mantle  with the same eventual outcome, notwithstanding the Willies victory over the Sligo champions in 2014.

And we should all examine what we can do individually, in our respective clubs, and collectively as a county to make sure this recurring trend is arrested and fast. We need to start realising results are not determined by our opposition, but by ourselves.

Aughawillan’s second county title in three years was a really brilliant achievement in Leitrim sporting terms. Melvin Gaels may have made history this season by winning the club’s and north Leitrim’s first ever ‘A’ grade minor title, but for me Aughawillan’s achievement surpassed even that.

As an aside, I thought that Matt Gaffney’s interview in the Observer following St Manchan’s county defeat this year was just exemplary. It should be added to the foundation level coaching certificate syllabus as compulsory reading for all team managers. It reinforced the respect that I have for a man who always shows the upmost respect and grace in both victory and defeat.

The majority of the county felt that Glencar/ Manorhamilton’s strength in depth combined with their desire to win their first title since 2011 would prove too much for the Willies this time out. Not to be.

Aughawillan did what the Willies do best – ignore the odds and win the big game. It’s part of their culture. Instead of bemoaning the plight of their little parish and the lack of numbers they work on developing every potential player from a young age and instill in them a collective belief that they are as good if not better than any other team in this county. If other clubs in Leitrim raise their standard Aughawillan will not be found wanting in responding. We owe them that much. We owe ourselves that much.

The majority of club teams in Leitrim genuinely believe that they are also as good as anyone else ‘on their day’. Unfortunately this is one of the worst attitudes you can possibly have in sport. It’s lazy and constantly allows the excuse ‘it wasn’t our day’ to explain why victories don’t come. It masks a failure to put in the requisite work that will eventually ensure that actions and results match belief and ambition.

When Manor decided that they would dominate Leitrim football in the late 2000s, it didn’t just happen overnight. They worked ferociously at maintaining a level of excellence that other clubs in the county were unable or more likely unwilling to match on a consistent basis.

Manor weren’t just upping the ante when the championship clash was in sight. They were embedding a high performance culture from the first training session of the new season.

Finally, Melvin Gaels got so pissed off watching their nearest and dearest neighbours returning year after year with the Fenagh cup that we finally acknowledged that the only way to stop this cycle was to beat them. The intensity brought to training by the squad throughout 2012 was the best I had seen since 1998. It’s no coincidence that was the last year we won the senior title.

Last year’s arrival of Pauric Davis in the Mohill club caused a sufficiently seismic shift in attitude to bring home a League and championship double. What a phenomenal return on investment that proved to be.

Effort and attitude always brings positive results. Maybe not as quickly as Mohill experienced, but they were coming from a solid base of talent. Talent on its own, however, is limited and will only take you so far.

Talent has never been lacking in Ballinamore. In recent years, there has been a question mark over the application of some the most talented players in the club. This year, though, they have shown great perseverance and effort to come back and claim the intermediate title after repeated  heartbreaks. Now the county’s provincial hopes hang in their hands.

Like Melvin Gaels last year, they have one good win under their belts in the Connacht Intermediate club championship. Both victories came against the Sligo champions: for Ballinamore the opposition was a fancied St. Molaise Gaels side.

On Sunday, they face a Westport team and revolves around the axis of the recently crowned footballer of the year, Lee Keegan. What I wouldn’t give to get the opportunity to pit myself against a player with that mantel on his head.

The pain of their recent county final defeats should stand Ballinamore Sean O’Heslin’s well on Sunday. They know reputations count for nothing in a two-horse race. They have nothing to lose and everything to gain. A victory would help rise all club boats in Leitrim.

Regardless of the result though, make sure that you do your part to rise the tide of Leitrim football this coming season. Just remember, the toughest opponent you will meet is yourself.