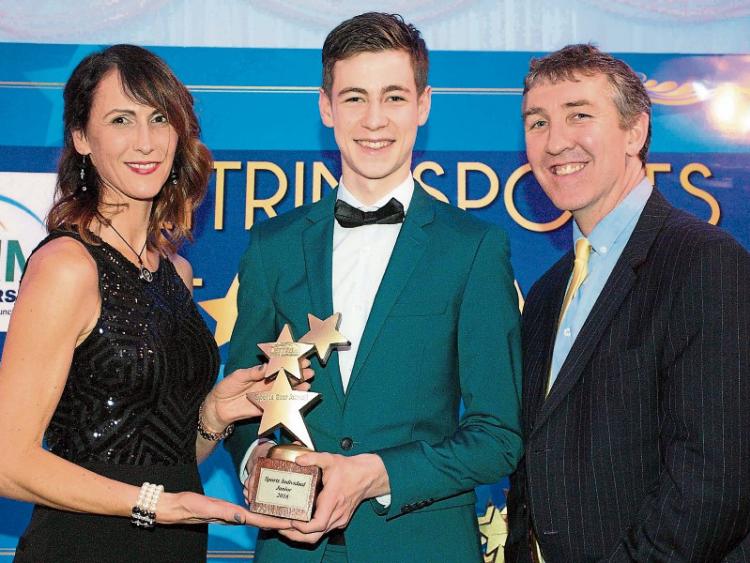 If there was a prize for the most stunned award winner at the 2016 Leitrim Sport Star Awards, Drumkeerin’s 17-year-old pool star Lee McSharry would win that award too!

What was very noticeable when you spoke to the Award winners in The Landmark Hotel was their surprise and gratitude at being honoured and their out-and-out admiration of everyone who had been nominated.

In that respect, Junior Sports Star of the Year Lee McSharry had a smile on his face that conveyed disbelief and sheer delight and his first words when chatting to the Observer captured those emotions as he said “I’m very thankful for the Award, I did not expect it one bit.”

The Drumkeerin stick-master warmed to the theme as he added “People say they don’t expect awards but honestly, I had no clue I was going to get this award, there were very prestigious nominees in the category so I am delighted.”

It has been a meteoric rise to the top of the Irish pool world for Lee who claimed two Irish titles at U17 and U19 level and it is almost impossible to believe that the Drumkeerin youngster was driven to become as good as he now is thanks to a few early beatings in the Pool Hall in Drumshanbo.

“To be honest with you, when I was starting out, my mate was telling me about this pool thing and I said I’d jump on it or whatever and I went to the pool hall in Drumshanbo, which is a great facility, and to be honest with you, I was probably one of the worst ones there but I had the best interest in it, I’d say.

“You have to have the determination for it and I wanted to become good and when I say the best players, I said I’m going to get good at this, that’s basically what I said to myself. I’m trying to continue that every year and it is going well I have to say.”

But Lee is certainly not forgetting his early struggles and he pays tribute to the Leitrim Pool Association for all their help - “I only started three years ago and the fellas have been so helpful and so friendly and everything and they wanted to bring me on so much, they are the best spokespeople you can have for a sport. If you had them in any other sport, I think it would sky rocket.”

Some may wonder about whether pool is a “sport” by the classical definition but there are few top class sportspeople who are putting in the hours that a youngster set for his Leaving Certificate has put in so far!

“I put in a lot of hours, that the honesty about it,” admitted Lee, “I wouldn’t put in just as much as I used to because of the Leaving Cert but when I was starting off, I’d be playing maybe three hours a night.

“That was every day to be honest with you and weekends is even more because you had the time off school.”

And while it might not involved punishing physical training, pool is incredibly taxing on the mental side, something Lee admits he struggled with at first - “I’d say 80% of pool is in your head, it is a very “mental” game and you see a lot of the best players are very focussed on what they do.

“When I was starting off, I always had problems with my focus and just getting over the line. Often times, I’d be 4-2 up in a game and I’d lose 5-4 but again it comes down to practice. The more practice you do and the more good players you play, the more you seal out them games and you’re focussed to the very end.”

The immediate? “Try to win an International title, try win a team title firstly in the Europeans and then a singles title. Next year is my Leaving, a lot of things to happen.”

For the future, Lee wonders about the possibility of the sport turning profession - “Pool is a growing sport and apparently the plan in the next two years is to make it professional. At the moment, it is like gaelic football, it is an amateur sport and not a lot of people play it.