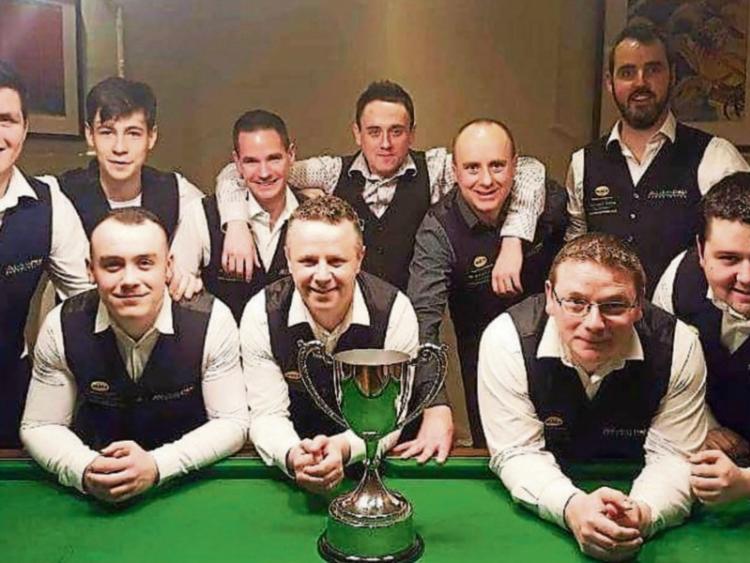 Following the heartbreak of the Inter County Cup last year where Leitrim lost out to eventual winners Mayo in the semi final to a deciding frame, this year the Leitrim team were determined to go further.

On March 26, the 10 players on the Leitrim Men’s County A team travelled to the Newbury Hotel in Mullingar to face Tyrone in the semi finals.

Both semis were set to start across the four tables and the teams were ready to see who would reach 14 frames first and make it to the All Ireland Cup final. Tyrone were quickly into their stride clearing from the break in two of the first four frames to take a 4-0 lead but the Leitrim team didn't panic

With current number 1 ranked junior player Lee McSharry getting Leitrim on the board, Brendan Shivnan, Wayne Kilmartin & Maurice Cullen quickly followed him up leaving Leitrim only 5-4 down after the first set.

With the second set changing to a difficult scotch doubles format it was Hugh Kielty and Lee McSharry that leveled the match at 5-5. But Tyrone fought back and won three in a row before Hugh and Lee again stopped their momentum with a crucial win to bring it to 8-6. W

With the pendulum swinging back and forth Leitrim gained the upper hand and won the last 4 frames of the set with two wins for Peter Devaney and John McKenna, one for Gavin Donnelly and Wayne Kilmartin and one for the current European U23 Champion Jamie Gaffney and four time Irish Champion Kevin McWeeney.

With Leitrim leading 10-8, Gavin Donnelly got Leitrim underway clearing from the break but with Tyrone again fighting back to take the next the lads needed to hold their nerve to get over the line. They did and Lee McSharry with an excellent clearance who sent Leitrim into the final to face Wexford.

With only a half hour break the Leitrim lads were ready believing they can go on and win. Leitrim again were slow to start losing the first three frames and with the Wexford lads wildly celebrating each frame win, the atmosphere was raucous.

But this closely knit Leitrim team know the quality and character they have and with Jamie Gaffney quietly getting us back into the match to take it to 3-1, it was Brendan Shivnan, Kilmartin and McKenna who kept the fight going to leave Leitrim trailing 5-4 after the first set.

The second set of scotch doubles was tit for tat and with another two wins for John and Peter and a win each for Gavin and Wayne, Hugh and Lee and Brendan and Maurice, the Leitrim team leveled the match at 9-9.

It was all down to the last set and with Wexford winning the first frame, it was up to Hugh Kielty to level the match with an excellent length of the table double on the black to give Leitrim a vital frame in one they looked set to lose.

Further wins for McWeeney and Gaffney left the score 12-11. Kilmartin took Leitrim to within one frame of victory before Brendan Shivnan held his nerve to send the Leitrim team into joyous celebrations.

After receiving the trophy, County Manager Brendan Shivnan thanked his team for their dedication and also to the people in the background both past and present who have contributed to the development of this team and pool in Leitrim.

A great win and hopefully a taste of what's to come when they head down to the Irish Championships in the Gleneagles Hotel Killarney on May 18. Visit www.leitrimpool.com for further details of pool in Leitrim.