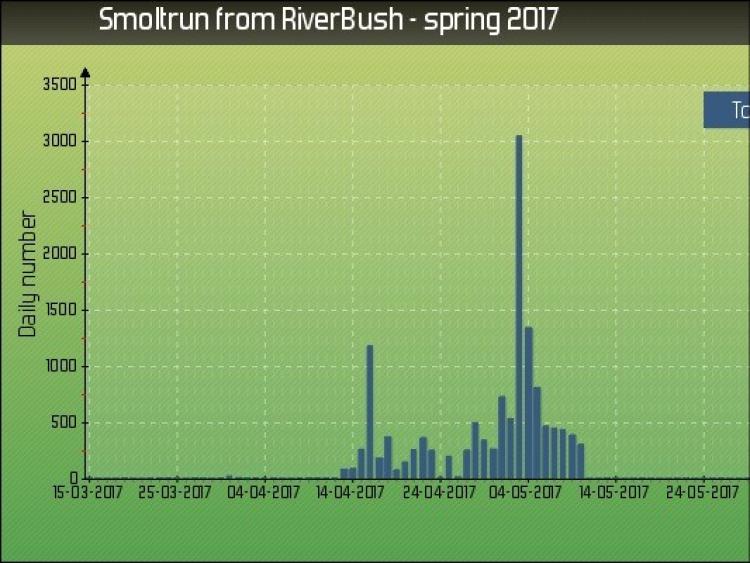 Inland Fisheries Ireland has launched the SMOLTRACK project in Ireland, an online tool that gives the public the opportunity to follow the numbers of juvenile salmon making their journey down the River Erriff - the National Salmonid Index Catchment (NSIC).

The project is running in five other locations in Europe and will help determine the survival of young salmon during their migration.

The lifecycle of the Atlantic Salmon has seven stages, spawning, ova, alevins, fry, parr, smolts and finally mature salmon. Smoltification is the process the juvenile salmon undergo in freshwater in order to prepare itself for life in the ocean.

Once salmon parr have grown to between 10 and 25cm in body length, they undergo a physiological pre-adaptation to life in seawater by smolting. This is evident by changes in their appearance as they become silvery and swim with the current instead of against it.

There are also internal changes in the salt-regulating mechanisms of the fish. This adaptation prepares the smolt for its journey to the ocean. In Spring, large numbers of smolts 1-3 years old, leave Irish rivers to migrate along the North Atlantic Drift, and into the rich feeding grounds of the Norwegian Sea and the greater expanse of the North Atlantic Ocean.

Traps are used to catch migrating salmon smolts for tagging before releasing them to continue their migration journey. In order to provide stakeholders with the opportunity to follow and compare the migration timing of smolts in several countries, the daily numbers of salmon smolts counted in each system is uploaded for online viewing.

In Ireland, tagging is being carried out on salmon smolts from the Black River, a tributary of the River Erriff (NSIC), which flows through County Mayo. The Erriff is one of the premier salmon fishing rivers in Ireland and its smolt run typically occurs over six weeks during April and May. This year, the smolt run commenced on the river on the 3rd of April with 289 salmon smolts counted on the system to date.

The salmon smolts are tagged with miniature acoustic transmitters and their subsequent migration is followed via acoustic listening stations situated at various locations.

This information will help scientists to understand the survival rates of salmon smolts during their migration through the lower parts of rivers, estuaries and coastal areas, in addition to providing data on smolt run timing and migration behaviour.

The project will provide new data, which will inform future salmon management and conservation work.

To view the online smolt tool for the River Erriff and for more information about Inland Fisheries Ireland, visit: http://www.fisheriesireland.ie/Fisheries-Research/smoltrack-project.html .

Until next time, stay safe on the water and always wear a lifejacket.