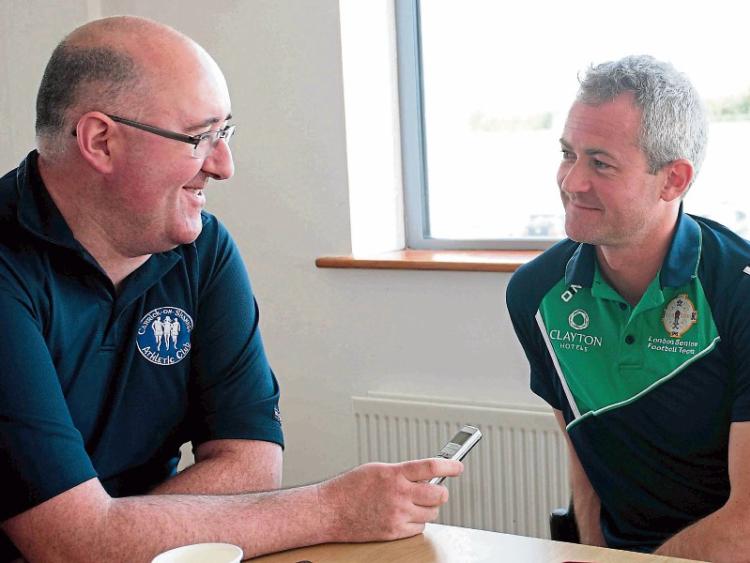 Managing an inter-county team can be a thankless task at the best of times but managing London has to be a labour of love, something that is very evident when you spend any time with Ciaran Deely.

The former Wexford player took over the reins of the Exiles last year and is gearing his team up for a shock next Sunday against Leitrim in Ruislip, the ambition of London almost screaming from the English capital.

But London face the sort of challenges that not even Leitrim have to deal with - “Players come and go, I wake up on a Monday morning and our best players tells us he is moving back to Ireland and there is nothing you can do.”

Deely was speaking to the Observer at the launch of the Connacht GAA Championship and the subject of Tyrone All-Ireland winner Eoin Mulligan and Dublin star Kevin O’Brien came up. But Ciaran is adamant that a new culture is bedding in across the water.

“We’re trying to set up an environment and a spirit within the group. Probably over the years, London have so many lads last minute. We didn’t do that last year and we haven’t done it this year, we wanted to try and develop an environment there, a proper inter-county set-up.

“From people outside the set-up, they mightn’t quite get that but if you are involved in the set-up, it is different. There are two aspects to that - first of all, my ethos and the other managements that we don’t just want to parachute a guy over from Ireland into the team. A fella has to come in and work for his spot and deserve his spot.

“I’m a great believer that you create an environment, a spirit, a team ethos that lads have been working together for since November 15, and that means a lot to them and they can see no matter who you are, whether you are Mark Gottsche or Eoin Mulligan or Kevin O’Brien, you have to work as hard as anybody else to get in the team and to put in a shift.

“The other thing as well is that London, under Noel Dunning and Paul Coggins, London has changed as a county and as a team and the biggest thing is that we are looking to compete, we’re not the whipping boys of Connacht.

“I think always London have a chance but sometimes things go wrong on the day, things just don’t work. We compete well in the League, we competed against Wexford, against Limerick so we’re looking to do the same again in Connacht.”

Expectations always rise in Ruislip when it is Leitrim travelling over to London and two of London’s three wins in the Connacht Championship have come against the Green & Gold. But Ciaran expertly douses any flames of hope with a dose of reality.

“It is a very different challenge than Mayo coming to town last year, in some ways it is a damage limitation exercise. Leitrim is different. A lot of people say to me that, God, that is one you can win or expect to win.

“My response is always that we don’t traditionally beat Leitrim, we never beat Leitrim in the League, they are definitely a higher ranked team than Leitrim. Generally Leitrim win three or four games every year in the League, we normally win one and maybe get a draw.

“But do we have a better chance of beating Leitrim than Mayo? Of course we do.

“When I speak to players at the beginning of the year and when a few lads are uncertain of coming back, they look at the draw and say ‘ok Leitrim or Roscommon or Sligo’ and there is a better chance of winning that and they want to go on a run, they want to get a few wins.

“Everybody wants to win championship games and we’ve moved away from that in the last few years for London where a lot of players just want the big day out in Ruislip. We’ve tried to incorporate an environment where that is not enough any more, that we are looking to get a few wins under our belt.”

And Ciaran predicts that London will know very early next Sunday if they have a chance to shocking Leitrim - “We know what we have to do and I think with London, you normally see after 20 minutes how London are going to do.

“ So if we are in the game after 20 minutes, there is a big chance we will be in the game at 60, 65 minutes and that has generally being the case with London.

“I think for London and this has always been the case, it really does have to be all about ourselves. Because London, our biggest problem over the years has been a lack of consistency and what we’ve tried to implement is a little bit of more steely resolve and even when things go against you, you don’t drop the head, you keep going all the way to the end.

“There is a lot of lads in London, top quality inter-county footballers but they don’t come to London to extend their inter-county career, they come for their careers and also for lifestyle.”

And Ciaran, who has consistently praised Leitrim’s respect for the Exiles, finished by saying “Leitrim will be absolutely fully aware of us, the challenge in Ruislip and because they play us a lot in the League, there will be no surprises on the day.”