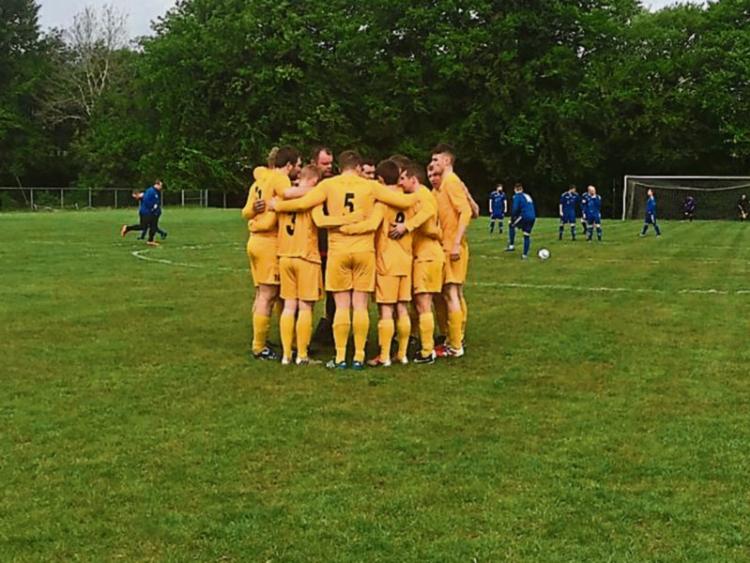 Manor Rangers recorded an impressive win over newly crowned Super League champions, Carbury on Sunday morning last in the Bee Park to advance to the final of the North West Hospice Cup.

Having shown their opponents the respect they deserved with a guard of honour to welcome them onto the pitch, Manor Rangers put pleasantries to one side when the game got underway.

Manor made their intentions known from the start and came close to opening the scoring inside the three minutes but Niall Walsh was denied by a good save.

The early Manor pressure was rewarded in the seventh minute when a Brian McDonald long throw caused panic in the Carbury defence. Aaron Hickey made his presence felt as he competed for the initial delivery and when the ball fell to Colm Callinan the midfielder opened the scoring with a delicate lob over the Carbury goalkeeper.

There was no sign of Manor resting on their laurels and they continued to push forward in search of a second goal. Colm Callinan went close for Manor once more but his fine strike was well saved by the Carbury goalkeeper.

The Manor pressure was rewarded shortly after the 20 minute mark and once again it was a long throw from Brian McDonald that undid Carbury. Aaron Hickey's presence made it difficult for Carbury to clear the danger and after a scramble inside the box the ball was eventually ricocheted off a Carbury defender before flying into the net.

Niall Walsh, who has been in excellent goalscoring form in recent weeks had an opportunity to further extend the home side's advantage but his shot after a powerful run was well saved by the Carbury netminder.

Manor began the second half where they had left off with Seamus Ryder going close to scoring a third for Manor but his header from Paddy Woulfe's corner was just off target.

Barely three minutes later Ryder went even closer to scoring a third for Manor. Good play involving the McDonald brothers Anthony and Brian resulted in a fine delivery but the Carbury goalkeeper was equal to Ryder's effort as he made a fine save to keep his side in contention.

Aaron Hickey was next to go close when he attacked Paddy Woulfe's corner but his header was just wide of the Carbury goal.

The third goal that Manor had craved arrived when a Niall Walsh free curled around the Carbury wall and deflected off a defender before deceiving the goalkeeper and nestling in the net to all but ensure Manor's passage to the final.

The win could have been even more comprehensive but Niall Walsh saw a penalty saved by the Carbury goalkeeper, who despite the final score had an excellent game for his side.

Carbury's Christopher Kelly scored a late consolation goal but there was to be no denying Manor Rangers who deservedly advance to the final of the North West Hospice Cup.

Manor will be back in action this evening, Wednesday, when they face an away game against Ballisodare in the semi-final of the Radisson Blu W B Yeats Cup.