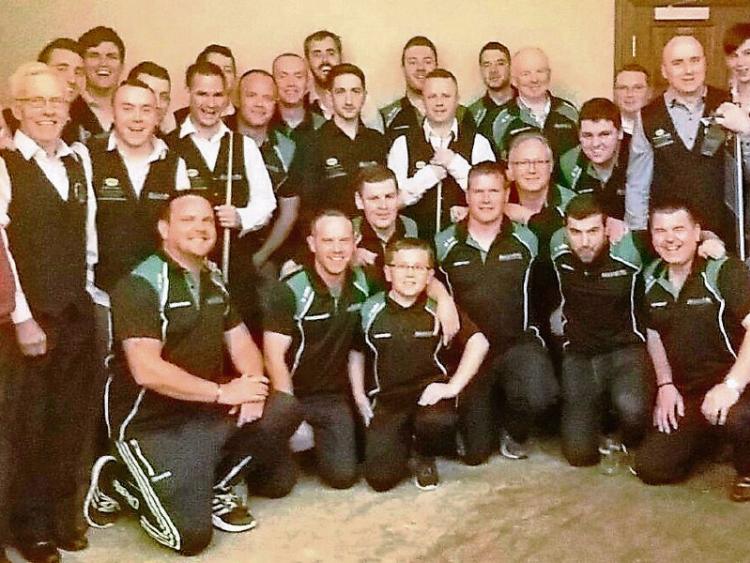 The Leitrim competitors who took part in the recent All-Ireland Inter-county Championships in Killarney.

Leitrim produced some strong performances at the All-Ireland Inter-County Championships in Killarney but the almost 30 strong Leitrim contingent just fell short in the U23 Finals.

The Leitrim A team were drawn into a very difficult group consisting of Cavan, Dublin and Cork.

Leitrim started off brilliantly beating Dublin 14-9, this match was not all one way the whole way through as the momentum swayed between the teams but Leitrim found another gear and won the match.

On Friday, they faced neighbours Cavan who were fastest out of the blocks and took a four frame lead which they held all the way to a 14-8 win.

With two spots available for three teams, Leitrim couldn’t have started any better against Cork and created a substantial lead, Cork never laid down but it wasn’t enough Leitrim saw out the match winning 14-6.

Cavan did Leitrim a favour, beating Dublin 14-1, to top the group with Leitrim qualifying for the Quarter Finals of the main event for the first time in the County Pool Associations existence.

In the quarter Finals Leitrim faced 2016 finalists Louth. Leitrim started the match brilliantly leading 7-4, but Louth never lay down and the momentum swayed their way, they took the advantage by coming from 7-4 down to leading 11-7.

Leitrim showed great character and began come back but for every frame or two Leitrim won, Louth won one and unfortunately Leitrim lost 14-12 in a very entertaining match. Louth went onto beat Tyrone and lost in the final to Antrim.

In the singles events Leitrim provided several huge upsets over the weekend, Hugh Kielty started it off by beating one of the favourites Gary Clarke 7-5, Kevin McWeeney beat multiple Irish Champion John Columb 7-5. Hugh did very well for the remainder of the event beating Richie Lawlor 8-7 coming from 7-4 down, Wayne Kilmartin reached the last 32 also unfortunately losing to Paul O’Donoghue but beat Damien Corrigan on the way to the last 32.

The B team were drawn into a tough group consisting of Tyrone B, Wexford B, Down B, Fermanagh A and Offaly A. Leitrim played Offaly A unfortunately lost 14-7 before losing 14-12 to Wexford B as Leitrim didn’t get much luck.

This changed on Friday as Leitrim defeated Down B 14-12 and Fermanagh 14-8. The group was wide open with no team guaranteed into the quarter finals yet due to some upsets in the group stages.

Leitrim finally faced Tyrone B to qualify for the Quarter finals. Unfortunately Leitrim couldn’t have started worse and had a big hill to climb but it was too much, Leitrim lost 14-5 they didn’t qualify for the main event but were entered into the Shield event.

In the last 16 of the Shield, Leitrim faced Kerry B, Leitrim started the game very well and took a lead 5-2, they kept this lead and gained on it to see out the match 14-7. In the Quarter Final they faced Kerry A but lost 14-6, Leitrim never got going in the match and struggled to stop Kerry once they took a big lead. Well done to all the lads on the team!

Well done to Dave Flynn and Richard Shanley who did well in the singles reaching the last 32 of the 256 big field!

Well done to Adam Casey who entered both the U12 and U15 All Ireland Championships. Adam has improved greatly over the past year, and has a brilliant interest in the game. This is great to see in this young man who is only 12 years of age! Adam was definitely the number 1 supporter for the Leitrim B team as Dad John Casey was the captain, Adam even helped with running the team!

The U23 team were in a group with Tyrone A, Wexford B and Wexford C. Leitrim had their toughest game first against Tyrone A. There was nothing between the teams no team gained more than a 2 frame advantage throughout the match. The match went to the wire 9-9 but Leitrim lost 10-9 with a poor rub of the ball in the decider.

Leitrim knew they had to push on from this if they wanted to qualify for the Semi-finals and they beat Wexford B 10-5 and Wexford C 10-7 after training 7-4 at one stage.

Leitrim showed their class beating Mayo 10-3 to set up a final with Tyrone B. With no more than two frames separating the teams, Tyrone had five clearances from break which would really put any team under pressure and Leitrim lost 10-8.

Well done to the lads on making the final, all the team are eligible for the U23 competition for the next two years so an All Ireland could be on the way yet.