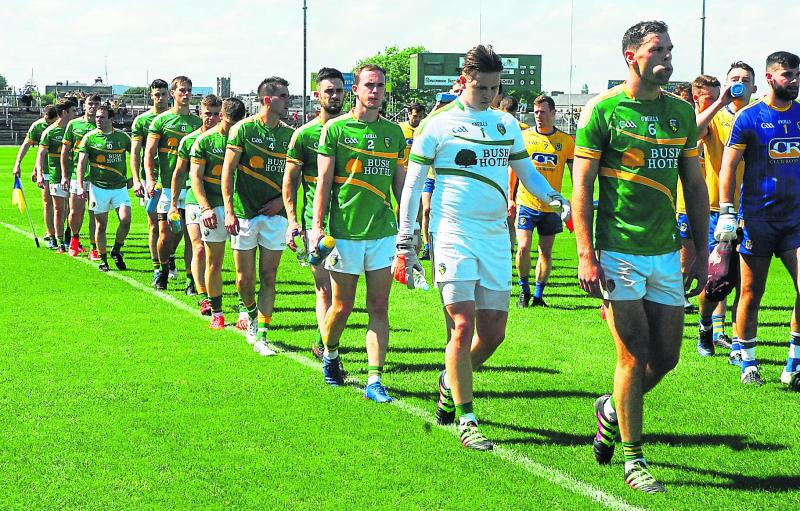 Captain Donal Wrynn leads his Leitrim team-mates during the parade in Hyde Park before the game against Roscommon. Photo by Willie Donnellan

It’s been a while since I spent so much time thinking about Leitrim football. The Roscommon result came as no surprise to me and it gives me no pleasure to write that.

I wrote in my column the week before the game that if they wanted to compete the players had to prepare themselves for the greatest mental and physical challenge of their young careers.

Some did. Others didn’t. The few let the majority down and that has been the greatest failing of our inter-county teams since 1996.

I’m a positive person. I thrive on looking on the bright side of things; of seeking the solution rather than focusing on the problem.

But right now I’m beginning to wonder whether 1994 was the worst thing that ever happened to Leitrim football.

How could our greatest achievement in modern memory possibly be a negative?

Because that group of players showed that if you are willing to make every sacrifice possible nothing is impossible. Because that squad showed that commitment to the long-term collective goal always trumps the fleeting desire of the individual ego.

That group of players proved that skill isn’t the only thing that wins you games: you also need heart and desire and an irrepressible will to win. Sometimes more than skill. That group of players showed that if you demand more of yourself than you think you can give, you will reach previously unscaled heights.

That group of people – and I include the management team and the county executive – highlighted that if it takes a village to raise a child then it takes a unit to win a title.

In short, that group set a standard of excellence; a standard necessary to elevate Leitrim from also rans to contenders and winners. And there has been a minority in every squad since that has been unwilling to strive towards excellence.

Because it is hard and lonely and frightening and it doesn’t guarantee you success. If you have left every stone unturned in the pursuit of excellence and you still come up short then you have nothing left to blame.

You’re exposed as who you are. There is no hiding. No excuses. But that’s ok. In fact, it’s one of the most liberating experiences in life.

Because quality can bring you immense satisfaction regardless of the result. The joy of the experience is in the execution rather than the outcome. It doesn’t immunise you against the unbearable pain or the crushing disappointment of defeat. I felt it and cursed it many times.

But you take off the mask and you present yourself to the world and you say: ‘I gave it everything, everything I have. I had nothing left to give’.

And because that experience touched you deep in your soul and tapped into what drives you as a human being you get back up again and go at it even harder the next year.

But a county panel is merely a reflection – a microcosm – of what is happening at club level. It is there that the base of one’s sporting values are built. And we live our values.

Are we destined to continue on this round-about of mediocracy or do we want to follow a path that leads somewhere more rewarding and productive? At present Leitrim clubs do not embrace true excellence. At best, they want to be better than the rest of the clubs in Leitrim. Is that truly ambitious enough?

That is why we have failed so miserably over the past couple of decades when we venture out into Connacht. Because at the start of each season we dare not contemplate that far. Even the notion of maintaining a level of excellence that long scares the bejasus out of us.

But if we only ever aspire to be better than those in the our county how can we expect to defeat those from other counties?

We usually celebrate a county title so hard that we have set ourselves back weeks before we even take to the field in Connacht.

Don’t get me wrong. It is important to celebrate and mark our victories. And our defeats. Together. But always appropriately and in alignment with the bigger picture.

I’m not saying there isn’t enough effort at club or county level. There is a wealth of effort. But effort on its own will only get you so far. The effort must be of the highest quality. All the time.

Every single catch, kick, pass, shot, hit, save, block, run, thought, and action demands excellence each time you practice it. And that must be brought to every training session, and into every game. You cannot operate in automatic. You must be engaged at all times.

But here’s the clincher. When away from the game you also need to be mindful of how your actions are supporting excellence in execution when on the training field or in a match situation. And that includes what you eat, and drink, and how much sleep you get.

But it also means allowing yourself other interests in life and the opportunity to blow off steam, and decompress from the pressure of the game, and remain refreshed. Again, all with the bigger picture in mind.

Because many of your family and friends won’t have such limits placed on their social lives. And they won’t need to plan everything – weddings, birthdays, festivals, holidays – around the GAA calendar.
And that’s a big ask. But this is the price for the honour of representing your club or your county.

No one forces you to step up to that plate and you are to be heralded for putting your head above the parapet. But don’t disrespect the responsibility that comes with the role. Remember, you’re there because you want to be. Enjoy it. Embrace it.

But when the going gets tough and the pressure comes on and the temptations to take short cuts present themselves or that big night out seems too good to miss, don’t let yourself and your teammates down.

Because while you may earn the number on the back of your shirt, the jersey belongs to something bigger than you.

All you are doing is keeping it in good stead for the next generation and you have an obligation to pass it on in a better shape than you received it through your efforts, your endeavour, your attitude, and example.

If you are not capable of living up to the demands of your team’s jersey then let someone else fill it.
Another Leitrim team takes to the field this Sunday as our ladies take on Sligo in the Connacht final in McHale Park. The two have had some epic matches in recent years with Sligo having the slight upper hand.

There won’t be much between them this time around either and I really hope Leitrim are rewarded for the great efforts they have gone to this season. A little success goes a long way and it helps to refill the well of energy and belief from which all our county teams drink.