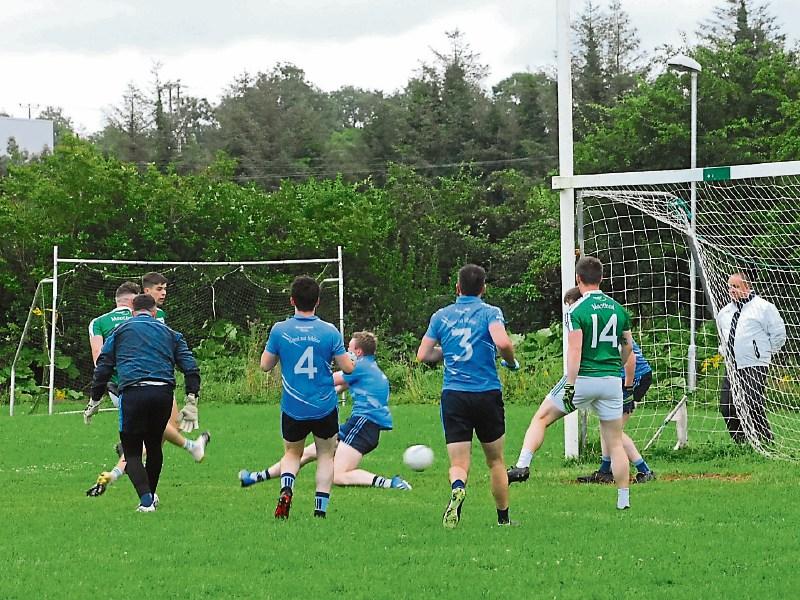 A partially hidden Keith Beirne fires the ball to the Allen Gaels net despite the efforts of defenders to stop him Picture: Willie Donnellan

There is nothing like the sight of your neighbours colours to get the blood pumping in a GAA fan so expect a lot of very excited fans in round 2 of the Connacht Gold Senior Championship!

Two derbies leap off the page - the always ferocious meeting of Melvin Gaels and Glencar/Manorhamilton in Kinlough and Friday's first ever Senior Championship clash between 2020 finalists St Mary's Kiltoghert and their fellow parishioners Leitrim Gaels. 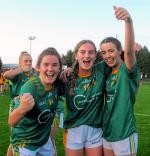 So plenty to savour I'd say! We take a brief look at the four games down for decision:

This clash might not be a derby but there is a long standing rivalry that makes this game as hard fought as any clash of neighbours. Allen Gaels have always risen their game for the Willies and I expect Friday's clash to be no different.

Whether that will be enough is hard to know as the Drumshanbo men suffered a heavy loss to Mohill last weekend, but a lot of teams have done that. They will want to get some of their key players back as soon as possible.

Aughawillan regard 2020 as a lost year as injuries derailed their championship bid. A fully healthy Aughawillan are a challenge to any of the teams in the competition but strength in depth might be an issue. On form, you have to go with Aughawillan here.

If there is a game Leitrim Gaels have been waiting for since their emergence at Senior level, it is this one! They take on St Mary's in what could be a hotly contested encounter. Now, the big task for both teams will actually be keeping emotions in check because staying calm and collected is what will win this game. The Gaels probably have the older and more physically powerful outfit and they will attack this game with fanatical zeal but they will need to be composed in front of the posts.

St Mary's have a big advantage of already having an outing, albeit in atrocious conditions but the way they came through against Glencar Manor after a slow start speaks of a team who have built on last year's progress. This is too tight to call but having a game already might see St Mary's home ... might!

Probably the game of the weekend and a repeat of the high scoring Division 1 Final. What lessons will Ballinamore have taken from that game? What can Mohill do to improve on that performance? Those are the questions facing the teams next Saturday in Ballinamore.

Stopping Mohill scoring is going to be the hardest thing about this game as they ran up 3-16 in the League Final and 6-14 against Allen Gaels last weekend so O'Heslins defence have to step up. They also have to be much more clinical as wides cost them so dearly against Fenagh but they won't lack for motivation against the champions.

There is an added factor that a defeat would leave Ballinamore without a win after two games but St Mary's were in the same position last year and reached the final. Ballinamore's hunger may be greater but hard to see past the all conquering Mohill at this stage.

Another game to whet the appetite and the fact that a Melvin Gaels victory would leave Glencar Manor without a win after two games would make a win in Melvin Park all the sweeter for the home team.

These teams met last year and the Gaels won a thrilling contest with Darragh Rooney doing huge damage for the Gaels. Expect Manor to try and curb his influence but the injury hit former champions are struggling right now with player availability and they would desperately love to have Aaron Hickey back in action.

A win here would almost certainly guarantee Melvin Gaels a place in the quarter finals and their win over Gortletteragh after a mammoth journey is sure to inspire the Kinlough outfit. However, there is sure to be a reaction from their neighbours and they certainly tested St Mary's to the limit last Saturday. Again a close one in store but I'll give the dreaded nod to Melvin Gaels here.