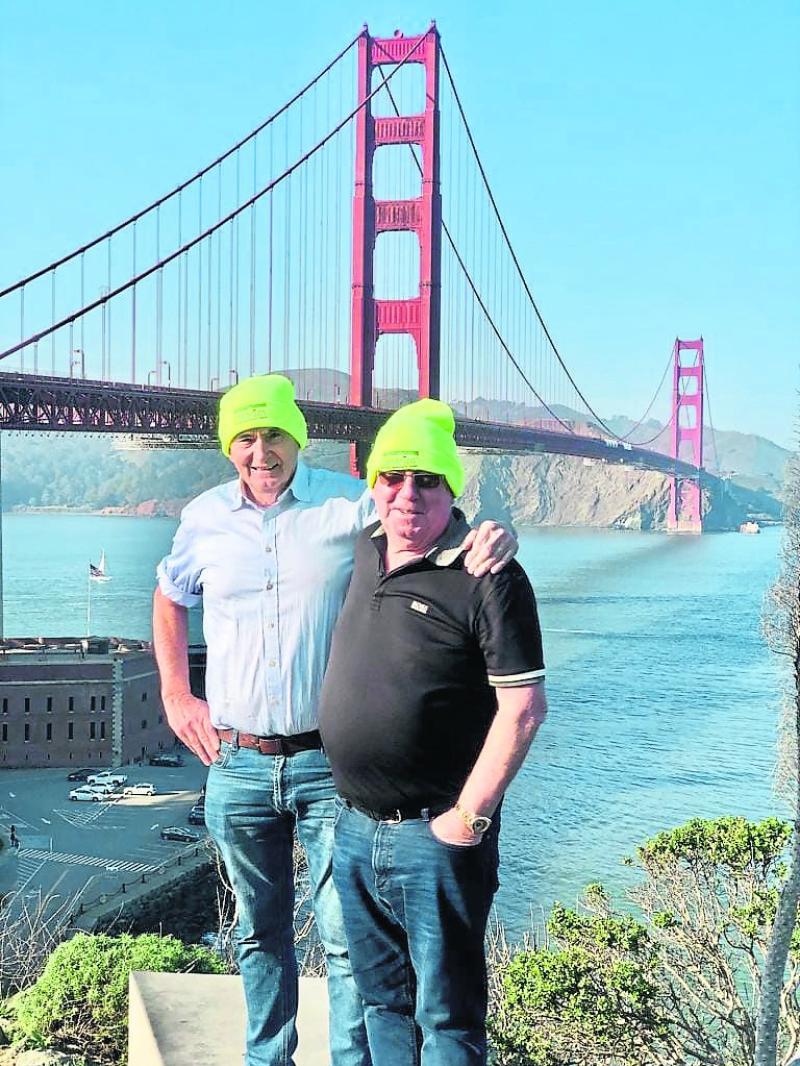 Dessie McWeeney and Leitrim Guardian Person of the Year Pat Gallagher, both from Aughnasheelin, pictured after walking across the Golden Gate Bridge, San Francisco

On Saturday morning many of the Big Apple’s Leitrim supporters will be heading to Tibbetts Park, Yonkers, for the finale of the 'Fifty Mile Challenge'.
Last year the Leitrim Supporters Club launched this initiative, for the month of January, with a two-fold goal, firstly, to enhance general fitness of the county’s residents, and secondly, to generate badly needed finances for the Leitrim team.
Well the project was a resounding success as local residents were regularly seen pounding Leitrim’s highways, byways and boreens from Annaduff to Kinlough, in all sorts of weather.
This year the 50 Mile Challenge was embraced more enthusiastically, prompting comedian Seamus O’Rourke, to claim that if there was a census, you couldn’t count Leitrim’s people, as they were nearly all out walking, jogging and running, notwithstanding that the county has the smallest population of any county.

Naturally Leitrim people on this side of the Big Pond quickly embraced the challenge and soon the ex Lovely Leitrim folks were hitting sidewalks, pavements and parks regularly around the Big Apple’s five boroughs, stockpiling the miles.
On the coldest day of the year over a hundred hardy souls showed up to complete the last few miles of the challenge. Of course the bond between native and emigrant is strong, and as James Orr, the Bard of Ballycarry, stated, “the savage loves his native shore”.
Sure there’s a sizeable influx of Leitrim exiles scattered throughout the tri-state area, but the biggest concentration is at the juncture of St. Barnabas parish in Woodlawn and McLean Avenue, aka, The Emerald Mile, in south Yonkers, prompting a journalist from the Irish Independent, to label the area “Little Leitrim” a comparison to “Little Italy”, a staunch Italian enclave around Arthur Avenue in the Bronx.

At one stage the St. Barnabas football team had twelve starters with Leitrim origins as well as the backroom team being from the home county as well.
Basically the article chronicled the strong attachment that these exiles have to the home land and the home county. That bond is currently accentuated by the fact that Seamus and Caitriona Clarke, proprietors of JP Clarke’s on McLean Avenue are the major sponsors of the Leitrim team. In many ways the popular bar and beer garden is a home away from home for many of New York’s Leitrim exiles.
So far this year over 200 folks have signed up to complete the fifty miles, and they will meet in Tibbetts Park for the grand finale of the challenge.

One of the hallmarks or highlights of an athletic career is being capped for your country. Well if Seamus Clarke had your phone number or knew of your whereabouts you were soon a capped Leitrim supporter. You couldn’t say no to this man, when it comes to Leitrim. You might get away, if you had a bad phone connection.
Soon the lovely yellow, Leitrim logoed caps were cropping up in Tibbetts Park, Van Cortlandt Park, Central Park, Forrest Park, Flushing Meadows, and even on the other side of the US as Leitrim exiles cranked out the miles under all sorts of weather.
The caps seemed to be nearly everywhere, even one mature couple was reported to be using them as nightcaps. Word was things were a bit chilly in the bedroom.

Anyway as the Manorhamilton mainstream meteorologists would say, it was fairly hardy weather, so the caps came in handy. These capped runners will be greeted by Enda Stenson and Martin McCartin, Chairman and Treasurer of the Leitrim County Board, and of course the former great Mayo footballer Andy Moran.
Andy, a former Footballer of the Year, a two time All-Star, plus a host of other accolades, is the current Leitrim manager.
Andy will be at the starting line to set the runners/walkers off and at the finish line to greet the finishers.
Maybe, perhaps in a gesture of sporting ecumenism, a few Mayo folks might show up to help Leitrim’s cause. After all Leitrim have been Mayo’s greatest supporters, especially when they get outside of Connacht. Meanwhile when the walking/running is finished all hands head up to JP Clarke’s for refueling and refreshments, and I’m sure any exertional pains or aches will be soon alleviated with a few copious potions of nature’s oldest anesthetic.

Andy Moran Book launch
Then the second part of the programme begins, namely launching of Andy Moran’s book, titled 'Lessons Learned in Pursuit of Glory'. This is a very compelling account of the two-time All-Star, Footballer of Year and former Mayo captain’s football journey.
Moran, one of the most respected and admired footballers of his generation, details how sport influenced every facet of his life, highlighting the teachers, coaches, managers, teammates among others who inspired or influenced along the way.
The title is certainly very appropriate, and the book should be required reading for any young athlete, but especially Gaelic Players. It certainly makes great reading for all GAA folks, but none more so than for the band of loyal Mayo supporters who have lived through decades of agonies, ecstasies and near misses.

Well Saturday afternoon will be an opportunity for these folks to meet their hero, shake his hand and get their autographed copy of this highly acclaimed book by one of Mayo’s greatest players.
Mike Morley, Chairman of the Mayo GFC in New York along with some players, officials and supporters will be there to make a presentation to Andy on his retirement from his long and stellar career as a Mayo county footballer.
JP Clarke’s has always been much more than a bar. Over the years it has hosted plenty of notable politicians, musicians, artists, authors and athletes among other celebrities. Well next Saturday, Clarke’s breaks new ground as it will have a runway featuring highly medaled models. Well, your typical model wouldn’t hold a candle to these stars, and I’m sure you know them well, as they have showcased their awesome talents on the biggest of stages, Croke Park.

They are Martin Furlong and Andy Moran who will be modeling Leitrim’s latest jersey.
Martin, the former Offaly goalkeeper, is a four time All-Star, a former Footballer of the Year, holder of four All-Irelands, three seniors and a minor, plus seven Leinster titles, will model the new goalkeeper’s jersey. Don’t be surprised if Martin executes a few shot-stopping dives as he comes off the runway.
Andy Moran, the recently appointed Leitrim manager, is also a former Footballer of the Year, holder of two All-Stars, two National Leagues, three Sigersons and eight Connacht titles, will model the outfield jerseys. Don’t be surprised if Andy decides to pop a few points over the bar as he comes off the runway.
The rest of Leitrim’s athletic attire will also be on display.

The Leitrim Ladies will not be left on the sidelines, as they are becoming a formidable force on the Big Apple’s playing fields. They will take to the runways too with players such as Sharon Redican and Lisa Sorohan among other Lovely Leitrim ladies modeling the McKeever sponsored jerseys and County Board sponsored sportswear.
There will also be a draw for All-Ireland hurling and football tickets as well as many spot prizes. Dawn Doherty and Frankie McCormick as well as DJ Don will also be providing entertainment. Dawn and Aisling Center’s Band from Yonkers were featured on last year’s Late Late Christmas show. I’m sure Seamus and Caitriona, proprietors of JP Clarke’s and sponsors of the Leitrim team will ensure that all are well looked after for the evening, and the craic should be mighty.
The Clarke duo hail from great Gaelic strongholds. Seamus is a native of Gortletteragh, and Caitriona is from Drumshanbo, whose brother Pauric Kenny was on the ’94 Connacht Championship team. The Leitrim dynamic duo were also the Leitrim Guardian Persons of the Year in 2021.

Also besides being a great advocate for Leitrim, Caitriona has done Trojan work in Irish American Community, and was chosen as Grand Marshall of the Yonkers St Patrick’s Day Parade in 2019.
The rigors of walking and running will have built up reserves of stamina to withstand a bit of hardy partying and the caps could come in handy outside, especially in the beer garden.