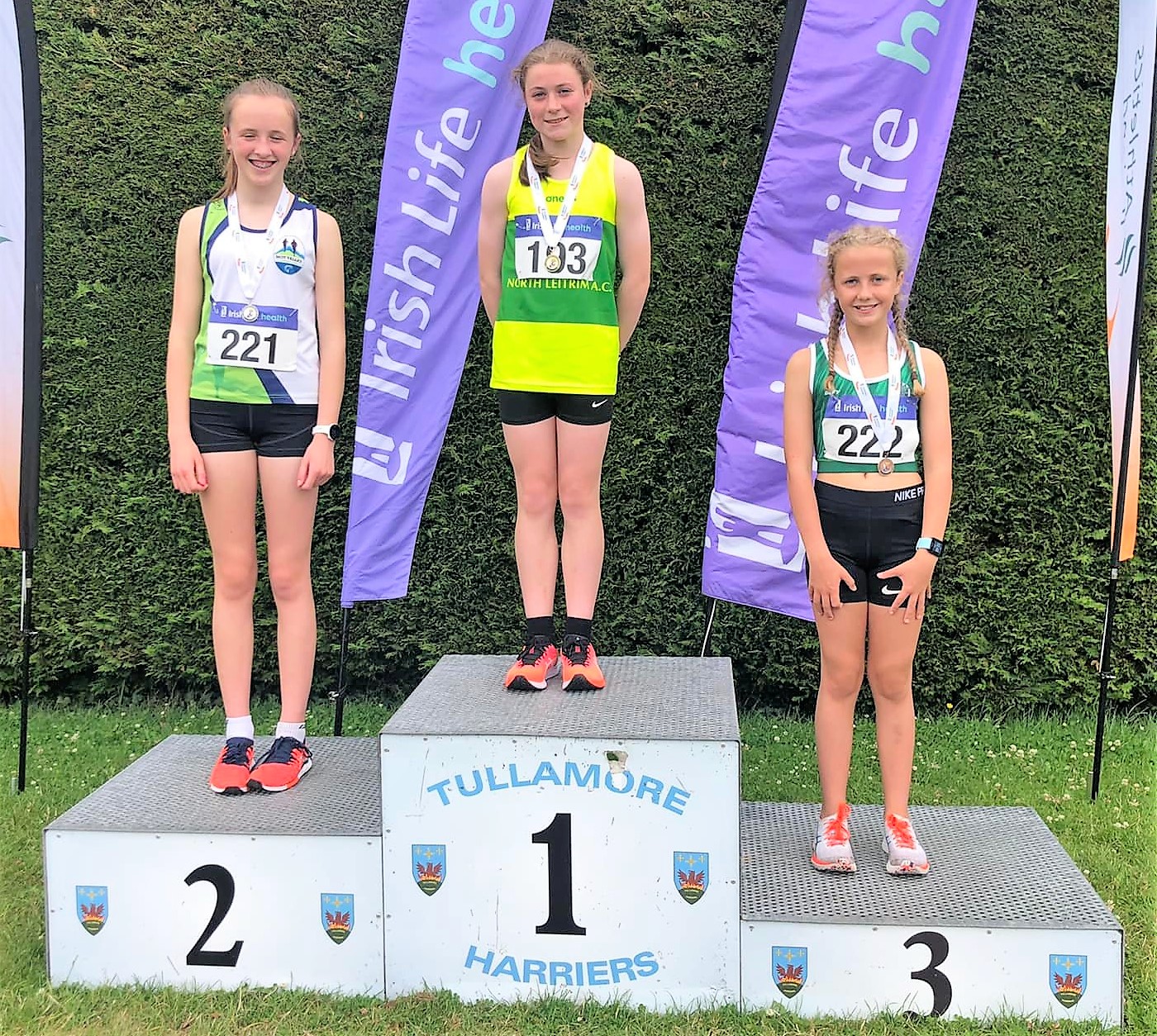 It was a double celebration for the Mulvaney Kelly family as Sarah’s sister Karen also took home gold in the U15 walk while the county’s strong race walking tradition was further strengthened when Luke Fitzmaurice claimed silver in the U16 walk.

And on the first weekend of the championships, Scott Williams (North Leitrim) claimed bronze in the U13 Shot. There was some heartbreak too with Dean Williams and Luke Fitzmaurice both finished fourth in the U16 discus and U17 hammer respectively.

For Sarah Mulvaney Kelly, it was a gold medal record setting day as she won by just over half a minute in the U14 walk. Her time of 10.03.41 also took more than six seconds off the previous championship best performance of 10.09.89 set by Alicia Boylan of Monaghan Phoenix back in 2009.

Second in the race last Saturday was Moy Valley’s Lillian O’Brien (10.34.44) with Taillte O’Callaghan of Tuam finishing third (10.39.70) for a Connacht clean sweep.

The Connacht theme was continued in the U15 girls walk as Karen Mulvaney Kelly claimed gold after a tough battle with two Tuam athletes. The North Leitrim AC walker finished strongest down the home straight to win in a time of 9.51.55 with India Cunniffe second in 9.54.73 and Savanagh O’Callaghan third in 9.56.30.

Sarah Mulvaney Kelly looked to be heading for another medal in the U14 discus as she led from the first round to the end of the fifth round, her best of 24.76m only being passed by Mary Kilrane of Edenderry (25.17m) and Emer Purtill of Dooneen AC (24.92m) to move Sarah back down to third.

However, the top three were then all moved down a place as Maya Rossa of Blackwater AC unleashed a winning throw of 27.77m and Aoife McGeehin of Olympian Youth threw 26.12m to take the top two places.

That gave Scott the bronze behind Claremorris’s Maxwell Marukasonti (11.55m) and Sean Riordan from Fanahan McSweeney AC (11.21m). On day one of the championships, Scott finished fourth in his hurdles heat in a time of 11.22 seconds to miss out on making the final.

Scott’s brother Dean missed out on a medal in the U17 discus when he threw 29.26m to finish just outside the medals behind Finisk Valley duo Corey Scanlan (44.45m) and Tom Feerick (34.92m) and Robert Powell of Gowran who three 34.66m.

Luke Fitzmaurice also finished fourth in the U16 Hammer as his best of 31.44m in the first round couldn’t catch the bronze medal of Bobbie Glesson of Templemore 35.77m.

Gerard & Eanna in the medals at National Championships

North Leitrim’s All-Ireland Schools winner Mark Hazlett qualified for the final of the U15 boys hurdles when he finished third in his heat in a time of 13.28 seconds, behind Craughwell’s Conor Penny. The Drumkeerin youngster improved in the final, clocking 13.05, to finish fifth with fellow Connacht athletes Conor Penny winning in 12.34 with Sligo’s Brian Cullinan, who finished behind Mark in the All-Ireland schools, second in 12.55.

Mark also finished ninth in U15 Discus with a best throw of 21.38m.

On the first weekend of the championships, Sara Mulvaney Kelly qualified for the 800m final after clocking 2.26.94 for fourth in her heat before finishing 11th in the final in a time of 2.33.05.

In the U13 Girls long jump, Carrick AC’s Anna Trench Winston just missed out on qualifying for the top eight by two centimetres when she jumped a new personal best of 4.25m but was pipped for the final three jumps.

Carrick AC's Gerard O'Donnell clocked the second fastest Irish 110m hurdles time of the year when he ran a time 14.27 seconds in Belgium on Saturday night while on Sunday, Ballinamore's  Olympic race walker Colin Griffin finished 10th in a time of 56.04 in the AAI National 10 Miles Championship in the Phoenix Park.

Ballinamore Family Festival  will again include the Ballinamore Open Roadraces under AAI Rules on Friday August 12, at 7 30 pm. The events will be Open 10K, Open 5K plus fun run, U14 and U12 1500m.

All races  will take place together with the start and finish of all three at the same location.