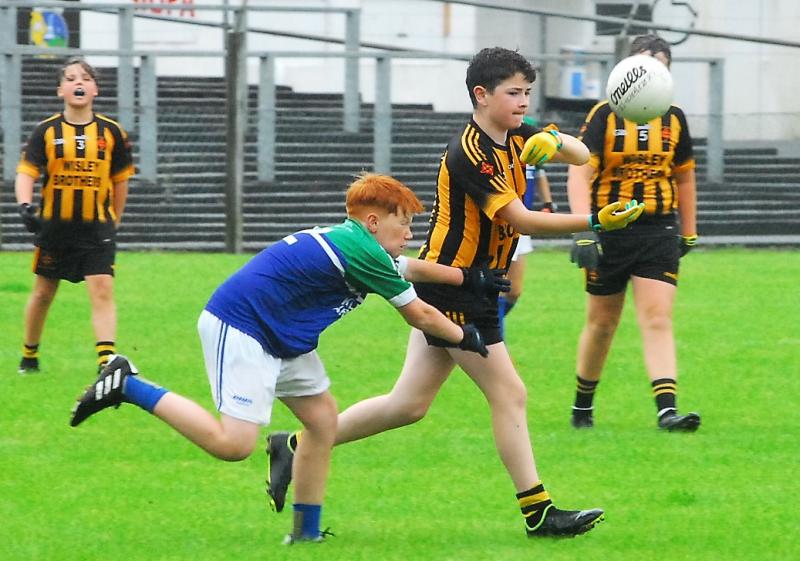 Played in dreadful conditions, it was no wonder both teams struggled to show what they are truly capable of but it didn't stop them giving their all in a battle that swung one way and then the other.

Mac Diarmada Gaels dominated long stretches of the game but couldn't match the start and finish of St Joseph's that saw them take the title.

St Joseph’s got off to a blistering start with Conor McCabe opening the scoring with a good point before Darragh McBrien grabbed the resulting kickout and soloed in after three minutes to goal. McBrien added a point four minutes later as St Joseph’s were well in control.

But Mac Diarmada Gaels were beginning to find their feet and were unlucky to see Aherne hit the side netting before Maguire pointed after a quick free. Theo McLoughlin had a shot saved by McManus but two excellent points from Robbie Prior and Senan Lee had the Gaels just a point in arrears at halftime.

St Joseph’s led 1-3 to 0-5 at the break but less than 40 seconds after the restart, the teams were level when Maguire scored a fine point from distance. The youngster added a free to put Mac Diarmada Gaels in front a minute later but they missed a glorious opportunity when Brian Aherne blasted wide after Maguire & McLoughlin passes set him free.

Mac Diarmada Gaels keeper Rian Murray made a good save to deny Adam Lunney and St Joseph’s had a few costly wides before McBrien tied up the scores once more 12 minutes into the second half only for Stephen Kellet to fire a long range free to put Mac Diarmada back in front.

The drama started to rise when Jamie Kilgannon’s great run ended with Darragh McBrien firing the ball to the Mac Diarmada net. Maguire added a point that was initially waved wide after hitting the plastic post that bent and buckled but referee Jenkins awarded the score.

Mac Diarmada Gaels drew level with five minutes left in the half with a good point from Jacob McTague and they seemed to have timed their burst to perfection when Senan Lee blasted the ball to the net two minutes later after an initial shot came off the post.

St Joseph’s first attempt to get back into the game resulted in a Conor McCabe wide but the youngster made instant amends with a great goal after good work from Kilgannon, tying the scores once more.

Luke Maguire missed a chance in the dying seconds to take the lead and St Joseph’s struck in added time, Cian Reilly doing remarkable work to win the ball to set up Darragh McBrien for a huge long range score while sub Sam Navickas set up Conor McCabe for the final score of the game.