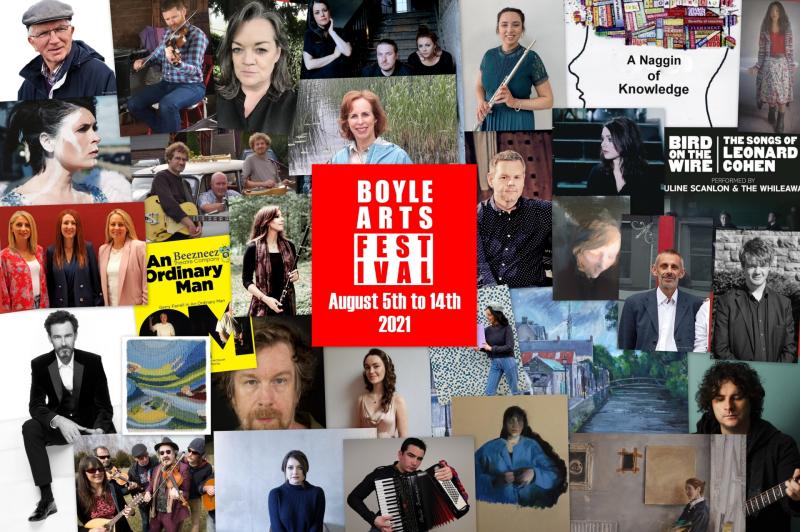 Boyle Arts Festival continues this weekend until August 8, while a selection of special online events will run until August 14th. The visual art exhibition ‘Crossings’ will continue in King House until August 31 while the local Art Trail, featuring visual art from a number of local artists, can be found in various premises and windows, all over town.

All of the music, drama and spoken word events will take place in the new venue, The Marquee @ Quarry Lane.

Bird on the Wire – the Songs of Leonard Cohen will see singer Pauline Scanlon teaming up with The Whileaways, for an enchanting and atmospheric performance of songs by Leonard Cohen on Saturday evening.

Lizi, Lynda & Ceara are also back after five years and they will host an afternoon concert featuring some classic songs with modern and folk influences on Sunday, August 8. This concert will be preceded by the launch of a new song; ‘Sweet Rockingham’ composed by local man Cormac Callery, with music by Donal O’Connor and performed by Gráinne Caldbeck. Also look out for a concert by BAF veterans, The Men Who Knew Too Much, who will play at The Marquee on August 7.

Another one of our very popular events, 'A Naggin of Knowledge' is back again on Saturday, with eminent scientists, Professor Marina Lynch and Professor John F. Cryan. 'A Naggin of Knowledge' is one of our most popular events. The idea is to give a non-expert, lay audience an illustrated glimpse at new scientific discoveries that impact on areas of health that are relevant to all.  The presentations will be given in a non-formal and accessible way. This year we are delighted to welcome back Boyle native Professor Marina Lynch. Marina is a Professor of Cellular Neuroscience in Trinity College and she will be joined by Professor John F. Cryan. Originally from Castlerea, John is currently Vice-President for Research and Innovation at University College Cork, where he is also Professor & Chair of the Department of Anatomy & Neuroscience. 'A Naggin of Knowledge' will take place at 1pm on Saturday, August 7.

Author Louise Kennedy will read from some of her work on Saturday, August 7th at 6pm. Widely published in journals, she has written for The Guardian, Irish Times and BBC Radio 4. In 2019 and 2020 she was shortlisted for both the Sunday Times Audible Short Story Award and the writing.ie Irish Short Story of the Year. Her critically acclaimed collection ‘The End of the World is a Cul de Sac’ was published by Bloomsbury in April.

Laura Earley will discuss her photo-book ‘Roscommon’s Mosaic Tradition: Geometric and Artistic Mosaics in the North-West of Ireland at 1pm on Sunday, August 8. Laura is an Artist and Art Educator from Co. Roscommon and she was recently funded by Roscommon County Council to create and design a photo-book, based on the traditions of mosaics in Roscommon, supported by the Creative Ireland Programme.

The classical music programme will include ‘John Count McCormack – A Life in Song and Story’ on Sunday, August 8. Matthew Gilsenan from the internationally renowned Celtic Tenors will perform the celebrated songs of the great Irish lyric tenor John Count McCormack, along with a narrative of his life, accompanied by pianist Mairead Hurley.

For the inaugural King House Piano Commission 2021/21, a specially commissioned piece entitled ‘Sraith na Búille’ (The Boyle Suite) has been recorded and will be premiered on video during BAF 2021. The suite was composed by Dr. Ryan Molloy, who was the first recipient of the new award funded by the Arts Office of Roscommon County Council together with the Arts Council of Ireland, in collaboration with Boyle Arts Festival and in association with the Contemporary Music Centre. Performing with Dr. Molloy are Mossie Martin (fiddle), Alan Kelly (accordian) and Steph Geremia (flute). The video was recorded in beautiful surroundings of the Main Salon in King House and will be broadcast next week.

Local musician, Donal O’Connor has also been commissioned by Boyle Arts Festival to compose two exclusive new songs about Boyle.  ‘I Am the River’ and ‘The Queen of Main Street’ will also be premiered on video during BAF 2021. Look out for videos too by harpist, Amy O'Neill performing in Frybrook House, along with artist talks by Susan Mannion and Laura Earley.