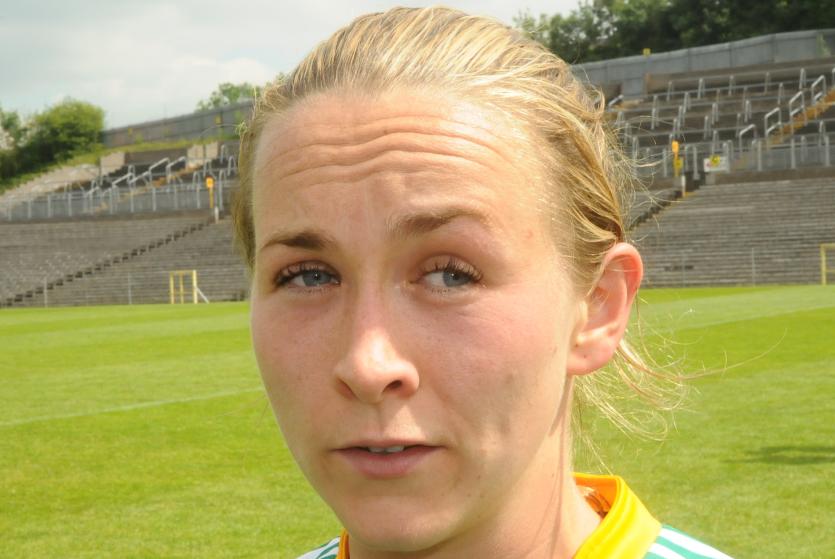 Tough job speaking to the media after losing a Lidl Ladies NFL Division 4 Final you were expected to win but Leitrim captain Clare Owens was in a philosophical mood as she took questions from the Leitrim Observer, stressing that the Green & Gold Ladies can still build for the future.

In fact, the St Joseph’s players final words probably summed up her attitude after the disappointing 4-9 to 1-14 loss against Louth in St Tiernach’s Park in Clones: “Obviously it is very disappointing, it would be strange if it wasn’t but we’re not going to let it set us back too much. As I said, we’ve made a serious amount of progress and we’re hoping to build on that from here.”

“We did give it everything and if we could have done that a little bit longer than 30 minutes, who knows where we would be now? But we can’t give a team like Louth as much of a run on us and expect to come out with a win.”

Indeed, Clare wondered if the eight point victory over Louth in the first outing of the campaign might have inspired the Wee County: “When you beat a team in the first round of the League, they are always going to be, probably, better set coming into a final against you because they had that loss.

“When you win, you think what more could we do, we beat them by eight points so we knew that was a cushion that probably wasn’t realistic. They were very, very ready for us today and yeah, hats off to them, they did their homework and they really, really choked us up in the first half. There were still the runs that we’ve always made, it's just they were well on top and able to deal with them. “

You wouldn’t be human if you didn’t wonder what might have been had some of Leitrim’s late chances found the net and the Leitrim captain is no different: “Absolutely, on another day you get those and you wonder how the hell you them so again, that’s just sport, it's why we love it. Some days you get those breaks, some days you don’t.

“Today we didn’t get those breaks but we went at them and gave it a shot, made the opportunities to take those shots. As I said, some days a goalie pulls off a great day, some days it ends up in the back of the net.”

The championship is fast approaching and Clare wants her teammates to turn their focus immediately to their Intermediate campaign despite the pain of defeat: “Next year is a long way away so even if we had gained promotion on this day, we’d still be focussing very much on the intermediate championship.

“I think we can give it a really good go ... loads of progress made but as I say, we do need to put together a more complete performance, we’re still looking for that. It didn’t happen today either. We keep working on a 30 plus minutes of a performance but if we put three-quarters together today, we could be in a very different position right now. “