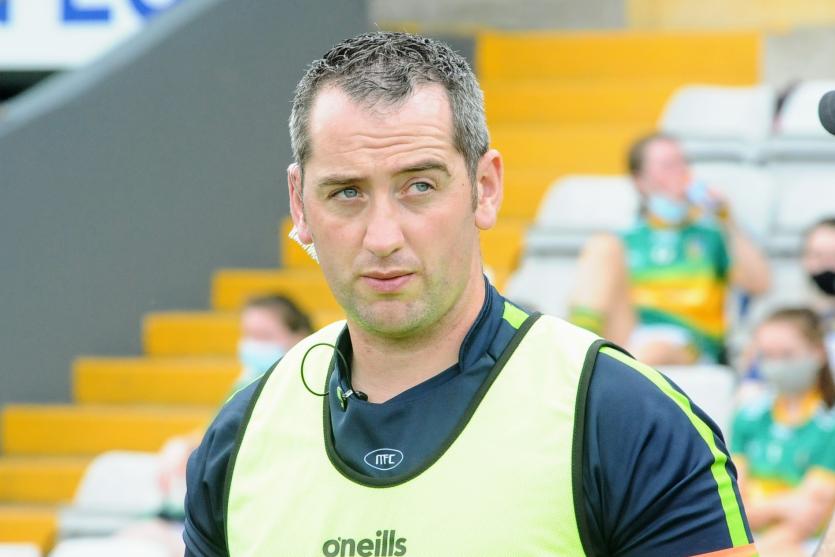 No feeling sorry for themselves, lots of regrets yes but a determination to learn from the experience was the message coming across from Hugh Donnelly as the Leitrim Ladies manager contemplated a deeply disappointing loss in the Lidl Ladies NFL Division 4 Final on Sunday.

Louth’s 4-9 to 1-14 victory over Donnelly’s troops in a sun-drenched St Tiernach’s Park in Clones left everyone associated with the Ladies camp shocked but the manager is determined that his players learn from a chastening experience.

Asked if nerves had played a part in Leitrim’s lacklustre performance, Hugh answered “You’re probably right but again that’s all about learning, all about development and this game today is all about the experience, it is all about what could happen on final days and if we don’t learn from this, that’s on us.

“We’ve got to analyse the game during the week and look at the elements, the key points of the game and we’ve just got to go again and we’ve got to just push on and push for the championship again. We have to learn from it, go back and analyse it and take something from it because if we don’t take something from it, we’re not going to learn and develop as a team or as individuals.”

And it is obvious Hugh believes his players are capable of that and more as, when asked if it would be difficult to pick them up ahead of the championship, he replied “No, I don’t think so because it is there if we want it. As I said in the huddle, we have a decision to make - either we go at this again or we don’t and if we want to fall into previous Leitrim cultures, it is not going to happen.

“We’re going to lift ourselves - we’re going to enjoy tonight and let them have the week off and go at it Friday night again. I personally don’t think there will be any issue because I’ll tell you why, we want to right the wrongs from today. We knew we underperformed and I certainly want to, as a coach, as a manager, go out and prove again that we’re better than that and we’re capable of, more importantly, playing for the full 60 minutes.”

If there was an aspect of Sunday’s game that did annoy him is that Leitrim didn’t show what they are truly capable of: “Yeah, that’s the disappointing thing. As I said before, I’ll take any beating from any team as long as we perform, you take your hats off to them and credit to Louth, they were tuned in today and they were, I suppose, just that little bit sharper.

“We under-performed, like we had done for periods throughout the year, to be perfectly honest, and today we were punished and you’ve got to tip your hat to Louth, they were a lot sharper and a hell of lot more clinical than we were in the first 17, 18 minutes and then we started to get to grips with it.

“That’s the way these finals can go and I can’t fault the girls for the second half performance, they dug deep and pushed Louth right to the very end. We hit the post, their keeper pulled off three or four very good saves. We could have probably ended up stealing it if they would have gone in but it is what it is.”

“You can count on luck all you want and you can make your own luck to a certain degree but the bottom line is we didn’t do what we were supposed to do and we struggled for long periods of time, coping with their forwards and we had to make switches early on. Again, a lot of credit goes to Louth, they were sore after that defeat in Ballinamore and they reacted.

“As I said, the flip side of that is I can’t fault the girls in the second half, they battled hard, we created lots of scores and scoring opportunities. Unfortunately, some went in and some didn’t.”

Leitrim’s late revival almost stole the show but Hugh credited Louth for having done their homework to stop the Green & Gold’s surging runs that normally yield so much dividends: “I’ll tell you what played a lot of part in that. From a Louth point of view, we knew that if we could just start getting them goal chances, that will creep into them because they were punished before in Ballinamore so we knew that if we could just once get in close enough, that we could turn the screw because it has happened before.

“That means that we were chasing the game and we started to force things then and when you started forcing things, what should have been a 70-30 ball becomes 60-40, 50-50. Small things, small areas of the game but again, it is a learning experience.”