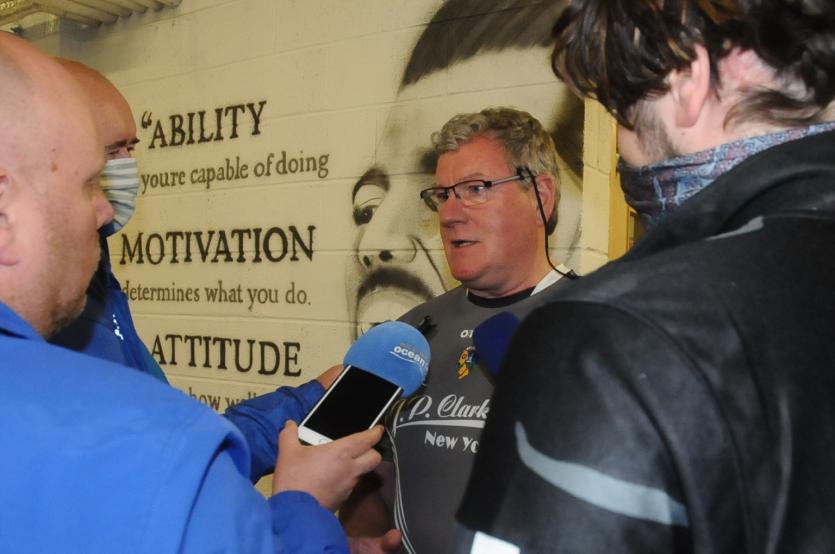 Terry Hyland will sit down for discussions with Leitrim GAA County Board officials before making any decision on his future as the County Senior team manager.

The Leitrim manager told members of the local media that he would have discussions with the County Board and “we’ll take it from there” after Sunday’s 5-20 to 0-11 Connacht Senior Championship Semi-Final defeat at the hands of Mayo in Elvery’s Mac Hale Park.

With emotions raw after the bruising defeat in Castlebar, Hyland managed a joke “I didn’t notice a hesitancy” when the Leitrim Observer said they were hesitant to ask about his future with the Green & Gold. But true to form, Hyland didn’t duck the issue.

“As regards where I’m going after this, my conversation will be with the County Board, that’s the way it will be,” said Terry, “It was the same when they asked me to come into the job, it will be the same if I am going to stay or I’m going to go.

“I’ll sit down and it is a bit like talking to you lads, I will break down where I see it needs to be sorted out, I’ll ask them questions and sure we’ll take it from there.”

“I like to see a group gaining ground and carrying on and, ok, getting the best resources they can but also, they have to push themselves.”

Hyland also stressed that everybody needs to be pulling in the same direction but Leitrim still face an uphill battle in terms of strength in depth: “With any group, you put 20 people in a room, I mean 60% are going to be all pushing, 20% are going to be somewhat and unfortunately there is another 20% that is in between.

“It is that last 20% you need to get with you and, as a group for them to improve, that is what you need them to do. In Leitrim, we only have the 20 people, we can’t suddenly look back and say there is another 40 more out there, they’re not, they’re not out there.”

SEE WWW.LEITRIMOBSERVER.IE AND THIS WEEK’S LEITRIM OBSERVER FOR MORE ON SUNDAY’S MATCH