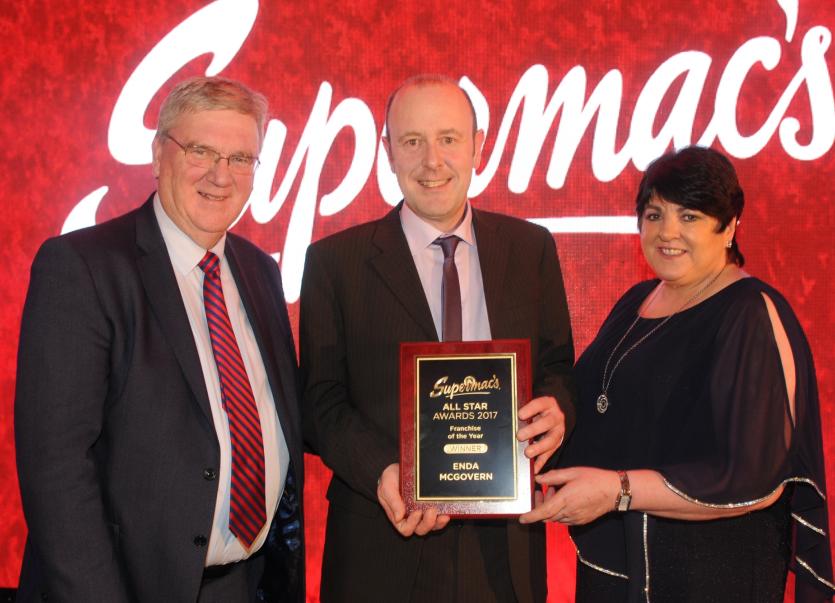 Pat & Una McDonagh, MD of Supermac’s, presents Enda McGovern (centre) with the prestigious Supermac’s Franchisee of the Year Award at their Annual All Star Awards.

Enda McGovern, owner of Supermac’s Carrick-on-Shannon, won the Franchise of the Year Award at the Supermac’s All Stars Awards event in the Loughrea Hotel and Spa on Tuesday, Jan 23.

The outlet received the award for outstanding achievement in service, operations, marketing and public relations. Enda is a franchisee with Supermac’s for the last 21 years and has over 30 employees.

Speaking at the event Supermac’s MD, Pat McDonagh, paid tribute to Enda and his team by saying that the outstanding achievement reflected the hard work that is needed in the current market. “I would like to congratulate all the winners at the Supermac’s Awards tonight,” Mr McDonagh said. “The food service sector is changing and it is testament to the work that is being carried out by our staff in the 108 outlets we currently have the country that we are still the publics choice when it comes to quality food at a reasonable price.”

40 years ago, Supermac’s first opened its door in Ballinasloe and a year later made its first venture outside of County Galway by opening an outlet on O’Connell St in Ennis. This year, the group of family restaurants chain will open 6 new outlets in the 1st half of 2018 bringing the total amount of outlets to 114.

The group currently employs over 2,700 people throughout the country.  Supermac’s also operates Papa John’s Pizza, SuperSubs and Macs Place Diners. The latest store to open was in Headford, Co. Galway. The Só Hotel Group as well as the Claddagh Group of Pubs in the United States are also owned by Pat and Úna McDonagh.

“We will be engaging in a major recruitment drive to get staff for these new openings,” Supermac’s MD Pat McDonagh said. “We have career opportunities at all levels. We are looking for staff in the area of managers, store managers, assistant managers and catering assistants. We put structured career paths in place for staff that leads to store manager positions as well as site managers and area managers.

"Some of the stores that are scheduled to open will be franchised operations and we are looking for people that want a career. People that will stay with us and develop with us. A lot of our franchisees are people that started working for us initially,” Mr McDonagh said. “We have an extensive careers page with testimonials from company and franchise staff and managers at www.supermacs.ie/careers.”