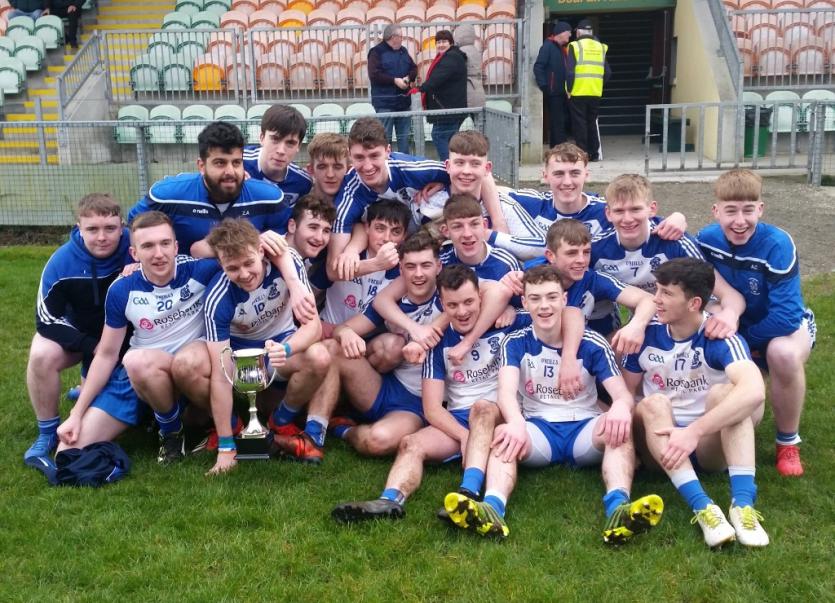 A clinical team performance from St Mary's saw them get the better of St Brigid's in the Liam Higgins Plumbing U-20 Championship B Final in Ballinamore on Sunday last.

Two goals from Jack Matthews and a fine display of free taking from Oisin Bohan helped St Mary's to what prove to be an uncatchable tally but the real strength of this St Mary's team was their collective strength throughout the pitch.

The full-back pairing of Fintan Earley and Patrick McKenna were both outstanding while the likes of Diarmuid Kelleher, Mark Diffley, David O'Connell, Jack Barnes and Ciallin Smyth all shone for the Carrick-on-Shannon club. 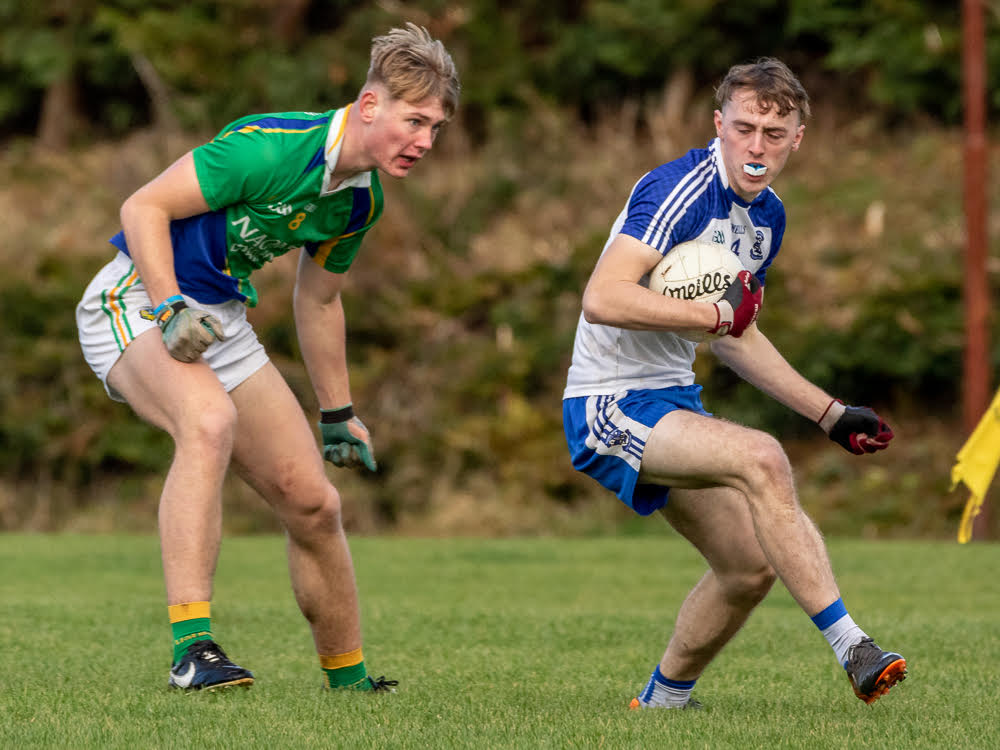 One of the real strengths of St Mary's is their cohesiveness, evidently a product of quality training alongside one another over a number of years.

Unfortunately for St Brigid's, an amalgamation of Aughawillan, Aughnasheelin and Drumreilly, playing with such familiarity among team mates is a much more difficult proposition when players are drafted in to play alongside one another as opposed to having played together over the course of a number of years.

There are a number of hugely talented players on the St Brigid's team but they will have no complaints about the outcome of Sunday's final.

While they enjoyed plenty of possession and trailed by just five points in the latter stages of the game, they were simply beaten by a better team. 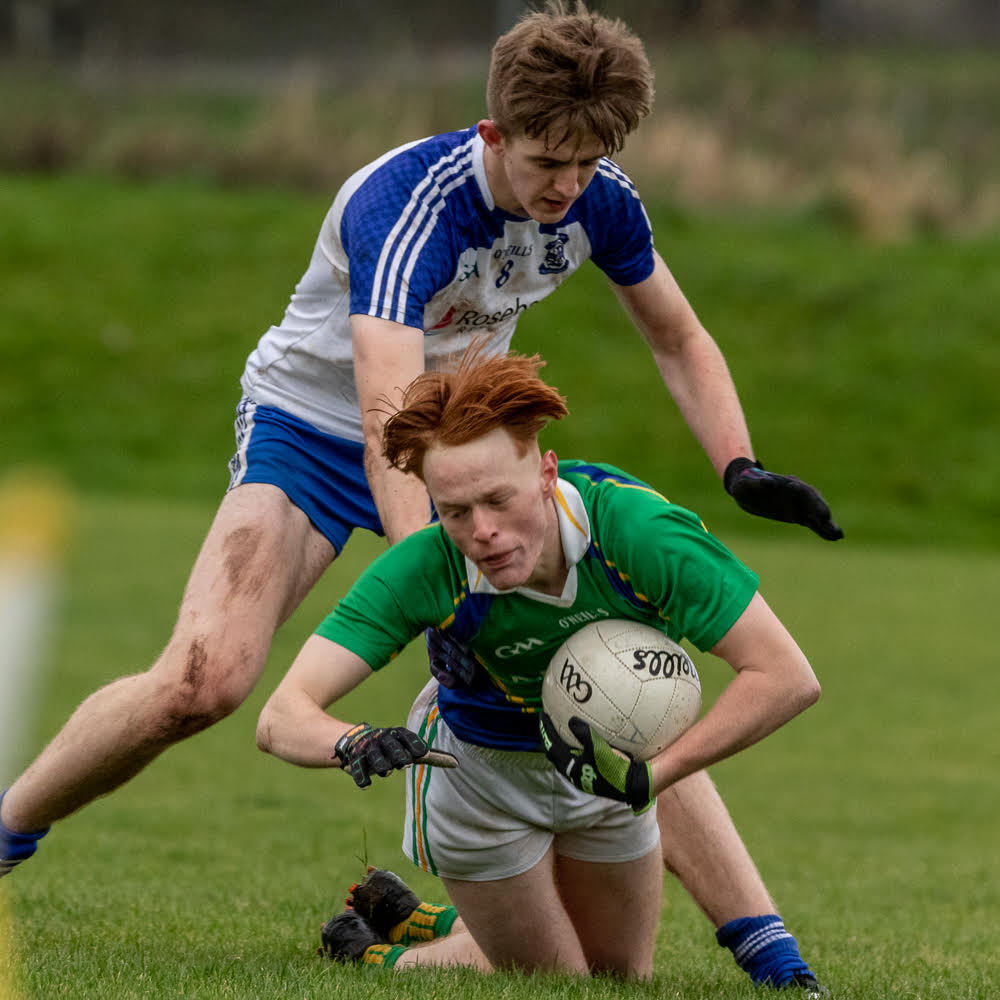 St Brigid's gave an indication of their talent as an attacking force within seconds of the opening throw-in. Stephen Meissener attacked dangerously and with real purpose and when the ball was worked to Dylan Maguire the midfielder applied a fine finish to open the scoring.

Ciallin Smyth levelled matters when he pointed after being found by Oisin Bohan and in the 10th minute St Mary's took the lead for the first time when Mark Diffley converted a free. Ultimately it was a lead they were to defend tigerishly for the remainder of the game and they never relinquished it.

Diarmuid Kelleher was heavily involved in the next score. The defender showed his ability at the opposite end of the pitch when he carved his way through the St Brigid's defence and was very unlucky to see his goalbound shot come back off the upright. Although Kelleher was unable to score, his good work was rewarded as referee Vincent McMorrow brought play back for a foul and Oisin Bohan duly converted to give St Mary's a two point lead. 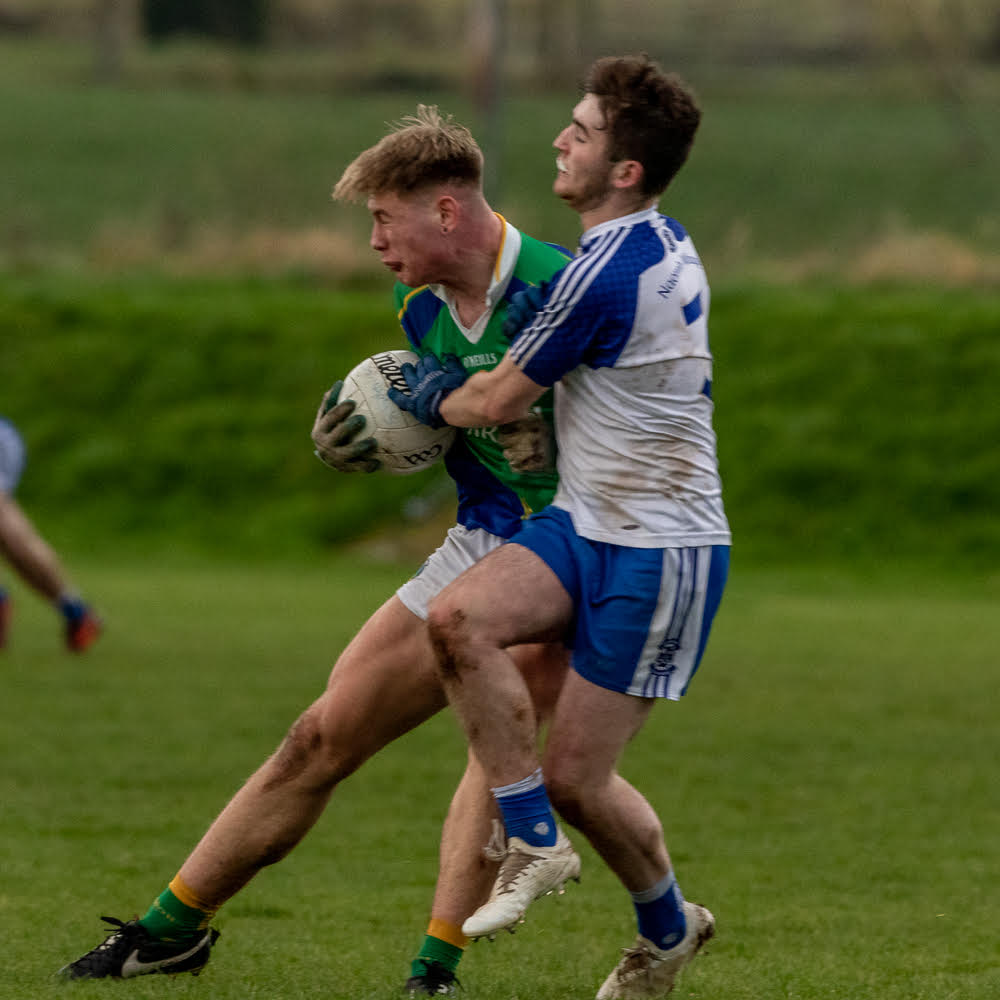 Another Bohan free after a foul on Zworar Ahmadi extended the lead further but St Brigid's responded well to the pressure they had been under.
Ciaran Cullen made light of the fact that he was closely marked, scoring a fine point and moments later St Brigid's came agonisingly close to scoring the opening goal with Cullen again heavily involved.

Aaron Hoare made an excellent catch in midfield and the ball was then worked to Cullen who attempted to fist the ball over the bar. Unfortunately for St Brigid's his effort came back off the post and none of his team mates were able to capitalise as the ball bounced in front of the goal before being cleared.

Oisin Bohan's third successful free of the half opened up a four point lead and that was quickly followed by a Ciallin Smyth point after an excellent catch from Jack Barnes with nine minutes of the half remaining. 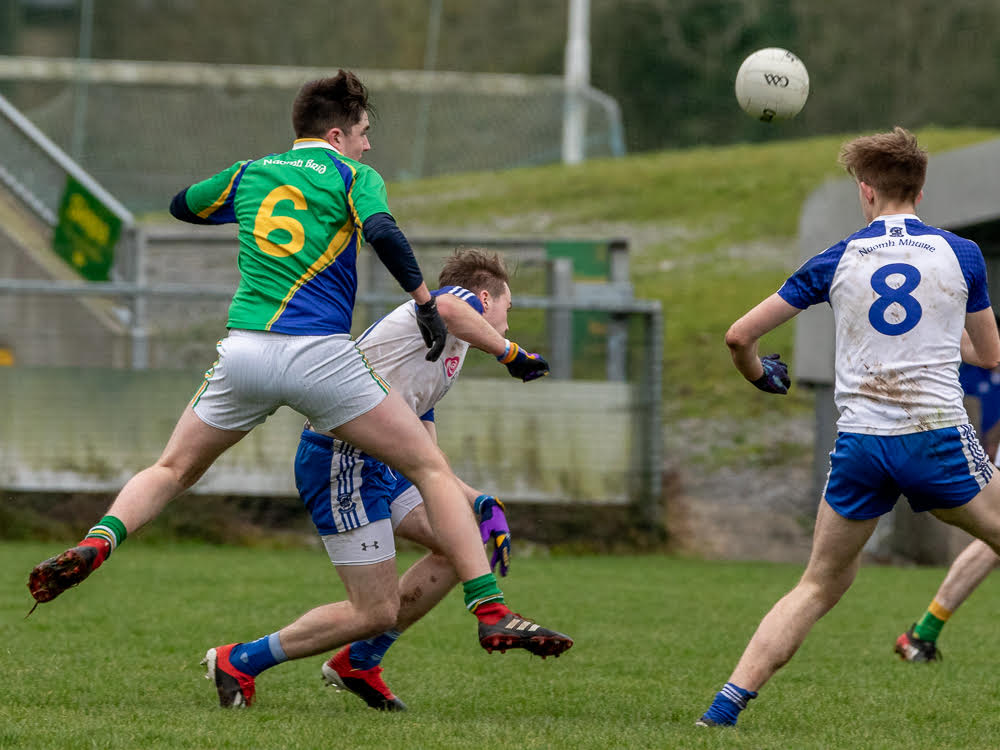 To their credit St Brigid's kept battling and they were rewarded for their efforts when Peter Prior scored an excellent long range score in the final minute of the half and that was followed by a Stephen Meissener pointed free in injury to leave the half-time score 0-6 to 0-4 in favour of St Mary's at the break.

The lead was extended shortly after the restart when Oisin Bohan converted a free after St Brigid's were penalised for an off the ball foul and just four minutes after the restart, St Mary's took a big step towards victory when they scored the game's opening goal.

David O'Connell's long range effort dropped short but was not dealt with convincingly by the St Brigid's defence and Jack Matthews met the dropping ball with a perfect volley that rocketed into the roof of the net. 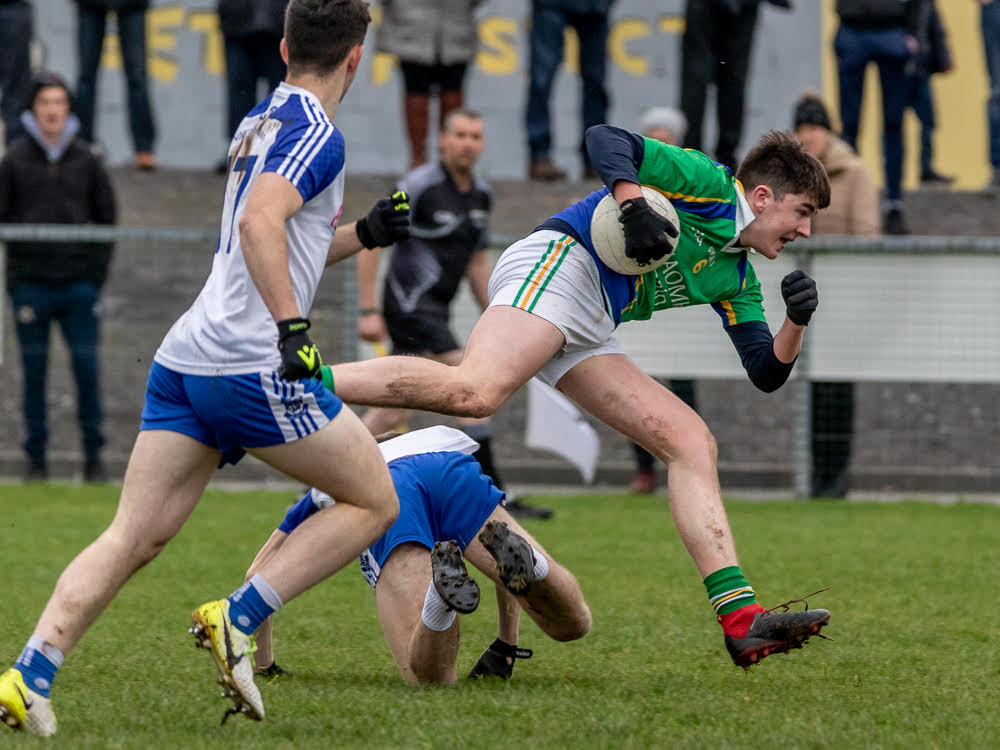 St Brigid's replied with a Stephen Meissener pointed free but St Mary's were now able to concentrate on ensuring they were watertight at the back and then dangerous on the counter-attack.

That tactic almost led to their second goal. After Fintan Earley won possession the ball was quickly worked to Jack Barnes and then to Eoin Lyons but St Brigid's goalkeeper Yann LeGuen was on hand to make a fine save.

Further points from Oisin Bohan (free) and Diarmuid Kelleher opened up a seven point lead but to their credit St Brigid's kept persevering and points from Dylan Maguire and another fine Peter Prior effort ensured they remained in contention as the game entered its final 10 minutes.

St Brigid's dominated the ball during the closing stages but clear cut scoring opportunities were at a premium and in injury time a patient passing move involving Eoin Lyons, Kelleher and McKenna was finished to the St Brigid's goal by Jack Matthews to secure victory. 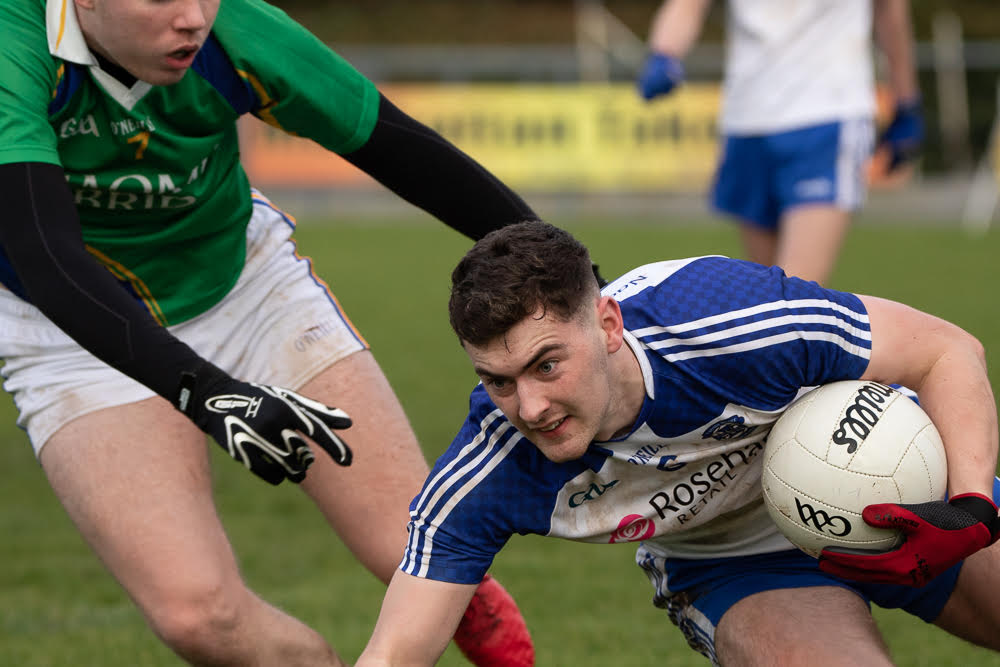 Main Man
There were a number of standout performances on the St Mary's team with Oisin Bohan, David O'Connell, Diarmuid Kelleher, Ciallin Smyth and Patrick McKenna hugely influential but Fintan Earley trumped them all with an outstanding display in defence. He read the game brilliantly and ensured a very tough afternoon for the St Brigid's forwards.

Talking Point
St Mary's deservedly triumphed with the players clearly showing the benefit of years of playing alongside one another. They were rock solid at the back, led by Fintan Earley and Patrick McKenna but all over the pitch their players were well versed in exactly what their jobs were and they carried out their roles out perfectly.

Turning Point
The game's opening goal, arriving four minutes into the second half helped St Mary's open up a five point lead which never really looked like being overturned for the remainder of the contest.

Ref Watch
Vinny McMorrow was on top of matters throughout and was quick to penalise off the ball and persistent fouling. One frustrating issue that arose was the referee having to remind players mid-game that the wearing of gumshields is compulsory.

Highlight
Jack Matthews' opening goal would be a highlight of any game. When the ball broke favourably for him he unleashed an unstoppable first time volley into the roof of the net.

Lowlight
While they were dogged and persistent the St Brigid's challenge never really ignited as would have been hoped.