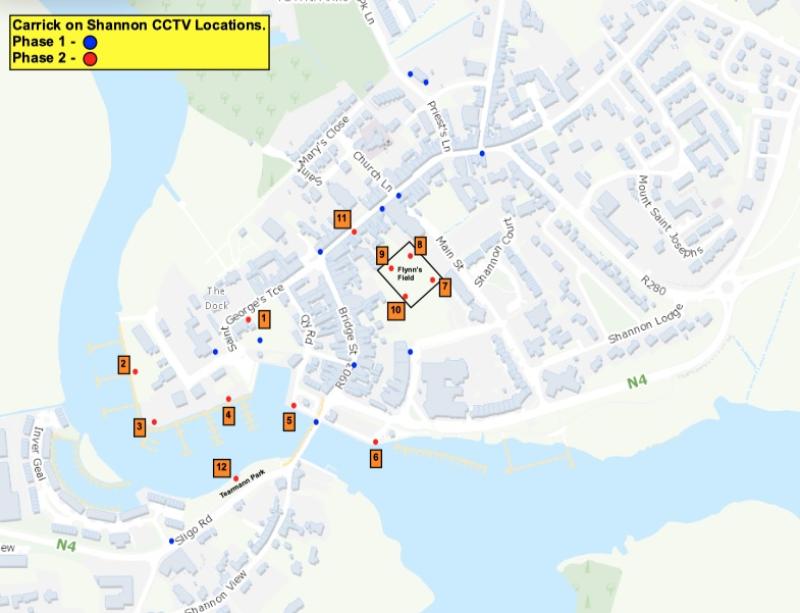 Phase two of Carrick-on-Shannon Community CCTV will see almost double the locations covered in the county town with 60 cameras recording 24/7.

The second phase which has been endorsed by the Leitrim Joint Policing Committee, Leitrim County Council and Sligo-Leitrim gardai will expand the current system by 25 cameras adding 12 new locations to the network.
Chief Superintendent Aidan Glacken said the CCTV system is a “welcome addition to policing.”
The first phase was installed on May 30, 2019 - it has 35 cameras covering 15 locations. The committee were informed by the end of 2020; Gardai said over 30 detections were directly attributable to the Community CCTV.
Gardai said the CCTV had increased efficiency and effectiveness of local policing and gave the force the ability to verify complaints.

The CCTV have also increased detection rates for crimes and minor assaults. The system allows people to use the town centre and feel safer and also deters criminals from carrying out crimes when they know their actions will be caught on camera.
Joe Dolan, the founder of the system in Carrick-on-Shannon said the system will help with “future proofing” the town.
Joe pointed out that tragically “we lost a visitor to Carrick earlier this year in the Shannon - five hours later his body was recovered.” He explained that six years ago when two Germans were lost in the Shannon “it took four days for their bodies to be recovered.” The CCTV system helped emergency responders to pinpoint the location efficiently.
He said Carrick is now a “textbook example of a good community scheme” and the town has hosted many other communities wishing to replicate the scheme.

Cllr Sean McDermott said the Community CCTV scheme needs to be rolled out to other towns and villages to help with the quick detection of crime.
Phase 2 will include new infrastructure in the town including Flynn’s Car Park, the new boardwalk and other locations not covered by the existing network of cameras. Gardai were involved in identifying the new areas that need to be covered.
Five of the new cameras will cover Flynn’s Car Park and three will be placed on the new boardwalk. Other cameras are set for St George’s Terrace, Main Street, Tearman Park Cortober, and two are planned for the riverside.

The application will now go before the Garda Commissioner before the community can seek funding from the Department of Justice.