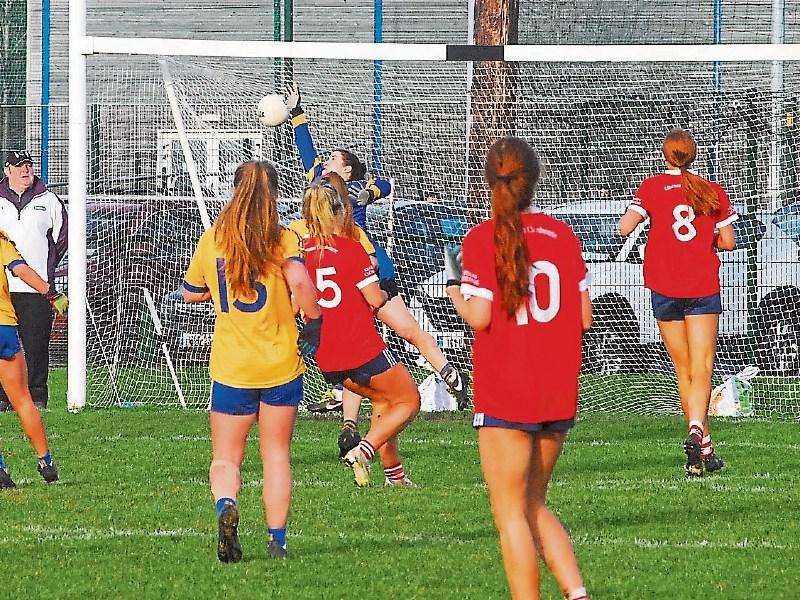 They poked the bear pretty hard in the first half but Glencar Manorhamilton found that the bear had real claws as Kilkerrin Clonberne delivered a tour de force in the second half to cruise to a comprehensive win in the Connacht LGFA Senior Club Final last Sunday in Swinford.

You'd have got long odds on such a scoreline at halftime as the Leitrim champions trailed by just three points at the break after putting it up to a Kilkerrin Clonberne side seeking a three-in-a-row and were it not for some costly misses, they could quite easily have been in front.

The worried expressions of Kilkerrin supporters said much for their struggles in the first half but after a stern talking to at the break, the champions bared their claws and struck with deadly force early in the second half, scoring an unanswered 1-5 in the first nine minutes.

In truth, the damage was done in the first half for as hard as every Glencar Manor player worked and as much pressure as they put on the Galway side, Kilkerrin's high pace and slick passing meant that the Leitrim girls were asked to dig deeper in a game that never paused for a break.

Kilkerrin Clonberne have obviously been playing at this level for a long time as they patiently pulled and dragged Glencar Manorhamilton's defence over and back across the field and literally gave them no rest at all. Their constant attacks and the high pace of the game was to tell in tiring Manor legs and once Kilkerrin got that bit of extra space and time, they pounced to deadly effect. 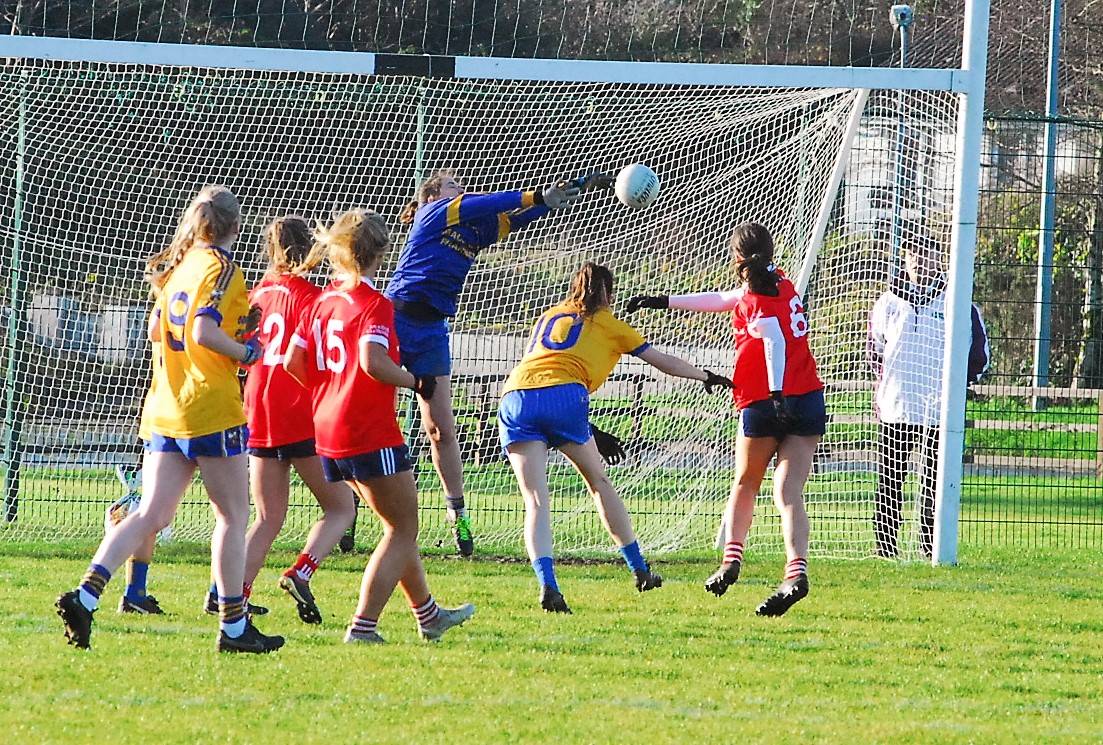 Glencar Manor have done that themselves to many a team in Leitrim over the past two years but they got a look close up at the standard the very best teams in the province are operating at.

When they look back on this game, Glencar Manor can truly have few regrets for they gave it their all but if they do, hard not to think it will revolve around missed chances during the first half when Kilkerrin Clonberne were down to 14 players.

The Manor girls missed three good opportunities for points and also had a gilt edged goal chance - if they were to shock Kilkerrin, they needed each and every one of those chances to be converted.

Truth be told, Kilkerrin Clonberne could have had a few more goals had they being a bit more clinical on the day!

Glencar Manorhamilton got off to a blistering start with Leah Fox and Ailbhe Clancy inside the first 90 seconds, although Fox was unlucky to see her shot rise high over the bar. An Olivia Divilly free cut the gap on three minutes before Muireann Devaney converted a placed ball.

Kilkerrin Clonberne were looking threatening with a great burst from Nicola Ward leading to a point from Chloe Miskell. The Galway side then lost a free for a player being too close and Glencar Manor went long, Ailbhe Clancy firing over on six minutes.

But the Galway side were slowly getting to grips with Glencar Manor's massed defence and incredibly high workrate with points from Miskell and Ailish Morrisey, both at the end of good moves, to tie the scores.

Glencar Manor got a boost when Kilkerrin defender Chloe Costello was sin-binned for a challenge on Leah Fox but the Leitrim team were unable to convert their numerical superiority into scores with Ailbhe Clancy and Leah Fox missing good chances.

Kilkerrin Clonberne were making light of their absent player with Eva Noone driving a goal chance over the bar but then the game took a turn on 20 minutes. Leah Fox's shot was judged to have taken a touch from a defender as it went out and Manor reacted quickly, playing a short 50 to Muireann Devaney.

The Irish underage soccer international burst past Kilkerrin full-back Sarah Gormally and despite a very tight angle, drove a powerful shot to the net in a huge boost for the Leitrim team. 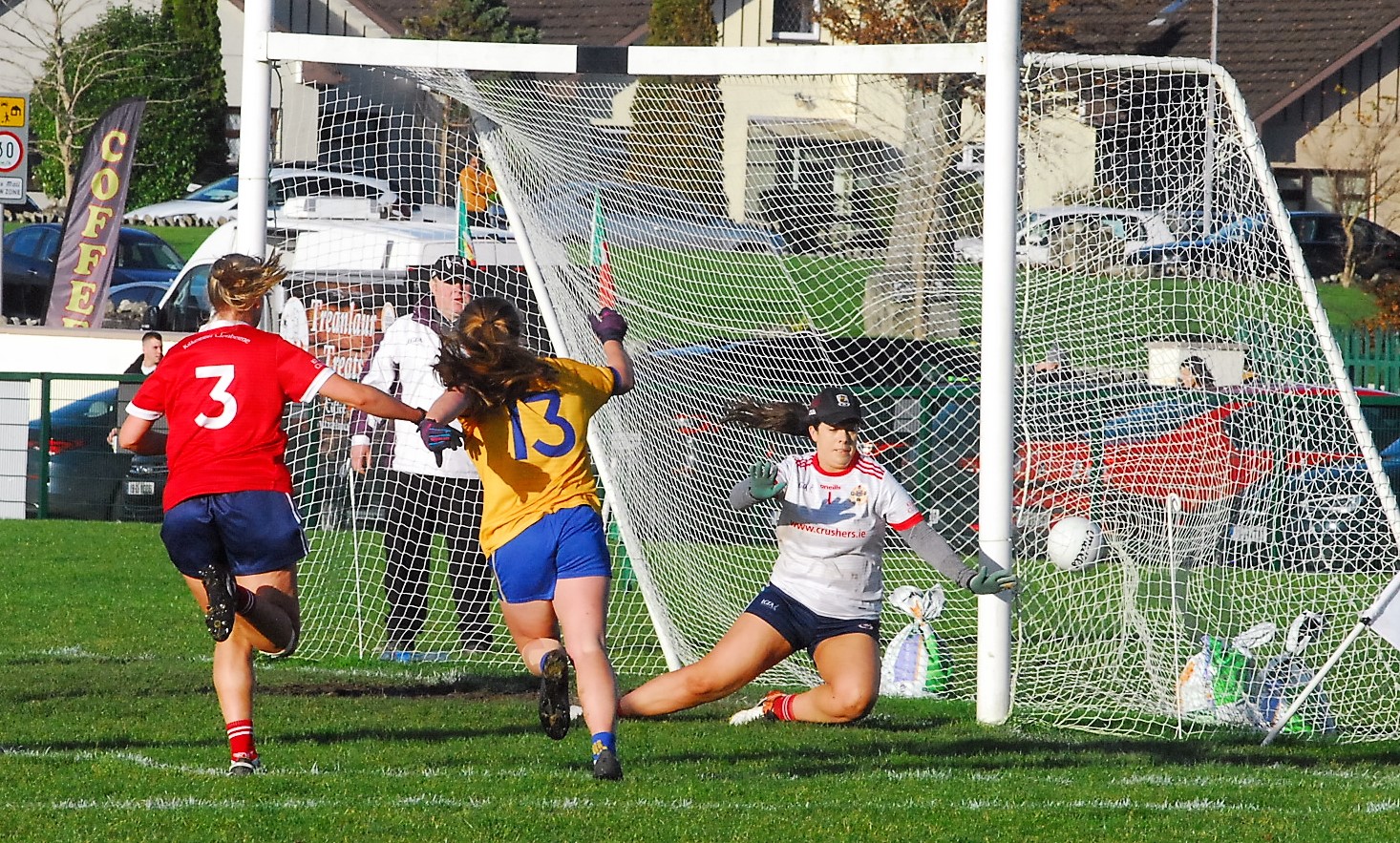 Eva Noone pulled back a point from a free but Manor were counting the cost of another missed chance when a high ball saw Devaney at first frustrated before she got the ball to Leah Fox with only the keeper to beat. However, Lisa Murphy advanced smartly to block the shot and a great chance was lost.

Ailish Morrisey tied the scores as Kilkerrin got back to full strength and they took control in the final seconds of the half. Leah Fox did well to win a free off Nicola Ward but the Galway star got instant revenge by smartly intercepting the free.

Her long ball was gathered by Morrisey and she quickly returned the ball to a charging Ward who sidestepped a defender and blasted the ball to the net from close range despite Michelle McNulty's best efforts to stop the shot.

Morrisey almost got a second goal for Kilkerrin just before the break but Glencar Manorhamilton would have been relatively happy to go in at halftime 1-7 to 1-4 down.

Glencar Manorhamilton knew Kilkerrin Clonberne would come out with all guns blazing in the second half but even they were taken aback by the force of the Galway team's start as they hit points from Eva Noone, Morrisey and Divilly inside the first three minutes.

Noone hit the post with a goal chance but the goal wasn't long in coming with Ailish Morrisey pouncing on a bad kickout and dribbling the ball in before finding the net on four minutes.

Morrisey & Noone added a point each before Ailbhe Clancy converted a free to end a 20 minute spell without a score for Glencar Manor. With the gap now at ten points, Glencar Manor were struggling as the pace and movement of the Kilkerrin players began to expose big gaps in the Manor defence.

The scoring rate slowed down but two Divilly points were followed by a Eva Noone goal after a frankly superb Kilkerrin Clonberne move on 22 minutes. Morrisey and Devaney swapped scores but that point, three minutes from time, was Manor's last with Kilkerrin Clonberne adding 1-6 before the final whistle sounded.

Morrisey plundered 1-2, Divilly scored two points and Eva and Hannah Noone both scored one. Glencar Manor never gave up fighting and even fashioned an injury time goal chance but keeper Lisa Murphy made easy work of Leah Fox's shot as the Galway side ran out comprehensive 25 point winners.