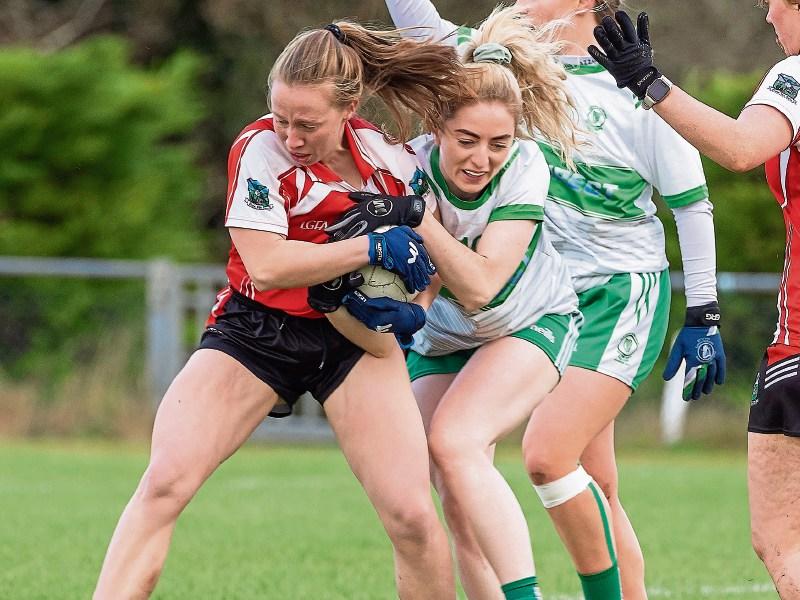 The winning margin does little justice to Dromahair’s efforts on the day as they were right in contention until they were hit with two late sucker punches, goals from Megan McCormack and a deflected Tara Phillips effort.

It was a cruel end for Dromahair who, with star forward Roisin Fowley again leading the way, traded blows with the Sligo and were only trailing by two points going into added time.

Unfortunately, Dromahair were probably without the full backing of their supporters with the clash with their Men’s team’s Connacht Intermediate Championship clash in Ballinamore splitting their supporters.

The game was well contested throughout and the Leitrim champions were well in contention for most of the hour. Both teams made light of the wintry, windy conditions early on to serve up a great contest.

Harps had first use of a stiff breeze and took an early lead with points from play from Megan McCormack, Lisa Casey and Roisin Molloy. But in their first serious attack, Dromahair equalised when their prolific forward Roisin Fowley finished to the Harps net.

Her sister Amy quickly added a point to leave the sides level at the first water break. After the break, Harps pushed ahead with two points from Lisa Casey and a well taken goal from the impressive Roisin Molloy to lead by 1-6 to 1-2 after 22 minutes.

But Dromahair’s ability to pounce for goals was really highlighted when they struck for two quick goals. Roisin Fowley pointed a 13 metre free before Dromahair were awarded a penalty which Brigid O’Reilly confidently stroked to the Harps net.

From the kickout, Dromahair got the ball back and quickly transferred it to Eabha Moyles who raised a green flag.

Eastern Harps were now struggling as the breeze advantage had waned but they got a huge boost when Roisin Molloy soloed through the Dromahair rearguard to slot to the net.

Dromahair hit back with another Fowley free, matched by a Lisa Casey point from play for Eastern Harps. However, the final score of the second half was a big one as Eabha Moyles pounced for her second goal after a pass from Roisin Fowley.

That left Dromahair with a 4-4 to 2-7 halftime lead but Eastern Harps began the second half with intent on reducing Dromahair’s three points lead. Lisa Casey and Roisin Molloy had points from play, to which Roisin Fowley replied with a point.

Leanne McGowan made a great run forward to set up Lisa Casey for another point and the home side took the lead when Katie Hannon crashed the ball to the Dromahair net to give her side a lead which they would maintain to the final whistle.

Roisin Fowley again pointed a 13 metre free to leave her team just a point behind at the second water break on a 3-10 to 4-6 scoreline.

Harps pushed ahead with points from a 20m.free from Tara Phillips and another point from play from Lisa Casey. Brigid O’Reilly had the losers final point before Harps closed out the game with two goals.

It was cruel justice on a fine Dromahair team who never gave up and were hardly deserving of the eight points final deficit.