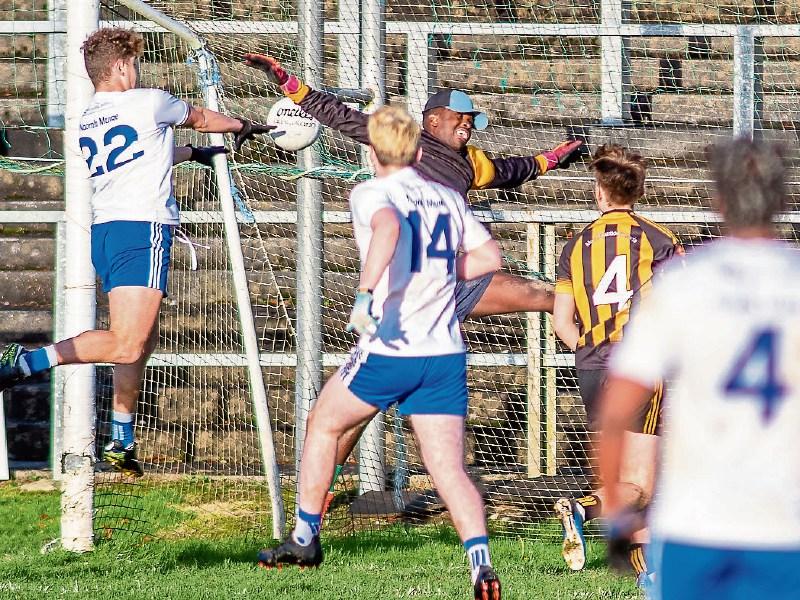 Hot favourites they may have been but St Mary's Kiltoghert needed a dramatic injury time goal from sub Brian McKenna to see off the challenge of an inspired and battling Mac Diarmada Gaels in last Sunday's dramatic U20 A Championship Final in Avant Money Pairc Sean Mac Diarmada.

Deadlocked at halftime, St Mary's looked as if they had surged to victory as they led by five points with 46 minutes elapsed but a furious and well timed Mac Diarmada Gaels surge saw the Kiltubrid and Ballinamore Sean O'Heslins amalgamation take the lead in the last minute of normal time to get one hand on the trophy.

But there was one final twist in a game full of twists with sub Brian McKenna managing to palm the ball to the Gaels net for a dramatic match winning goal. It was a heart breaking defeat for Mac Diarmada Gaels but Mary's showed great resolve to strike when it appeared they had let the title slip from their grasp.

Gavin Reynolds opened the scoring for St Mary’s after just two minutes but it was Mac Diarmada Gaels who were forcing the issue only to register some bad misses. Barry McWeeney had a wide, Paul Moran a goal chance while St Mary’s keeper Sean Reynolds did well to intercept a quickly taken free.

Danny McWeeney opened the Mac Diarmada account but they were hit with a body blow when Cian Singleton goaled for the Carrick men just ten minutes in with Paul Keaney quickly hitting two points, one from a free.

However, Mac Diarmada Gaels responded in style with Danny McWeeney sending the ball to the net with a point from Dillon Beirne ensuring that St Mary’s led 1-3 to 1-2 at the game’s first water break.

Sam Barnes was in the thick of it for St Mary’s, first getting fouled for a free that was converted by Paul Keaney before then earning a yellow card for a high tackle on Barry McWeeney.

Keaney added another point to his tally, perhaps lucky to get away with over carrying but Danny McWeeney replied for the Ballinamore and Kiltubrid men. And it was Mac Diarmada Gaels who were pushing hard towards halftime, forcing a good save from Sean Reynolds.

However, they did grab a second goal when Paul Moran finished to the net although another Keaney point ensured it remained all square at the break, St Mary’s 1-6 to Mac Diarmada Gaels’ 2-3.

If the first half was exciting, the second half left it in the shade as after Barry McWeeney and Paul Keaney exchanged early points, St Mary’s seemed to take control with two points apiece from Keaney and sub Jack Casey, Keaney then adding another to put the Carrick men five points clear after 16 minutes.

Two crucial points from Barry McWeeney and Paul Moran before the water break got Mac Diarmada Gaels back in contention and another free from Michael McKiernan increased the pressure but with eight minutes left, Jack Casey looked as if he had sealed it for St Mary’s when he blasted to the net.

However, defying their underdogs status, Mac Diarmada Gaels reacted with a ferocious push for victory - Barry McWeeney converted a free before joint captain Dillon Beirne grabbed a third goal for the Gaels, allowing the combo to tie the scores in the final minute of normal time thanks to yet another McWeeney free.

Mac Diarmada Gaels actually took the lead with a huge point from Paul Moran but St Mary’s demonstrated their own reserves of resilience with sub Brian McKenna managing to fist the ball to the Gaels net.

A late free got the gap back to a point but Paul Keaney, taking his tally to ten for the game, sealed a hard fought victory for St Mary’s with yet another point.