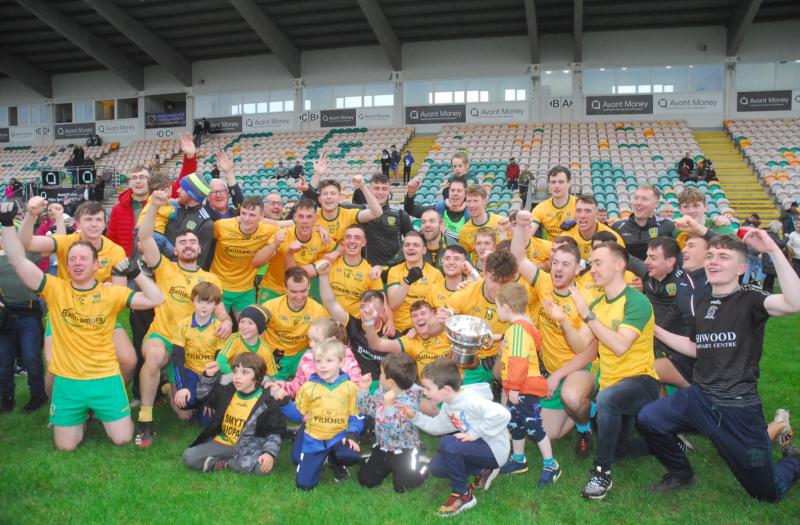 A Connacht Gold SFC Final that "earned well deserved rave reviews the length and breadth of the country" was the highlight of the adult club football scene in the county over the past year, writes Leitrim GAA County Board Secretary Declan Bohan in his report to Monday's Convention.

Commenting that the one-sided nature of the knockout stages was disappointing, Ballinamore Sean O'Heslins rip-roaring success over Mohill was a thrilling spectacle according to Mr Bohan: "What was largely disappointing at the knockout stages was the one sided nature of three of our quarter-finals of the Connacht Gold Senior Football Championship. This was compounded by a one sided semi-final but few could argue against the fact that eventually, the two best sides in the county qualified for the October 17 decider, holders Mohill versus a former kingpin, Ballinamore Sean O’Heslins.

"We were delighted to announce at that time that for the first time ever, GAA BEO was to beam the final out live to the nation. While the nation may not have held its breath waiting for this event to happen, we certainly did, in the hope that these two fine teams would perform to their true potential.

"They didn’t disappoint and after a rip roaring contest that moved from end to end, the young men from Ceannabo came with a perfectly timed late rally to snatch the title at the death. In doing so they ended 31 years of hurt and disappointment. If the people of Ballinamore were delighted with their win, we were most pleased with the spectacle that had unfolded in front of us and the quality and excitement of the final earned well deserved rave reviews the length and breadth of the country."

Declan also thanked clubs for their cooperation with restrictions on the presentation of Cups to victorious teams: "One final point I must mention at this stage is the near perfect compliance with the restriction that was placed on us with the retention of cups in the possession of the County Committee during the past season. #

"It is not easy to comply with this regulation, particularly if your club has won a trophy for the first time in a players living memory, but I feel it is important to highlight the general compliance and I thank club officials for their backing of this regulation."

The format of games and the home and away arrangements brought in due to Covid restrictions worked a treat according to the Secretary: "At the very outset I must compliment CCC for drawing up a games programme for our club players that was engaging, and excellently laid out across the available time frame that was allotted to them from June forward.

"Dealing again with a restricted calendar, I believe the format of competitions and the games they produced provided an adequate season of activity across all levels. Clubs having to play games without the availability of county panellists across a multiplicity of levels and codes proved challenging but by the time the last round and League Finals came around all were back playing with clubs and many before that.

"Of course CCC had to factor in the playing of three 2020 Championship Finals, in advance of the 2021 Championship season and we congratulate Gortletteragh, Aughavas and Mohill who took the Smith Monumentals IFC, Vistamed JFCA and B titles respectively in late July. Our Leagues yielded titles for Mohill, Gortletteragh and Drumkeerin across the Premier Leagues, with Reserve League titles racked up by Ballinamore Sean O’Heslin’s, Annaduff and St Patrick’s Dromahair.

"The 2021 Club Championship commenced in early August and despite a measure of predictability around some of the Group stage results, there were some thrills and spills for the last round as the quarter finalists were finalised.  Again we went with the groups games at home venues and this seemed to be very successful, both from an organisational point of view and the mutually beneficial financial aspect."

Looking back over the other grades, Mr Bohan commented that the knockout stages of the Intermediate grade were much more evenly balanced: "In contrast, the knockout stages of the Smith Monumentals IFC were, by and large, well contested across all knockout games. The surprise packets, Ballinaglera, produced valiant performances to reach the October 24 decider with St Patrick’s Dromahair.

"It was a bridge too far for them though as the finely tuned Dromahair outfit deservedly took home the Frank Reynolds Cup as Intermediate Champions for the first time since 2014. We look forward to their progress in senior ranks in the future.

"With three first strings in the Corrib Oil JFCA, it was always going to be interesting to see who would survive this competition. The fact that the Senior Finalists provided two of the ultimate semi-finalists is telling on the nature of grading at this level. As it turned out they met at this stage and Mohill prevailed to meet Glenfarne/Kiltyclogher in the final played on October 31.

"The strength in depth of Mohill proved far too much for Glenfarne/Kiltyclogher and they took home the title comfortably, following on from their 2020 JFC B success in July.

"The Corrib Oil Junior B decider went the way of Melvin Gaels as they accounted for a luckless Allen Gaels second string which was suffering its final second loss at this grade in four months. It proved to be a glorious year for St Patrick’s Dromahair as they claimed the Corrib Oil JFC C crown, making up for last year’s loss at the same stage, by accounting for Kiltubrid.

"We welcomed back Connacht Club action last month and while our representatives fell at the first hurdle, Ballinamore, Dromahair and Glenfarne/Kiltyclogher can be proud of the manner in which they represented the clubs of the county at Provincial level.

"The playing of the Under 20 Club Championships has yielded an A title for St Mary’s Kiltoghert over Mac Diarmada Gaels, C title for Annaduff over Glencar/Manorhamilton and the destination of the B crown rests between Leitrim Gaels and St Joseph’s on December 12, bringing the curtain down on the 2021 Club season.

"The above would not have been streamlined so well without, what I consider, a most efficient and proactive CCC. Hats off to Seamus McManus (Chairman): Vincent O’Rourke (Rúnaí): John Keenan [Rúnaí Smachta]: Patrick McMorrow: Micheal Doherty: Sean McGoldrick [Underage Fixtures]: Hilary Phelan [Coiste Iomána]: Eamonn O Grady [Referees coordinator].