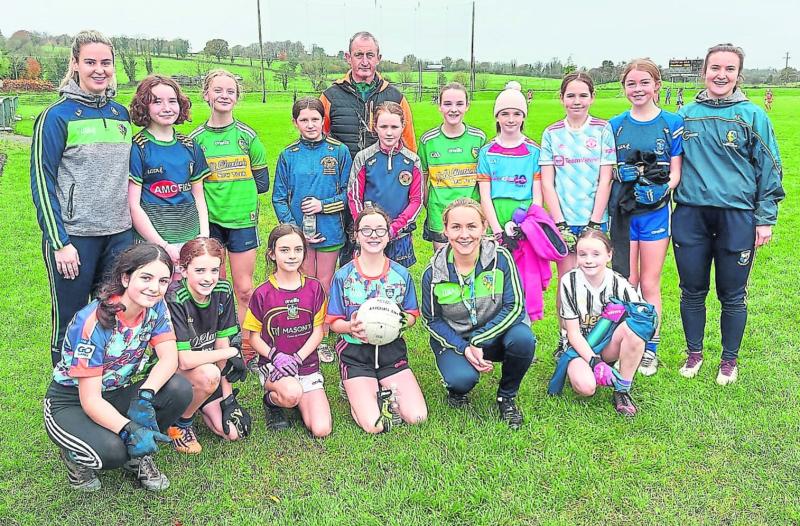 The following are the reports of outgoing chairperson Aidan Heron and Secretary PJ Ryan to the recent Leitrim Ladies GFA Convention which was held on Sunday December 12.

2021 has been a mixed year, maybe a continuation of 2020, due to Covid. For the Board and all involved with Leitrim Ladies, starting off from County underage teams to Senior, it wasn’t easy for managers planning around Covid. But managers did great work getting teams competing in Connacht Championship and they did their best.

It was a great finish for our Minors against Roscommon in the Connacht B Final, a great way for them to finish their campaign with that great win.

Our Senior team battled well through the League and didn’t make it out of Division 4 league structure. We had a great Championship and were unlucky not to reach the All-Ireland semi-finals. Thanks to our Senior team for great work on the field and off the field with help when asked.

I wish you and the management good luck in the Connacht Final on Sunday December 19, in Pairc Sean Mac Diarmada. I am sure you will give it everything and it could be a great way to finish off your year.

Well done to all clubs who competed in all competitions and congrats to all winners. I have to say the U12 Academy was a great success and much talent that we need to bring forward for the future of our clubs and county. Thanks to all coaches and county players involved which was enjoyable for players.

I want to thank all the people on the County Board, which includes our fixtures committee for the great work done in my time as Chairperson.

But there are clubs that need to give more help on the County Board instead of standing back and watching some us run off our feet and requesting unnecessary demands. I understand you have your clubs to run. I would encourage you to get more people involved at your club to share the load.

I want to thank our main sponsor Gotham Drywall New York for the much-needed help over the past three years which was greatly appreciated along with all our other sponsors of gear to our U14, U16 and minor teams as it is a difficult time for businesses.

I would like to thank our Board who did allow clubs to take in gate receipts during league and championship games, we do help clubs where possible.

As 2021 draws to a close on our Footballing year, I think it is important to reflect on the pressures and the stresses that the year has brought for all. 2021 again was a year punctuated by Covid-19 and the demands that it brought on people and on clubs.

Where once playing and training for  football was a matter of just packing the boots, gumshields there was now a little more preparation involved. We all became familiar with Covid declarations, Covid supervisors. It is to the testament of the clubs that they again handled all the extra workload that came with Covid so admirably.

Even though the season began late, the fixtures Committee managed to fit in all competitions, although not ideal for players to be playing a minor final in December as on Saturday December 12, Glencar Manorhamilton v Ballinamore Sean Heslins played in the last competition final in Leitrim Village but when you only have a number of months to fit in all competitions and are competing with GAA for pitches and referees, this becomes the outcome.

A successful year for our County Senior Ladies this year. Training during lockdown they returned to collective training in April. The Lidl National League began In Ballinamore with a win over Louth on 23 May, this was followed by three more wins over Derry, Antrim semi-final win over Limerick. A Division 4 National League final against Louth on June 27. Louth won on the day but I know the team are determined and will be back again as they have a positive determination to reach Division 3.

The championship began on June 27, with a tight win over Fermanagh followed by an excellent win over Division 2 Clare. This left Leitrim in an All-Ireland quarter-final against Kildare on August 8. A four-point loss meant the Leitrim season had ended.

But lots of positives to take from the season. Well done to the team who maintained a positive focus on maintaining fitness during the lockdown and done us all in Leitrim proud this year.

We are lucky to have a very capable and professional Coda Officer in place in Leitrim, we have had incidents referred this year to our Coda and they were investigated by the Coda and Hearings panel and penalties handed down. The coda is in place and when Referees or clubs refer them in the correct procedure they will be investigated. Thank you Coda Officer and members of the Hearings Panel for your time.

Leitrim LGFA began their U12 Academy this year. Spearheaded by Chairperson Aidan Heron and Liam Doherty, gaps in our underage development had been identified through consultation with club coaches and our Juvenile management teams at U14, U16 and minor.

Simply stated we have a smaller player pool and we need to start earlier and be smarter with our development. The underage academy brought 96 players from all clubs. These players were identified from U12 blitzes prior to the academy.

The Academy development comprised of four weeks of skills development, core work, warm up session development, and two weeks of games. A smaller group will be brought back in March for further development and this group will form the basis of our U14 team for 2023 season.

We will begin again next August with the U12 Academy. The development of underage players must begin at U12 level.

A word of thanks to the U12 Academy Coaches Liam Doherty, Aidan Heron, Shane Devaney, Kenny Casey, PJ Golden, Martin Doonan, Adrian Murphy, Stephen McWeeney, Stephen Morgan who made it possible for the Academy to happen. And to the Leitrim Ladies Senior team. Each week three players from the Leitrim Senior team attended and coached and mentored the younger players.

One area where I had been hoping for improvement was referee recruitment. Up to last year Rachael McPartlan was the sole new referee who had been refereeing in the last three years. We ran an online GO-GAMES Referee course with 12 participants. Three girls from that course went on to Referee during our new U12 Format.

They will hopefully complete the next course which will enable them to referee from u12 to u16 level games. Football can only continue if we have Referees; the continued recruitment and training of Referees is a priority that the Leitrim County Executive follow.

As I step down this year following on from three years in the role, I can reflect on my time in the position as Leitrim LGFA County Secretary. The role can be consuming, when football is at its busiest in the summer months, it does require time.

From what I can see, the County Board in Leitrim has been up and down over the years. County Boards and football function when there is stability within the Board and people there willing to do the work. I have been lucky as I have been a member of a Board with members willing to do the work and put in the effort working towards the best outcomes for football in Leitrim.

The people I have worked alongside had no agendas or tried to put the interest of their own clubs first; they put Leitrim football first. When you step up to become a member of the executive you need to be able to take a step back and look at what is the best outcome for the whole County and what is the fairest.

Our Chairperson Aidan Heron, who is stepping down this year after three years at Leitrim football, has to be commended in the time, effort, and the work he put in. He was fair in his outlook towards all clubs and wanted to promote Leitrim Ladies football all the time.

He has the same interest in the U12 footballer as the Senior County Footballer. He has had a hands-on roll the last number of years and has been pivotal in reviving the fortunes of ladies football, and securing sponsorship for the Leitrim Ladies Senior team each year.

Aidan you will be greatly missed in your role of Chairperson and a hard act to follow. I know you will still be involved with the Underage Academy. Enjoy your well deserved break from the County Board.

There wasn't an opportunity to fundraise this year so to have sponsors come on board and support us has been appreciated by Leitrim LGFA.

I would like to thank Breffni Early and his team from Leitrim Daily/Final Whistle for  the promotion of Ladies Football in Leitrim and the inclusion of the ladies clubs in the Championship book that he published this year. Thank you to John Connolly, Willie Donnellan from Leitrim  Observer for continued coverage of our games. Thank you PJ Leddy you and I had some good days out this year at Leitrim  ladies games, let’s hope they continue next year.

I hope that person’s step into the roles that are available on the Leitrim Ladies County Board and continue the work of facilitating and promoting Ladies football in Leitrim. Mile Buiochas.