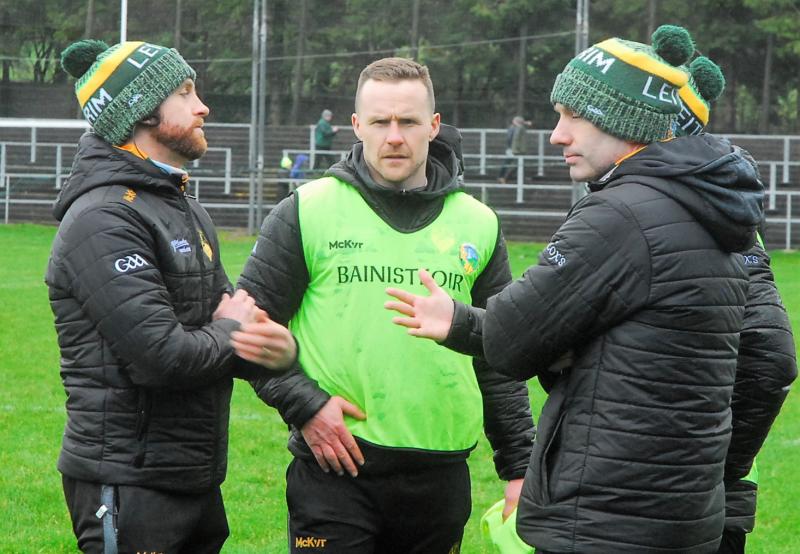 Victory last Sunday might have come down to something as seemingly insignificant as the coin toss at the start of the game but Andy Moran saw enough potential and promise in Leitrim’s performance against Cavan last Sunday to leave him a very proud man leaving Avant Money Pairc Sean Mac Diarmada.

Cavan were worth their 0-12 to 0-8 victory but the former Mayo Footballer of the Year stresses that both he and his players are still very much on the learning curve: “I think they won the game the way they used the wind. They won the toss and decided to go against it in the first half because they knew they had that bit of class to kick over the scores.

“Whereas in the first half, we were rushing maybe one or two bits but we will learn from that as well, both as a management team and as players.”

An animated presence on the sideline, shouting instructions into his players and disputing decisions with the officials, it was clear that Moran enjoyed his first League game on the sideline - even if he was unhappy with some of the decisions of Tipperary referee Sean Longeran.

“I thought some of the frees given to Ray Galligan in the first half were soft, in the extreme, particularly one coming in off the stand side where it appeared that a Cavan man lost the ball and all those little edges were vital throughout the game. We had a few altercations there but it was good fun.”

The Leitrim manager made the point that he will have to learn from the game: “You see there where Bruener and number 13 from Cavan, the name slips the mind, went down battling and their guy was on a yellow card and they were pulling him off straight away so there is cuteness there too, there are things to be learned.

“People think all the learning is on the field but there is learning on the sideline. You look at the likes of Ryan McMenamin and you try to learn from there.”

Defensively, the Leitrim manager was relatively pleased with his team’s performance but would like to see a better return in attack: “We conceded one goal chance where they fisted over the bar and that was from our mistake so the big thing is our defensive shape was good but we did create chances up top.

“If we were a small bit more clinical, we might be having a very different conversation. We’d be happy with the defensive shape and hope it is something we can build on next week, on to the Tipp game, on to the London game.”

Leitrim supporters wanted for a Trip to Tipp!

Looking ahead to the Tipperary game, consistency and repeating the performance from last Sunday down in Thurles is key according to Moran: “Hopefully we will have everyone fit. We had only one person out through a fitness issue today which was Evan Sweeney, the boys have done an incredible job, Daithi McCabe, Shane Bohan, over the last couple of weeks keeping everyone healthy and the aim is to go to Tipp with as many healthy players as we can.

“We ran the bench there today, we got five players on and I think they all did really well, James Rooney was really good when he came on, Quinn, Flynn, Keaney, Tom Prior, they all did their job when they came on. It isn’t great to see that in a small county like Leitrim, we can put 20 lads out on the field on any given day and they can all perform so why can’t we go from there.

“It is the consistency of the thing we’re trying to improve. Under Terry last year, there were patches in games where Leitrim were outstanding, the Antrim game in particular when Sweeney came off the bench and kicked 1-2, 1-3. Louth game the same, we were seven-six up and then it slips away so it is that consistency so we need to go to Tipperary next Sunday and produce that same level of energy and hopefully the crowd comes with us too.”

Asked about his emotions about his first time on a Senior inter-county sideline, Andy obviously enjoyed the experience very much: “I’m a bit green when it comes to these things, some will say there are cameras here and I don’t see that side of it until it happens but it was brilliant and I think the boys got a huge lift there off James Glancy and Barry McWeeney.

“At half one they were saying there was never that many people in for a whole League game let alone half an hour before the game. The people of Leitrim are stone mad about football, we just need to give them something they want to support and I think today is the start of that process.

“You can’t be but proud of that performance in terms of the energy, the enthusiasm and the tackling and what Bruen, Maguire, Casey and them guys brought to it, the guys in the middle of the field, I thought they were brilliant to be honest with you and it is a pity we didn’t a few of our chances that we had.

“In the first half, we have one or two overlaps where we could have goaled and got a chance but all in all, you want to win games but all in all, that performance I think, you heard the reaction of the Leitrim, it is something Leitrim were looking for and something the team wants to do for the supporters, give them a team to be proud of and I think we went the right away about doing that today.”