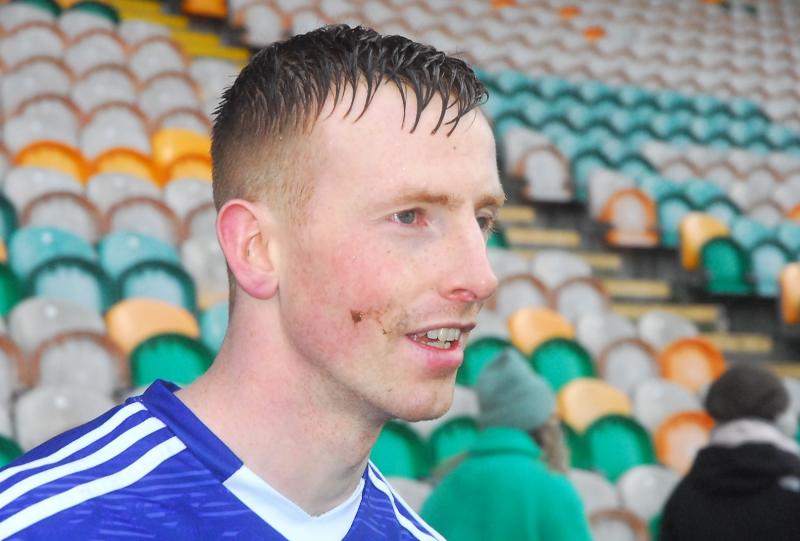 Forewarned is forearmed but when you hail from just across the county border with Leitrim in Dowra and actually played in the Leitrim colours on the County Vocational Schools team so it is no surprise that Cavan’s Jason McLoughlin knew exactly what was coming his team’s way last Sunday in Avant Money Pairc Sean Mac Diarmada.

An Ulster Senior and U20 medalist with the Breffni men, Jason won a Connacht Vocational Schools medal with Leitrim and often supported the Green & Gold in Pairc Sean in his younger days so the tough challenge Cavan faced last Sunday was exactly what he was expecting.

“We knew it was going to be a tough battle coming down here to play Leitrim,” Jason told the Observer, “I grew up following Leitrim and came to a good few games in Pairc Sean and the opposition never got it easy so we weren’t expecting any different there today.

“Conditions made it tough, we were just happy to grind it out and get two points on the board and that is all the matters today. Happy to get over the line.”

Having worn both Leitrim and Cavan jerseys, Jason wondered if a few of his fellow Breffni teammates might also have done the same! “There may be one or two more who pulled on both jerseys! Gunner there is close to Carrigallen, the Mullahoran lads as well but I would have played with one or two of the Leitrim lads as well.”

The Cavan corner-back acknowledged the impact new manager Andy Moran has had on Leitrim with Jason taking note of the excitement just across the border: “Absolutely, we saw the crowd Leitrim brought and the atmosphere, there was great backing behind Leitrim and great excitement and rightly so, they’ll push on for the rest of the League I’m sure and who will know what will happen at the end of the League.

“Andy seems to have brought a great freshness into the Leitrim set-up and there is great enthusiasm and obviously living in Dowra, you can feel the enthusiasm and the hype around and it is only good for Leitrim football.”

As for Cavan, Jason was delighted to emerge with the win after a traumatic 2021 that saw them relegated to Division 4 just a few months after the high of their Ulster championship win: “Last year was disappointing and a few bad League results there early on and it set the tone for the rest of the year.

“We were just hoping to get a win today by whatever way possible, get the two points and get the season up and running and that was all that was important today. There was a few times there the wind came in and it was tough going underfoot but it was the same for both sides, just happy to go home with two points.”