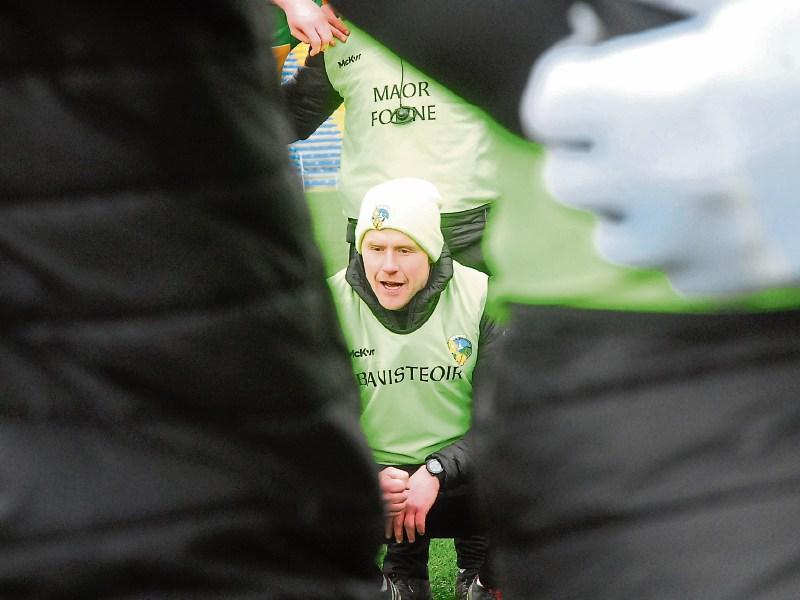 Manager Andy Moran in the midst of the Leitrim players following the win over Tipperary Picture: Willie Donnellan

When your new manager admits he needed 10 minutes to regain his composure after a win for the Green & Gold, it’s fair to say that Andy Moran is really invested in the fortunes of the Leitrim Senior footballers after the county’s first win since March 2020.

The 2-16 to 2-8 win over Tipperary marked Moran’s first win as Leitrim manager but the former Mayo star was conscious of the much bigger picture when asked how it felt to register the milestone: “I think it is bigger than that if I’m being honest with you. Yes, it is a league game, is the second league game but I think back to Declan Bohan’s speech at the Convention where he said we hadn’t won a game all year in 2021.

“We just knew we could put in that level of performance and I’m delighted to be honest with you. I stayed away from ye for about 10 minutes to get my composure. Leitrim football needed that and we needed that as a group.”

From Moran’s perspective, the win is a boost to a group of players who had endured a torrid time in recent years: “If you keep losing and people keep telling you that you are this, that and the other, you’re going to start believing it. We’ll take one game at a time. We did that against Cavan and I think you’ll see over the course of the league how well we did against Cavan.

James Rooney’s goal early in the second half gave Leitrim’s players an injection of confidence and it showed on the field: “I think you’re 100% right with the goal, it was just great to just see the boys feeding off that energy because, you know yourself, if you haven’t won a game in two years, winning is a habit and it is trying to get back into that habit. We’re nowhere near the finished article but we’re definitely on the right track.”

Going in at halftime with a three point lead was a big plus for the Leitrim manager but it was more the way Leitrim were performing that really got his eye: “I actually looked around to Mike Solan at about 20 minutes and I said I’d take it if we went in at halftime five-two up. We went in eight-five up so there were a lot of scores in those last few plays.

Check out the Leitrim Observer and our website www.leitrimobserver.ie to see who makes the 2021 Mens & Ladies Club Teams of the Year

“But it was the way we moved the ball - we moved the ball smarter, it wasn’t this 70 yards launcher into the forward line. We started to move the ball through the hands, using Ryan, using Riordan, using Keith Beirne and using our really bright players, Pearce Dolan who I thought had a really extraordinary game, Plunkett came into the game in that period as well, created one, scored one but it was the way we used the ball that got that gap for us and that three point gap was huge.”

Moran’s enthusiasm was clear as he discussed the performances of various Leitrim players starting with Ryan O’Rourke, switched back to half-back to deadly effect just before halftime: “It is quite obvious to us - and I’m going to call myself a Leitrim person - quite obvious to Leitrim people that he is a fairly talented boy.

“But then you have to realise he has missed two years of inter county football, you can’t just turn around and say I’m going to go in here as centre-forward and I’m going to run the game so sometimes you need a softer option and wing-back today was that and his performance today in the second half was incredible, like many others.

“I think the bench did really well, Tom, Paul Keaney, Donie, Mulligan coming back, setting up the second goal with a very similar pass to what Keith Beirne did for the first goal. The two of them are very bright footballers, very intelligent players and they released them. You had a bit a bit of energy around them like Tom Prior and Riordan O’Rourke and it makes a big difference.”

The Leitrim manager singled out two players for special mention - keeper Brendan Flynn and Dean McGovern: “I think Benny is an example, Benny will hold his hands up for that second goal, I think it was the first thing he said to me after the game. The two high balls came in straight afterwards, he claimed the two of them, got one of them right out to the sideline under huge pressure and got the other one out for a fifty .

“They were two big plays, they sneak a goal there, we are under a bit of pressure so I thought Benny symbolised the response to it and did really, really well.

“Dean gets taken off there at 45 minutes but that’s because that is where he is at in terms of his fitness level but he is building it all the time but I thought he was brilliant. The amount of cover he gives us and what he lets young Casey do in the game, he covers him when he goes.

“I thought Dean was excellent and then Domhnaill Flynn comes on and does a similar job - when you are taking off a big player in Dean McGovern, even though he is playing really well, it is important that the performance level doesn’t drop and Donie came in and sat into that role lovely.

“I was very impressed with Dean when I saw him playing with Ballinamore and then a couple of weeks later I saw him out coaching his U20s so it is something that is in his DNA so he loves football and he loves learning about it so that is a key thing for us.”