Tipperary back in promotion hunt as Carlow test looms for Leitrim 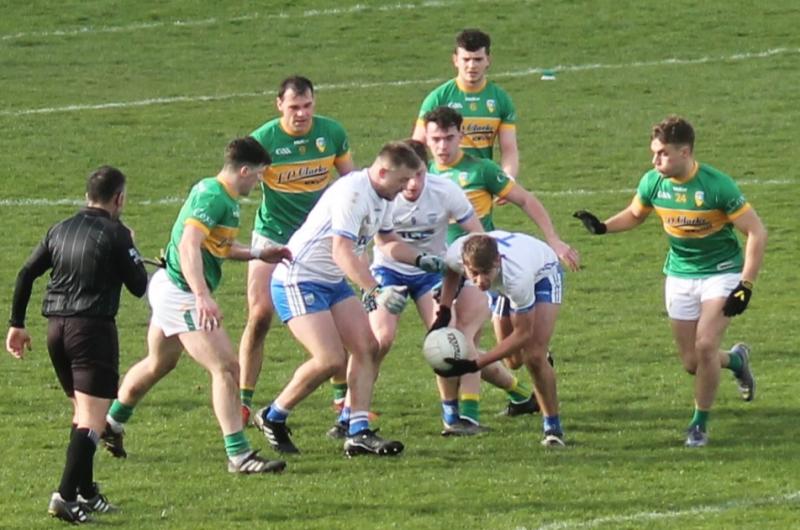 Action from Leitrim's recent win over Waterford in Dungarvan

Leitrim GAA fans are about to get a crash course in maths, permutations and scoring differences as this year's Allianz NFL Division 4 campaign becomes ever more thrilling.

The final sprint for those chasing promotion starts next Sunday with Leitrim fans growing ever more excited by the day as Leitrim travel to Netwatch Cullen Park in Carlow for a must win game (2pm throw-in). But the truth is that all counties are in must win territory and a single slip up could end a county's hopes of promotion.

Tipperary are back in the promotion mix but while they and London are both ahead of the Green & Gold in the table, looking at the games to come give a slightly different picture. Tipperary's 4-4 to 0-15 victory over Wexford adds to the mystery as Wexford, who would have been back in the promotion hunt themselves with a win last Sunday, were the better team for most of the contest.

Goals from Teddy Doyle (2) & Conor Sweeney in the first 20 minutes put the Premier county on top. Wexford went down to 14 men just before halftime but Tipp also lost Doyle just after the break.

Wexford, who visit Avant Money Pairc Sean Mac Diarmada on March 20, wasted at least four decent goal chances to leave the door open for Tipperary's victory. The Munster men face a difficult trip to Breffni Park next Sunday before finishing with games against Carlow and London.

Sligo's chances took a blow when Cavan proved too strong in the second half in Markievicz Park last Sunday, winning 1-13 to 0-10. Sligo led by six points during the first half but after trailing 0-8 to 0-4 at the break, Cavan turned on the style to run out comfortable winners.

Sligo will rue a red card on 38 minutes for David Quinn but with London (home) and Waterford (away) on the horizon, they will feel that they have just as good a chance as Leitrim of securing the second promotion spot behind Cavan when they host the Green & Gold in the final round of games on March 27.

With all the counties facing each other, victories over the next three games are an absolute must. Three wins for Leitrim would put Andy Moran's team right in the mix but should Tipperary also win all three games or London win two of their three games against Sligo, Cavan and Tipperary, Leitrim will face another year in Division 4.

The games left in Division 4 are: