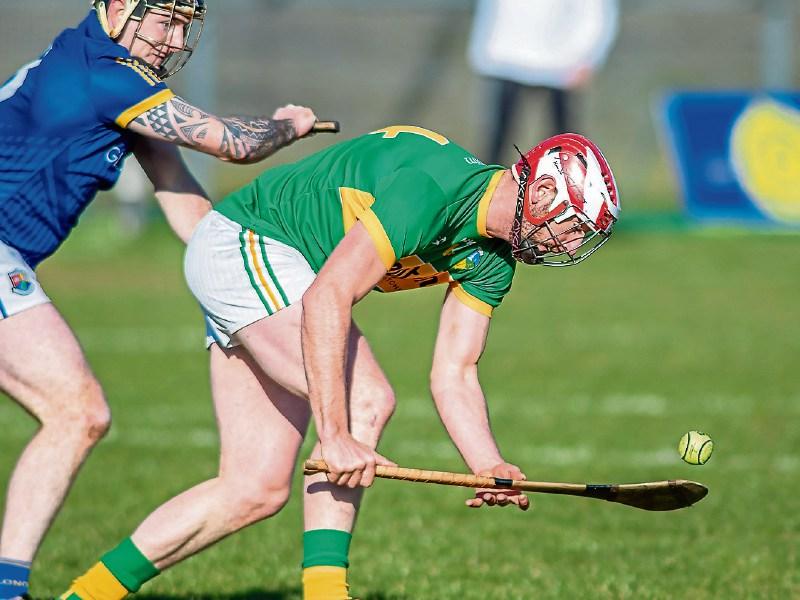 Hard to know how to feel after last Sunday's intriguing and superb Allianz NHL Division 3B clash in Glennon Brothers Pearse Park as Leitrim lost their unbeaten record but did enough to suggest that there is a lot more to come from the county hurlers.

In a tight, fast paced titanic struggle between two evenly matched teams, you couldn't say Longford didn't deserve their victory but few of the well entertained fans in attendance would have quibbled had Leitrim secured the draw their efforts probably deserved.

Longford's superior finishing on the day proved the difference but hard not to think that had centre back Karl McDermott not stayed on the field for the entire game, we would have had a much different result. McDermott turned his ankle just after Leitrim opened up a four point lead on 20 minutes and without his presence around the middle of the park, Olcan Conway's side drifted away from the contest as the home side took over.

Hard not to believe that the Cluainin player wouldn't have bagged a few long range specials himself but what Leitrim really missed was his accurate deliveries into his forward colleagues, too often the ball getting cut out by unmarked defenders. With goal poacher James McNabola also missing, it left Leitrim a little short of an attacking edge and Longford, with ace freetakers Joe O'Brien & Paddy Lynam in deadly form, took advantage.

Credit Leitrim in fighting back during the second half. Diarmuid Kelleher's goal was a bolt from the blue during a period when Longford were threatening to run away with the game and while Conway's troops drew level three times in the final ten minutes, the fact that they were chasing the game probably swung it in Longford's favour.

Yet even for all that, you have to say that Leitrim's performance hints at much more to come. Robbed of the presence of McNabola and McDermott, Leitrim were still more than competitive with a strong Longford side and you feel they would have no fear in taking on their neighbours in a semi-final or final in the next few weeks.

Leitrim already have their place guaranteed in the semi-finals but a win over Fermanagh in the final game of the Division on Sunday March 20, part of a double header with Leitrim footballers' clash with Wexford in Avant Money Pairc Sean Mac Diarmada, may just edge them straight into the final.

With both sides hitting early wides, Leitrim made their mark early with Martin Feeney striking a fine score from 40 yards before Sean Markham did well to fire over on four minutes. Longford responded with three points in under two minutes, one each from Karl Murray, Cathal Mullane and Paddy Lynam, the third from distance after a poor clearance.

Joe O’Brien and Gavin O’Hagan swapped frees before Delaney won a long delivery into around the square, he fed Joe Murray unmarked in front of goal but in one of those chances you regret afterwards, the Round Towers man saw his powerful shot skim the crossbar as it went over, rather than under.

It didn’t seem to matter at that stage as Gavin O’Hagan fired over two frees to leave Leitrim four points clear after 20 minutes. However, Leitrim did suffer a bad blow when Karl McDermott turned on his ankle and the Green & Gold would miss his driving presence from centre-back for the rest of the game.

Longford came back with two O’Brien frees before a wonderful move involving Delaney and O’Hagan ended with Murray firing over. Another sliding doors moment saw O’Hagan put a free wide with O’Brien replied instantly from a placed ball.

Leitrim’s Senan Keane lost the ball in the middle of the field, O’Brien driving through to fire the sliothar over the bar. And it looked as if Leitrim were in real trouble just as the game entered added time, a long free dropping short only for Michael Mulcahy to see his shot brilliantly blocked.

The ball fell to Cathal Mullane who saw his first effort blocked but his second beat Clement Cunniffe to give Longford a 1-8 to 0-9 halftime lead.

The only bright spot was a brilliant Diarmuid Kelleher goal, Joe Murray winning the ball on the wing and knocking it forward. The Carrick man picked up the sliothar, burst through a tackle and soloed in about 40 yards before unleashing a ferocious shot to the Longford net.

Leitrim began to find their feet once more when Gavin O’Hagan made a spectacular catch from a long delivery and fired over. Seconds later Sean Markham scored a brilliant effort from the corner to leave just a point between the teams with 17 minutes left.

Joe Murray converted a free six minutes later to tie the scores and from there to the finish, it was score for score with Longford having the final word. Murray and sub Liam Moreton responded to scores from Reuben Murray and Joe O’Brien to tie the scores. However, Paddy Lynam’s score five minutes from the end of normal time proved the difference and despite spirited efforts from the Green & Gold, Longford held on for the one point victory.