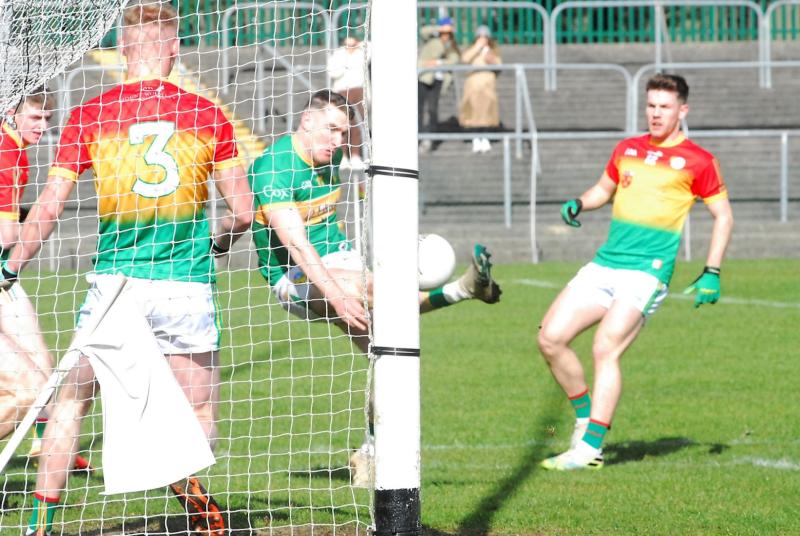 Keith Beirne somehow manages to hook the ball behind him for Leitrim's opening goal against Carlow Picture: Willie Donnellan

In a game much closer than the final scoreline might suggest, the class of Leitrim’s deadly duo Keith Beirne and Ryan O’Rourke proved decisive as Andy Moran’s team claimed a hard fought Allianz NFL Division 4 victory over Carlow in Netwatch Cullen Park on Sunday.

Trailing by a point at the break, Leitrim held the home side to a solitary point in the second half as their superior fitness, organisation and finishing ability proved too much for a game but inexperienced Carlow side to counter.

Keith Beirne was the headline star on the day, scoring 1-9 which included two wonderful sideline points and a stupendous goal that almost defies description as, with his back to goal, he somehow hooked the ball over his shoulder with enough power and precision to find the back of the net.

Ryan O’Rourke capped off another excellent display with a superb solo goal in the first half just when Carlow were threatening to take a firm grip on the game and his pace and mazy running gave Niall Carew’s team no end of problems.

Two clouds on the horizon were Tipperary’s unexpected victory over Cavan in Breffni Park and the concession of at least five good goal chances, two of which were clawed away by Darren Maxwell in just his second start but the fact that Carlow were creating them must cause concern for the Leitrim defence.

Tipperary’s victory, however, could prove far more costly as the Premier county men finish their campaign with two home games against Carlow and London and should their form continue, it won’t matter what Leitrim or Sligo do as the 2020 Munster champions will claim the second promotion spot. 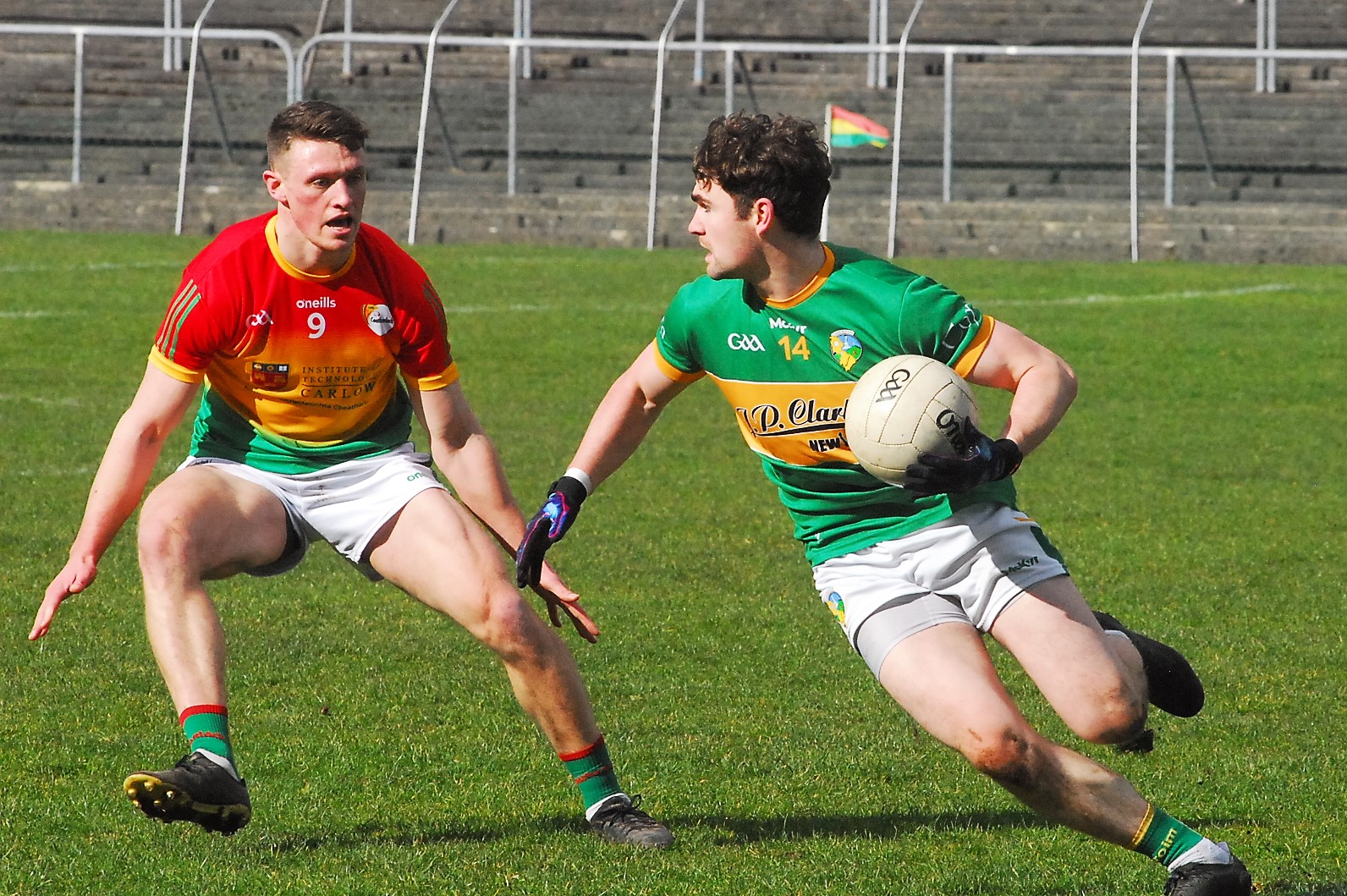 The early exchanges indicated the tight contest to follow with Colm Hulton opening the scoring only for Keith Beirne (free) and Donal Wrynn, on the end of a superb move, to reply. Jamie Clarke then scored a superb point for Carlow under massive pressure while Darragh Foley fisted a long delivery straight at Darren Maxwell.

Nine minutes in, blood sub Jack Heslin surged through the Carlow defence. The opportunity looked lost as the ball went across the face of the goal to Keith Beirne who had his back to the goal. Somehow, Beirne kicked the ball over his shoulder while falling backwards and into the net for a truly spectacular goal.

Carlow’s response was equally impressive as Jamie Clarke gathered a long ball and was taken down, the Carlow man picking himself up to send a decisive spot kick to the Leitrim net.

Carlow were on a roll and reeled off three unanswered points from Daragh O’Brien, Hulton and Foley from a free. Hulton’s point should have been a goal as he lifted his shot too high while Maxwell then denied the same played a certain goal on 16 minutes, Foley tapping over a resulting free.

Donal Wrynn’s point sent Ryan O’Rourke through for a point but a mark from Hulton kept the home side four clear. Two points from Beirne, one from play, narrowed the gap to two points but Carlow responded with a fine effort from Conor Doyle.

The game took a decisive turn in Leitrim’s favour five minutes from the break - there was little danger when Keith Beirne played the ball to Ryan O’Rourke in the left hand corner but he bamboozled two defenders, cut in towards goal and fired a rocket to the Carlow net to tie the scores.

Clarke almost broke through for another Carlow score but was taken down by James Rooney, Foley tapping over the free as the home side led 1-9 to 2-5 at the halftime break.

The second half was much slower to get going although Leitrim did think they had a third goal when Conor Reynolds palmed a ball from Ryan O’Rourke to the net but the Annaduff man did appear to be in the square long before the ball arrived.

It took a magnificent point from a sideline ball from Keith Beirne to get the scoring going on eight minutes. Carlow were now turning over the ball and making mistakes, a fact compounded when Foley put a free wide.

Beirne then added another superb curling effort from about 40 yards after Leitrim turned the ball over and with Carlow down a man with a black card for Eoghan Ruth, Leitrim were suddenly looking in control, a point confirmed when O’Rourke and Beirne both added to their tallies to put Leitrim three clear.

Leitrim’s smooth ride to the finish was complicated when David Bruen was black carded and Foley put over his team’s only score of the second half with just over 13 minutes to go. But a poor miss from a Darragh O’Brien free seemed to take the wind from Carlow and Leitrim finished the stronger.

Beirne with a free and Jack Heslin added points but Leitrim had some scares at the other end, Colm Hulton pulling a good shot wide while Ryan O’Rourke tapped over after Carlow keeper Ciaran Cunningham denied sub Riordan O’Rourke a goal after an incisive move.

Worryingly, with five points between the teams Carlow created two good goals chances but Conor Crowley and Jordan Morrisey both saw their on target efforts saved well by Darren Maxwell but the fact that they were created will not please the Leitrim brains trust.

Leitrim made sure of the victory with two late points from Beirne placed balls, the first from a free and the second a magnificent effort from the 14 yard line that even drew applause from Carlow fans over that side of the field.