Hurlers and Ladies aim for League Final spots next Sunday 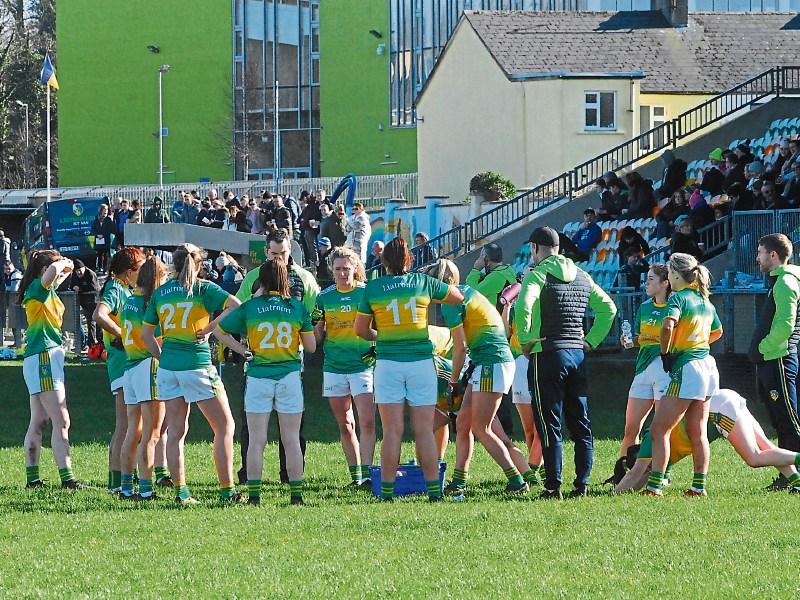 Leitrim ladies pictured during a water break in the clash against Antrim Picture: Willie Donnellan

Next Sunday is a big day for Leitrim hurlers and lady footballers as both face into games that, with a good victory, will see them straight into their respective League Finals.

Olcan Conway's hurlers and Hugh Donnelly's ladies trail behind the Senior men's football team in terms of public interest but the performances of both teams in their 2022 campaigns sees them on a cusp of reaching their League Finals.

The Ladies would be regarded as hot favourites to reach their League final but even if the hurlers don't win, they still have another chance as they will contest the League semi-finals but they will no doubt prefer the direct route to the Division 3B final.

On a hectic day for Leitrim teams, the hurlers are first up next Sunday when they host Fermanagh in Pairc Sheain Ui Eslin at 12 noon in Ballinamore and, if past meetings are any judge, it is sure to be an almighty battle.

Fermanagh top the group and are in pole position to go straight into the final but a Leitrim win would see them draw level on points with Fermanagh.

If Longford win, and they would be favourites to do so, it will come down to scoring difference but in the unlikely event Longford lose to Cavan, a win would put Leitrim into the final thanks to the head to head rule.

Even if Longford win, their scoring difference is a bit behind Leitrim so, provided Longford don't hammer the life out of Cavan, a seven point win would be enough to see the Green & Gold leapfrog the Ernemen in terms of scoring difference.

Of course, all that is easier said than done and Olcan Conway will hope that Karl McDermott and James McNabola are back from injury for this vital clash.

On paper, Leitrim's clash with Offaly in the Lidl LGFA NFL Division 4 seems a simpler as Hugh Donnelly's undefeated team take on Offaly in the semi-final in Kinnegad at 4pm as they look to get back to the final for the second year in a row.

However, Donnelly won't be overly happy with their draw in their last game against Antrim and will be looking to regain the form they showed in the opening round of the League against Fermanagh.

It was a problem Leitrim experienced in last year's campaign but in fairness to the Ladies, Donnelly experimented quite a good deal in the games against Derry and Antrim so expect to see a stronger line-up for the get-go for the game against Offaly.

The midlanders lost just one game in the group, going down 3-4 to 1-6 against Limerick, but they have been scoring well, registering totals of 4-10 and 3-15 in their other games so their forwards will take some watching.

Yet it hard to think that a more focussed Leitrim won't have the firepower with Michelle Guckian, Leah Fox et all in superb scoring form, hard to see the midlanders being able to hold them out.

Honestly, if both Leitrim teams produce what they are capable of, both the Ladies and hurlers are more than capable of reaching their League Finals.

The Ladies look too strong for Offaly and should advance to the final on the weekend of April 2-3. The hurlers face a stiffer challenge against Fermanagh but if they produce what they are capable of, they can certainly do it.