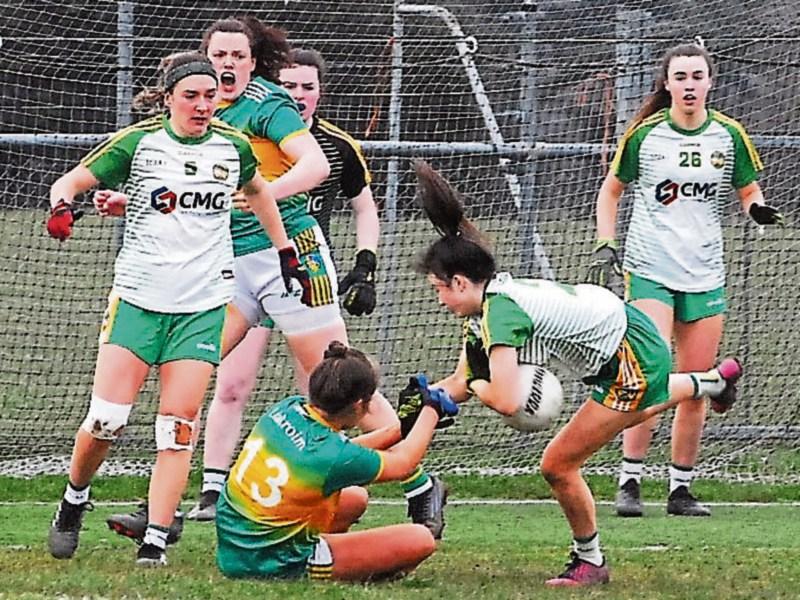 Sarah Reynolds hits the ground after a collision with Offaly's Nicole Buckley, an incident many felt should have resulted in a Leitrim penalty Picture: Willie Donnellan

Where do you start with an enthralling Lidl LGFA NFL Division 4 Semi-Final? The controversy, the never say battling spirit, the superb football between two evenly matched sides? But at the end of Sunday’s extra-time classic, Leitrim’s dreams of League glory were dust as Offaly celebrated a famous victory.

The stone cold facts of the scoreline tells one story but it obscures the drama of a game that literally had everything from a blistering Leitrim start to long periods of Offaly dominance through to the drama of Leitrim forcing extra-time and the trauma of a serious knee injury for Ballinamore’s Emma McGovern.

Truth be told, and every Leitrim supporter I talked to after the game echoed this point, the best team on the day won and that was Offaly. They recovered from two blitzkrieg starts to both halves from Leitrim and were leading when Michelle Guckian scored over five minutes into added time to force extra-time.

The controversy is easy to pinpoint and centres mostly on the decision of referee Mel Kenny to throw the ball up after it appeared to all and sundry that Leitrim sub Sarah Reynolds was clattered into by an Offaly defender as they went for the ball following keeper Eimear Evans's point blank save from a Michelle Guckian shot.

To the incredulity of the Leitrim supporters, the referee, after a long consultation with his umpires, proceeded to throw-up the ball and Leitrim’s chance to kill off the Offaly challenge was lost.

The importance of that incident can’t be overstated as Laura O’Dowd had just lashed home her second goal of the day to cut Offaly’s four point lead back to a point. From the kickout, Leitrim won possession only for Michelle Guckian to see her point blank save brilliantly saved by the Offaly keeper.

That wasn’t the only controversy, however, with Offaly incensed that over the timing of the added time. The match countdown clock on the scoreboard had expired by more than 90 seconds when Guckian scored to bring the game to extra-time after the midlanders had wasted two great chances to seal their victory, Leitrim keeper Niamh Ryan making a vital save.

In extra-time, Offaly’s game management saw them take their chances as Leitrim saw shots blocked and hit the post while the traumatic knee injury suffered by Emma McGovern, which saw the game halted for at least 15 minutes, certainly didn’t help the Leitrim players when play eventually resumed. 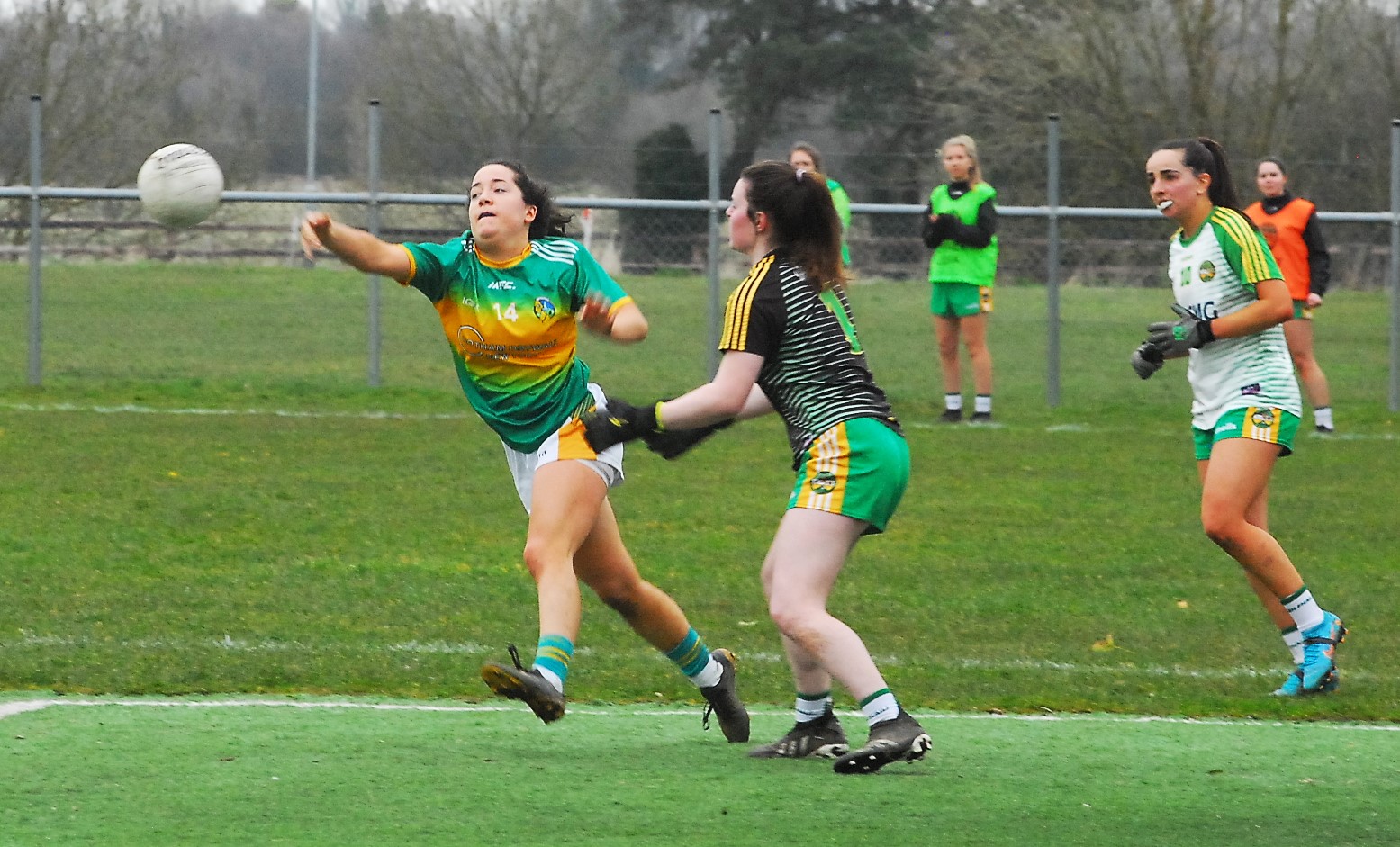 Yet for all that there was no doubt that Offaly were the better team - they recovered from a blistering Leitrim start that saw the Green & Gold score 1-2 in the first four minutes to reel off nine unanswered points only for a lucky bounce of a ball coming off the crossbar to lead to a Laura O’Dowd goal on the stroke of halftime.

Leitrim again started like a train in the second half with six unanswered points in the first ten minutes of the second half but two Offaly goals saw them go four points clear once again.

Hugh Donnelly’s side were just not able to shake off an Offaly team who tackled with tigerish intensity and played the ball with an assurance and skill that left the Leitrim defence run ragged for long periods.

The loss is a huge blow to Leitrim who were determined to avenge the pain of last year’s Division 4 Final loss to Louth by lifting the title this year. Unfortunately, Offaly proved that bit more adept at managing the fine margins and they thoroughly deserved their place in the final.

It didn’t look that way when, after points for Laura O’Dowd and Michelle Guckian (free), Niamh Tighe played a one-two with Leah Fox before burying the ball in the Offaly net. That left Leitrim 1-12 to no score ahead but they were signs of worry even at that stage as Offaly manufactured two goal chances, hitting the post and claiming for a penalty as well.

The impressive Ellee McEvoy opened Offaly’s account on eight minutes and would add four more scores along with points from Ciara Walsh, Emma Hand, Fiona Dempsey and Walsh again as Offaly went on an unanswered nine point run to take a four point lead with five minutes left in the half.

Leitrim were struggling but were still threatening, Leah Fox twice denied goals by Evans' saves in the Offaly goal but a goal did come, albeit with a large slice of good fortune when Michelle Guckian’s high shot rebounded off the crossbar, leaving Laura O’Dowd with a close range finish to leave the scores at 0-9 to 2-2 at halftime in favour of Offaly.

Just as they did in the first half, Leitrim came out all guns firing in the second half with Michelle Guckian firing over three points inside the first 90 seconds, all from play. Emma Hand saw an Offaly free fall short and when Laura O’Dowd broke at speed, it led to a fine point for sub Sarah Reynolds.

Guckian added two points as Leitrim transformed a one point deficit into a five point lead inside ten minutes. Offaly reacted by bringing on Offaly camogie star Mairead Daly for her first start of the season and she made an enormous impact as Offaly immediately fired over points from Marie Byrne and Amy Gavin Mangan.

Then Daly burst through and her pass found Emma Hand who buried the ball in the Leitrim net on 13 minutes. Two minutes later, Daly found Ciara Walsh suddenly Offaly were a goal to the good. McEvoy added a good point as Offaly were now in control.

But Leitrim weren’t finished - subs Roisin McHugh and Sarah Reynolds combined to free Laura O’Dowd who buried the ball in the net on 18 minutes. From the kickout, Leitrim won the ball back and fed Michelle Guckian whose shot was brilliantly saved by the Offaly keeper.

Sarah Reynolds jumped for the dropping rebound and appeared to be clattered into by the Offaly defender only for a throw-ball to be awarded. Leitrim did draw level with seven minutes left when good work from Siomha Quinn and Fox led to another Guckian point. 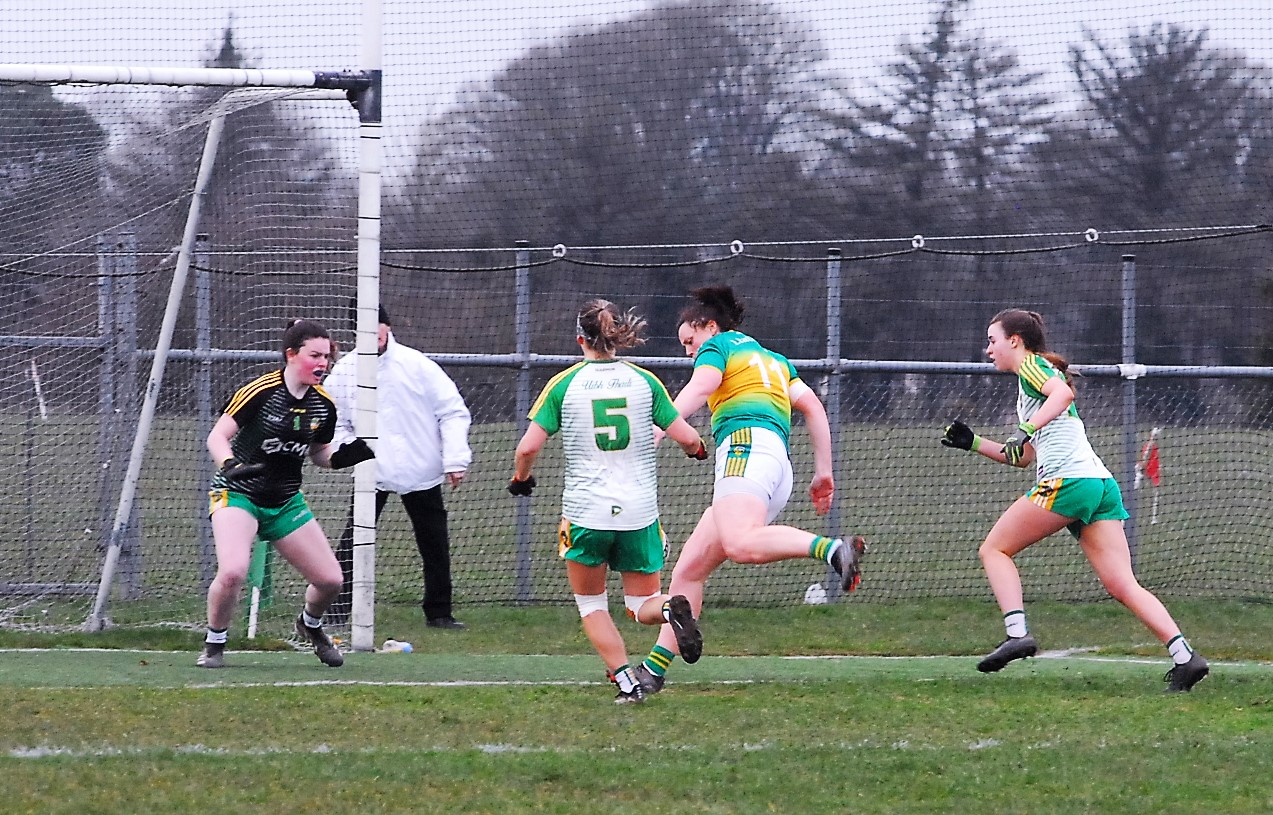 Michelle Guckian fires a shot at the Offaly goal which was saved by keeper Eimear Evans Picture: Willie Donnellan

Offaly regained the lead as the game went into added time thanks to a McEvoy point while Niamh Ryan made a huge stop from a Eve Kelly shot after a poor kickout was intercepted. With the clock showing well over five minutes play and the match clock expired for about 90 seconds, Leitrim rescued a draw after McEvoy left a free short and Leitrim broke, setting up Guckian for the equaliser.

Offaly started the best in added time with points from Daly & McEvoy in the first minute. Leitrim had chances with Roisin McHugh shooting wide while defender Becky Bryant made a vital block on a Guckian shot at the expense of a fifty.

Offaly led by two points at the end of the first half of extra-time but less than half a minute into the second period, Leitrim suffered a huge blow when sub Emma McGovern seriously injured her knee, an ambulance needed to take the Ballinamore player off the field after a lengthy stoppage.

When the game resumed, Michelle Guckian’s free hit the post and rebounded wide and with both teams struggling after an intensive encounter, there was just one more score with Saoradh Doyle converting a free to seal Offaly’s victory.