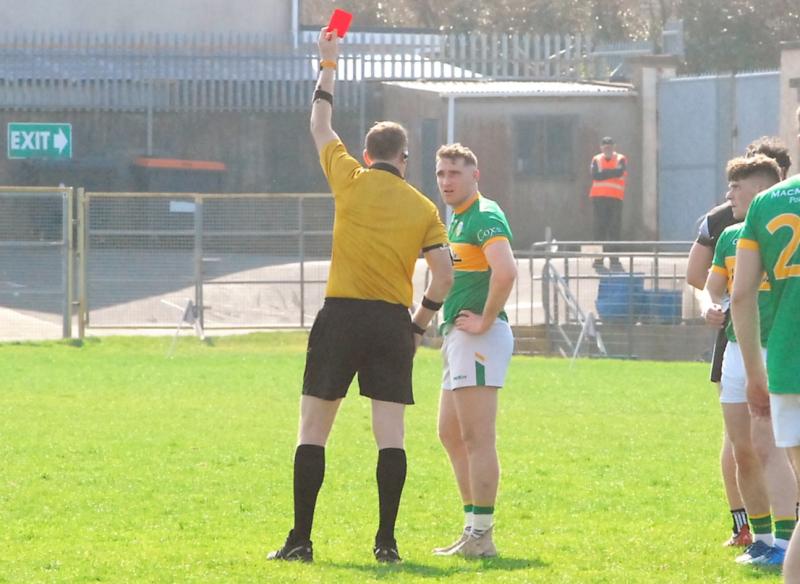 For a match that was meaningless in the Allianz NFL Division 4 promotion race, both Leitrim and Sligo were left counting the cost of their clash in Markievicz Park on Sunday with red cards for Leitrim top scorer Keith Beirne and Sligo freetaker Sean Carrabine potentially ruling them out of their first round Connacht Championships clashes on Easter Sunday.

In the battle for local honours, a rip roaring first half saw both teams score two goals apiece in the first 13 minutes before the Yeatsmen exerted their recent dominance by pulling away in the second half for a convincing six point victory.

But it was the straight red cards issued by Laois referee Seamus Mulhare for Keith Beirne and Sean Carrabine that Leitrim and Sligo will find the most costly with both potentially ruled out of their counties' opening games against London and New York in the Connacht Senior Championship on Easter Sunday.

Beirne's red card after just 25 minutes left spectators mystified with the action was halted for a Sligo free in front of the Leitrim posts. Beirne walked out to meet the Laois official some 60 yards from the Sligo goal and looked shocked when the referee produced the red card.

It appears that the referee was informed by one of his officials that the Leitrim sharpshooter had struck a Sligo player off the ball and Beirne got his marching orders.

Carrabine's red card was equally controversial - the Sligo man did catch Domhnaill Flynn with a heavy arm across the chest with the Yeats man shocked when Mulhare showed the red card.

Unless both counties can mount a successful appeal, it means that Leitrim and Sligo will face London and New York respectively without two of their key players.

The two cards detract from a game that lacked the physical challenges you'd normally expect of these neighbours. But the game was played at a breathless pace, particularly in the first half, before Sligo seized control of the contest in the second half to claim third place in the table with Leitrim a place behind them in fourth.

Sligo's forwards were able to continually punch holes in Leitrim's rearguard as they outscored Andy Moran's side by 10 points to five in the second half, Leitrim conceding all but six scores from play.

Leitrim opened the scoring with a quick fire point from Ryan O'Rourke, collecting a free and turning sharply to score after just 18 seconds. But barely had the clock ticked past 60 seconds and Sligo had the ball in the net. Great work from the impressive Keelan Cawley saw him break free about 40 yards and charge forwards before off-loading the ball to Patrick O'Connor who sidestepped a defender to slam the ball to the Leitrim net.

It was a blistering start that saw Conan Marren hit a wide before Riordan O'Rourke has the sort of wide that he will have nightmares about, charging forward with only the keeper to beat but he cut the ball back too much, the ball incredibly sliding wide with the goal at his mercy.

Keith Beirne opened his account from long range but Sligo sliced open the Leitrim defence, Cawley again doing the damage as he gathered a pass from the rampaging Paul Kilcoyne and then played the ball across to O'Connor who, once again, sidestepped a defender to blast the ball to the Leitrim net from close range - the game was barely seven minutes old at this stage.

Sean Carrabine put over a free but the scores continued to flow at an incredible rate with Riordan O'Rourke making up for his miss with a strong run and then a clever floated pass from the leaping Jack Heslin to fist to the Sligo net, leaving the scores at 2-1 to 1-2 in favour of Sligo after just nine minutes.

Paddy Maguire from close range and Ryan O'Rourke from a mark shot wide but those were all forgotten when Leitrim pounced on a Sligo kickout and fed the ball into an unmarked Keith Beirne. The Mohill man advanced and struck a low shot you felt that the Sligo keeper should have got to - fortunately for Leitrim, Eamonn Kilgannon's hand wasn't enough to stop the shot from ending up in the net - 13 minutes gone!

A long ball to Conor Cullen saw the Aughnasheelin man find Ryan O'Rourke who cut inside two defenders to fire over the bar. Keelan Cawley swapped points with Beirne (free) before Carrabine broke through a couple of tackles to leave a point between the teams on 19 minutes.

Sligo almost had a third goal when a fisted effort from Alan Reilly was cleared off the line by Conor Reynolds but Conan Marren tied the scores with a well worked point before the game took a massive twist when Keith Beirne was red carded. The action was up at the dressing room end where Alan Reilly's mark was whistled for taking too long just as he kicked the ball over the bar.

From the resulting throw-up, Sligo won possession and a free, converted by Carrabine but in between the disallowed mark and the free, Beirne got his marching orders. Mark Diffley followed him into the referee's card with a yellow while David Bruen and Riordan O'Rourke both collected yellows, the Fenagh man perhaps fortunate in light of what happened to Carrabine in the second half.

Jack Heslin did score a fabulous point from distance after a run down the right wing but Sligo went into the break with a one point lead after Brian Egan fired over a fifty, leaving the home side 2-6 to 2-5 ahead at the break.

Both teams made changes at the break - Brendan Flynn replacing Darren Maxwell in goal while Nathan Rooney, son of Leitrim 1994 legend Aidan, also came on. Sean Carrabine opened the scoring from a free before he got sent off, somewhat harshly, for a challenge on Domhnaill Flynn after three minutes, leaving both teams at 14 men for the rest of the game.

First the young Aughnasheelin player scored a great point under pressure to cut Sligo's lead back to two but from the next kickout, he got caught behind his man and pulled him to the ground, earning a black card. Nathan Rooney hit a bad wide for Sligo and Leitrim seemed to be taking advantage as a long ball to Donal Wrynn was eventually worked back for sub Emlyn Mulligan to fire over on 15 minutes.

Rooney replied for Sligo with a good point but then the woodwork came into play - Mulligan saw a free hit the post and fall wide while an O'Connor free hit the post and Alan Reilly was able to win the ball back to fire over. Mulligan pulled back another free on 20 minutes but two quick fire points from sub Conor Griffin and Reilly (free) put the home side four clear.

Leitrim full-back Donal Casey surged up the field in support of the charging Paddy Maguire leading to a good score for the young Leitrim Gaels player on 61 minutes and after Reilly put a free wide, another sub Shane Moran looked as if he was going to really put the pressure on when he fired over a good point with less than five minutes left to play. 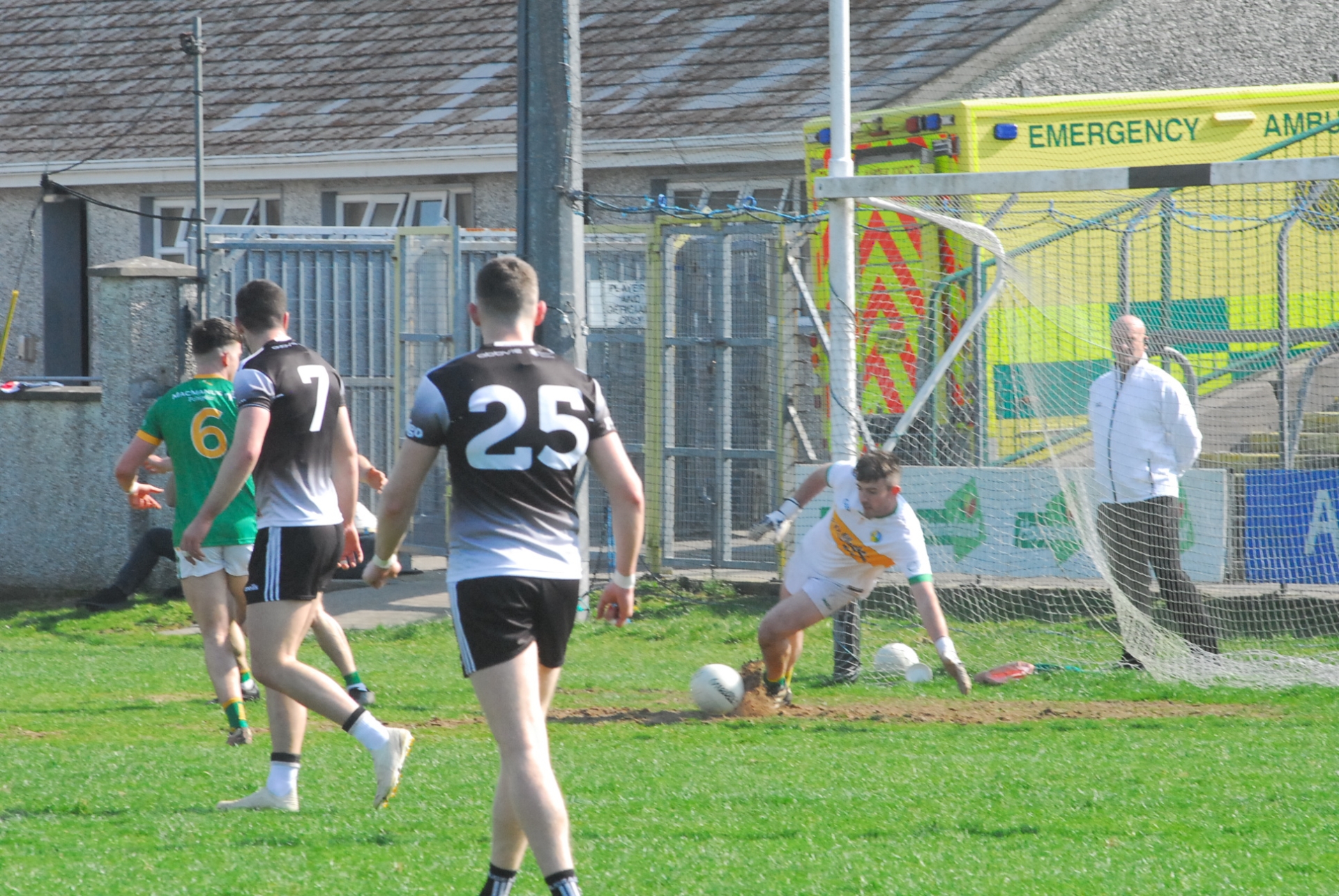 Sligo's response was deadly and impressive - Griffin opted to fist the ball over the bar when he was put through on goal by O'Connor before Nathan Rooney finished off a good counter-attack with a fine point. Sligo then pounced on a poor Leitrim kickout and Rooney fired over to open a five point gap.

Leitrim had one glorious chance to get back in the game when Emlyn Mulligan's long free was broken by a leaping Donal Wrynn in the Sligo goalmouth. The ball fell to Evan Sweeney just a few yards from goal but Sligo keeper Eamonn Kilgannon made a superb save to deny the Glencar Manorhamilton player.

Sligo saw a shot hit the woodwork and Rooney had a shot blocked but they had the last work when David Quinn held off Paddy Maguire and fired over an excellent point to seal a six point victory.