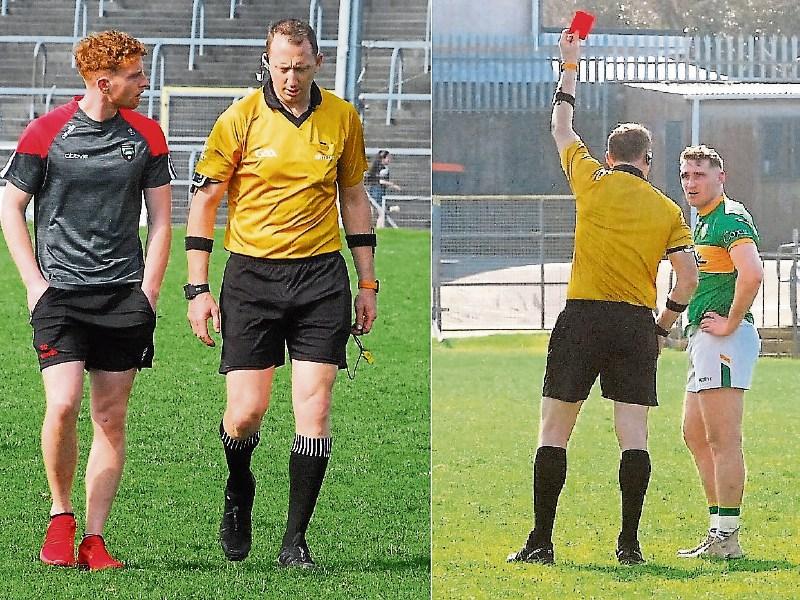 For a game that supposedly meant little in the grand scheme of things, Sunday's final round of the Allianz NFL Division 4 campaign could have serious repercussions for Leitrim and Sligo as they set forth in the championship in a little less than three weeks time.

You'd imagine both Leitrim and Sligo are pouring over whatever videos they can find and examining the report of match referee Seamus Mulhare with a fine tooth-comb ever since Sunday's Markievicz Park showdown as they battle to have Keith Beirne & Sean Carrabine available for their trips to Ruislip and Gaelic Park.

The dismissal of Leitrim's top scorer and the equally influential Sligo midfielder overshadowed the result, the home side easing to a six point victory in a game that was entertaining certainly but played without the usual ferocity of clashes between these great rivals.

We won't go over old ground here but suffice to say, once results went the way they did on Saturday, Sunday's game was robbed of all significance, other than the local bragging rights which the Yeatsmen claimed for the third match in succession.

That is what we should be talking about, not red cards, as the Sligo men, a younger outfit than Andy Moran's crew, are starting to build momentum, all the more impressive considering Tony McEntee's side were without the superb Niall Murphy.

Same could be said for Andy Moran's team - few gave Leitrim any hope last July of mounting any sort of challenge for promotion in the wake of the Mac Hale Park slaughter but a rejuvenated Green & Gold gave it an almighty go and brought back the excitement and enthusiasm on the terraces.

Many fans are already thinking about next year's League and as much as there are genuine reasons for optimism, there are pitfalls too.

London will be better next year having had no game in virtually two years before this year's campaign and Leitrim must travel to Ruislip in next year's campaign. Carlow and Wexford will both be stronger while we don't know what we can expect from Wicklow or Laois - and Sligo are still in the mix.

Nothing easy there but the progress Leitrim have made is undeniable. They are organised, superbly conditioned and well drilled and scoring for fun so a lot of the groundwork had been done. There are concerns about the defensive frailties and for a team backboned by the U21 and Minor teams of 2014, time is marching on.

But that is long term - the focus turns very quickly to Ruislip and a challenge that doesn't look any easier the closer it gets. It is why Keith Beirne's possible ban for the London match caused so much consternation among the Leitrim supporters who made the journey to Markievicz Park.

That journey was hard enough with the huge crowds attending the Mayo and Kildare game in Avant Money Pairc Sean Mac Diarmada causing many fans to miss the start of the game and their mood was not helped when the referee flashed the red card at the Mohill man.

The look of disbelief on Beirne's face was mirrored by almost everyone in Markievicz, prompting endless questions of “Did you see what happen?” Beirne himself walked out to meet Mulhare, prompted to by members of his officiating team, when the match official was marching down the field and I think he was genuinely expecting a yellow card at worst.

Truth be told, like almost everyone else, I didn't see what happened with the action at the far end of the field but from what I could find out, a linesman or umpire spotted Beirne allegedly striking a Sligo player. What happened before or after the incident, I genuinely have no clue!

Winning an appeal in those circumstances won't be easy, Leitrim will need pretty good video evidence but Sligo officials immediately offered their footage from behind the goals to Leitrim in the event of an appeal.

I'd also hope that Sean Carrabine is successful in his appeal - I did witness that incident and I've got to say his red was very, very harsh. A yellow would have sufficed but the referee, on the other side of the challenge, thought it was warranted the straight red but nearly every Leitrim fan I met felt it wasn't a red.

In that strange universe that is the GAA Disciplinary world, the feeling is that Carrabine might have a better chance than Beirne of having his card rescinded purely thanks to the fact that the incident took place on camera as it were.

It is the sort of headache that Andy Moran and Tony McEntee could do without as they prepare for the championship but in a strange way, the whole farrago might take some of the heat off Leitrim. Certainly it will focus Leitrim minds even more and maybe that is no bad thing but honestly, I'd much rather have Beirne on the field in McGovern Emerald Park on Easter Sunday!