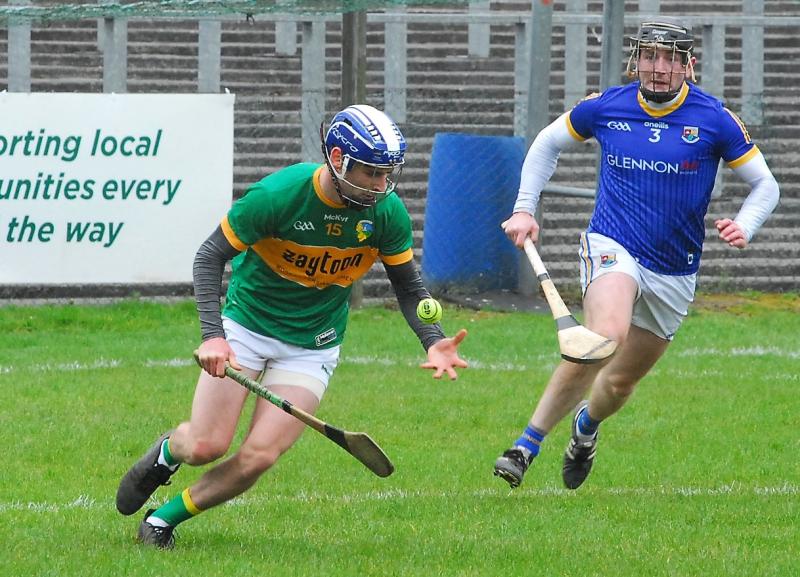 Third time lucky or leaving it late, whatever cliche you use, there is no denying the importance of Leitrim’s last gasp victory over Longford in the first round of the Lory Meagher Cup on Sunday in Avant Money Pairc Sean Mac Diarmada.

After a chastening ten point loss at the hands of their neighbours just two weeks ago, Olcan Conway’s troops looked as if they were destined for a third loss in four weeks at the hands of Longford as they led by two points with the game deep into the three allocated minutes of added time.

But a defiant Leitrim never stopped trying and when Diarmuid Kelleher burst through the last line of defence, it took two Longford defenders pulling him back to deny him the opportunity of a match winning goal. Fortunately for the Green & Gold, referee Brian Keon swung his arm wide to signal a penalty and Joe Murray drove to the net to give Leitrim the victory that might just kick start their season.

Incredibly, Leitrim won another penalty with their very next possession but Murray’s effort this time struck the post but it did no damage as the final whistle sounded seconds later, leaving Longford bemused as to what just happened and Leitrim over the moon.

Longford may well wonder just how they lost this one, scoring 20 points but you can’t fault the never say die spirit of the Leitrim lads who refused to lie down against a team who had already beaten them twice in the league. Leitrim also had more wides as they didn't make best use of the opportunities they created but their ability to find the net was the difference in the end. 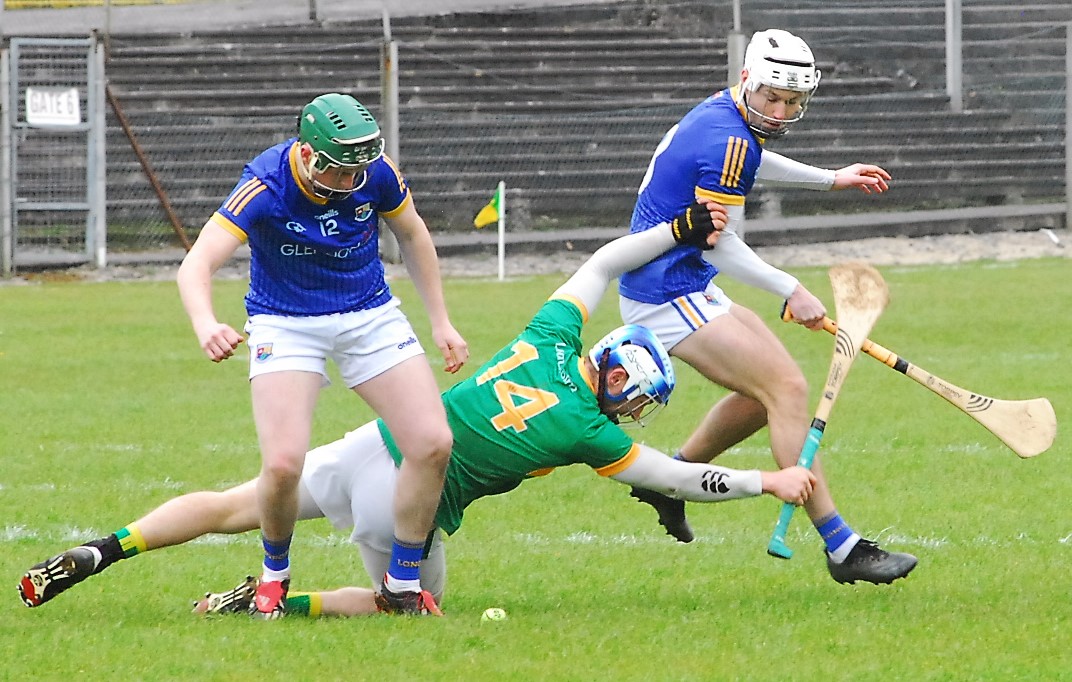 In fact, most of Leitrim’s problems were of their own making with most of Longford’s scores coming from placed balls, Joe O’Brien hitting on the day but with James McNabola, Brendan Delaney, Karl McDermott and Murray finding the net, they couldn’t hold out against an irrepressible Leitrim.

Much of Leitrim’s improvement came in defence - the return of David McGovern was offset by the loss of full-back Stephen Goldrick but in a masterful switch, Martin Feeney took up duty on the edge of the square and never gave the dangerous Cathal Mullane a goal chance.

Sweeper Cathal O’Donovan made a big impact, protecting his defence against a Longford side who displayed the better stickwork but couldn’t hold off the determined Leitrim men.

Cian Kavanagh got the game’s opening score for Longford after just ten seconds but Leitrim gave an indication of what was to come, Joe Murray penalising a foul on Aaron McDermott from a free before James McNabola dispossessed a defender on three minutes, rounded his man and unleashed a brilliant low shot to the corner of the net.

Longford came back with two points from Cathal Mullane, either side of another Murray free but Longford should have taken the lead when Emmet Corrigan did all the hard work, slamoning his way through the Leitrim defence but with only keeper Clement Cunniffe to beat, he drove his shot wide across the goal.

Murray pulled back a free but Leitrim were missing some good chances, Murray scooping a goal chance while McNabola’s poor executed pass to Aaron McDermott as he bore down was a huge let off for the visitors.

Gavin O’Hagan did strike from the halfway line for a good point but with Brendan Delaney, Senan Keane and Karl McDermott all hitting wides, Longford took advantage with an O’Brien free and a Johnny Casey point.

Longford then got on a run of scores with three O’Brien frees before halftime and a John Mulhern score after a good run with only a James McNabola point, albeit a great catch from a Delaney pass, in reply as Longford led 0-9 to 1-5 at the break. 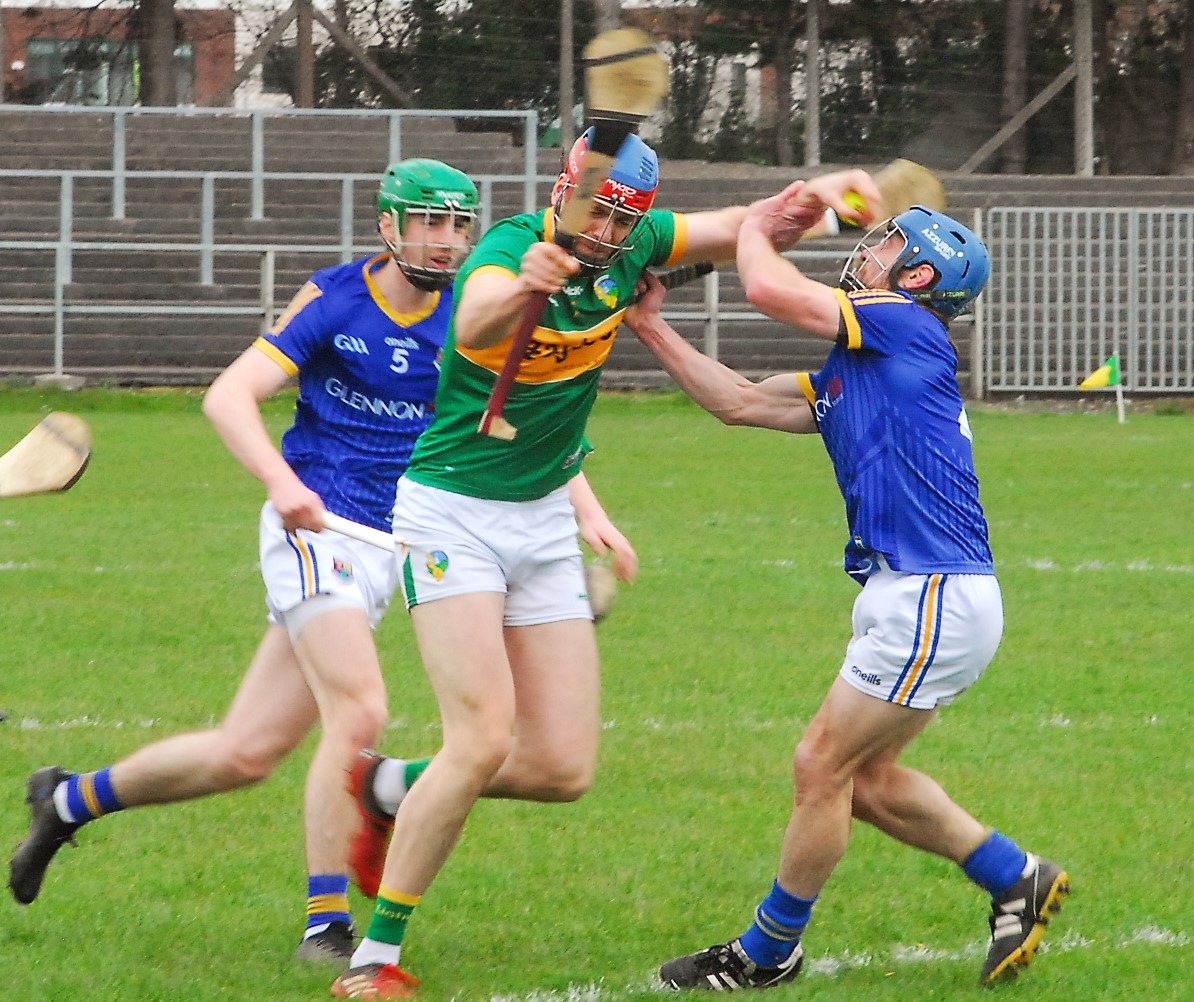 Longford seemed to be taking control early in the second half with points from Kavanagh and centre-back David Buckley but the game was thrown wide open against when sub Diarmuid Kelleher, on just before halftime for the injured Aaron McDermott, broke free from the 50 yard line.

He charged forward and under great pressure, he managed to flick the ball to Karl McDermott and the Manorhamilton man made no mistake with a brilliant finish to the Longford net.

Joe Murray collected a sideline cut to turn and score and from Karl McDermott’s long range free, James McNabola made a fabulous catch to turn and score on ten minutes, leaving Leitrim two points to go the good.

Again Longford responded, three O’Brien frees edging them in front midway through the second half but a fortunate free for overcarrying saw Gavin O’Hagan shoot over to tie the scores once more.

Both sides were missing chances, Clement Cunniffe making a vital save from Reuben Murray but the Longford man did edge his team back in front as Leitrim failed to clear the sliothar with 12 minutes of normal time left.

But then came a moment of pure magic - from the puckout, Joe Murray rose impossibly high out on the wing underneath the main stand, making a fantastic catch before driving a first time ball in towards the Longford goal. Brendan Delaney grabbed the ball first-time and turned to bury the sliothar in the Longford net.

Again Longford came back although they were relying heavily on placed balls for scores and two O’Brien frees had them level once more with just over five minutes to go. Leitrim responded positively with Joe Murray showing great persistence to win dirty ball, hold off his man before firing over.

The action was getting frantic but Longford’s sharper skills saw them work some good opportunities, sub Paul Barden firing over the bar with virtually his first touch of the sliothar with less than three minutes to go. Another O’Brien free gave Longford the lead a minute later before a well worked score for Adam Quinn put them two clear.

However, Leitrim were not finished and as the three minutes of injury time were nearly up, Diarmuid Kelleher broke the Longford line, he charged towards goal only to be pulled back inside the area. A black card for Aidan Sheridan followed before Joe Murray held his nerve to drive the sliothar to the net.

Incredibly, Leitrim won another penalty as they turned over the puckout and Joe Murray was heading through only to be hauled down, Longford’s Keelan Cox earning a black card and conceding a penalty for denying a goalscoring opportunity.

Unfortunately for Murray, his well struck shot cannoned off the post but thankfully the final whistle sounded to prompt Leitrim celebrations.