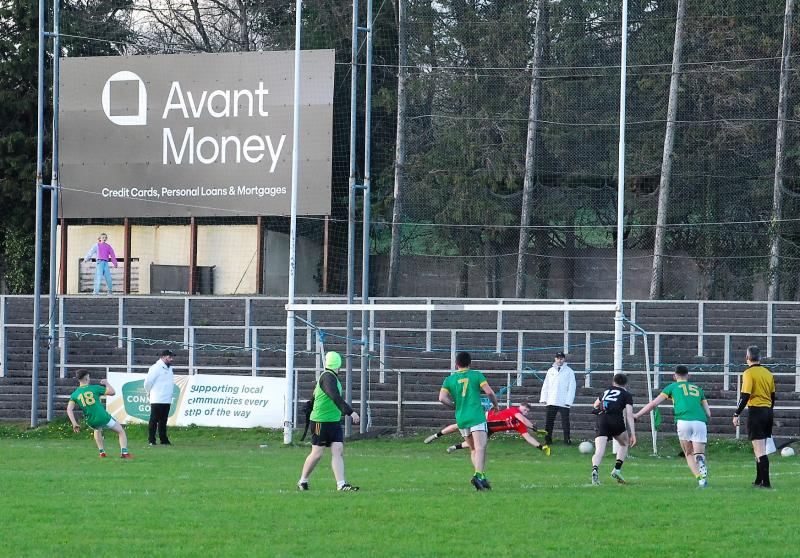 Jack Casey converts a penalty in the 64th minute to leave a point between the sides Picture: Willie Donnellan

Hard to know what to make of Wednesday's EirGrid Connacht U20 Championship Semi-Final as a dominant Mayo were left thanking their good fortune the final whistle sounded to end a furious Leitrim fightback that yielded 2-2 over the last nine minutes of action in Avant Money Pairc Sean Mac Diarmada.

Jack Casey's successful penalty, awarded after the allocated three minutes of added time had elapsed, came too late to give Leitrim the chance of an unlikely equaliser as Brendan Guckian's team, held to just four points in the opening 50 minutes of the game, finished with 2-4 to almost catch out the favourites.

Leitrim fans were calling for more time from referee Ronan Hynes but with the awarding of the spot kick coming in added time of added time, the long whistle ended Green & Gold hopes of sending the game to extra-time.

For Mayo there was relief that their complacency in the final quarter didn't prove too costly but for Leitrim, pride was mixed with deep frustration that a team that could produce such an epic finishing effort was unable to mount a stronger challenge for longer in the game.

It was a dilemma for manager Brendan Guckian - go more attacking and there was the danger of Mayo cutting them to pieces and it took a superb finer-tip save from keeper Conor Flood to deny Mayo a goal early in the second half from a deflected shot. That save kept Leitrim in the game but few, even the most rabid Leitrim fan, saw the comeback that the home side produced in the closing stages. 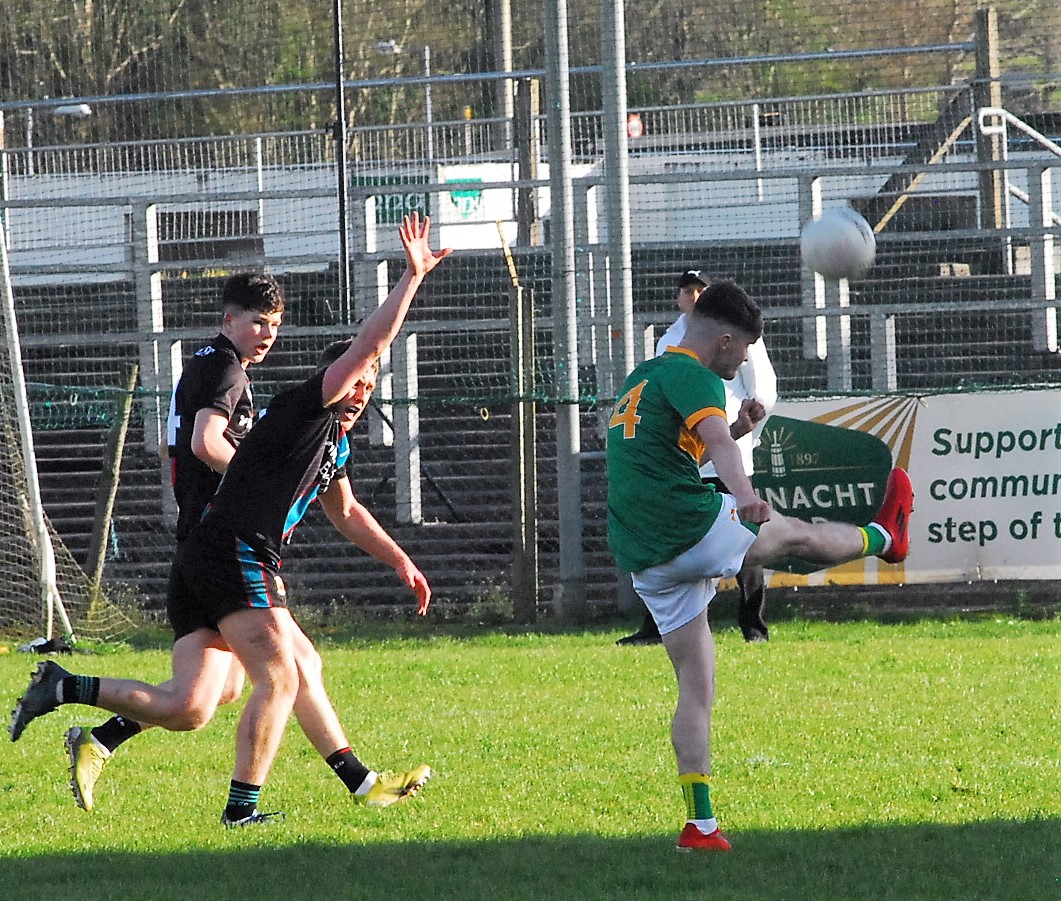 Mayo led by 11 points midway through the second half and truth be told, they were good value for their lead as they dominated most sectors and kept a steady flow of points, taking advantage of a black card for Leitrim's Jamie McGreal early into the second half to score an unanswered seven points.

Eight of Mayo's scores came from placed balls as Leitrim's defensive system stopped the visitors, featuring three Mayo Senior panelists, from opening them up but did concede scoring opportunities from placed balls and there was no doubting that Mayo were the superior team for the vast majority of the contest.

Mayo were quickly out of the traps as Irwin put over a free just 50 seconds into the contest before Cian McHale fired over another placed ball from 40 yards after an Eoin McLoughlin foul. And when Leitrim lost the ball in attack, a quick counter-attack led to Tom O'Flaherty pointing from about four yards.

Leitrim tried to hit back with a big score but Conor Quinn fisted a long ball narrowly wide while Fergal McLoughlin had a bad miss. Michael McKiernan, Leitrim's best performer on the evening by a distance, opened the scoring as he came at speed onto a pass from Danny McWeeney to cut the ball over the Mayo bar from a tight angle on 11 minutes.

From the kickout, Frank Irwin made a good catch and fed the ball to Cian O'Connell who ran on to score. Midfielder Donnacha McHugh fired over another from play as Mayo worked the ball from one wing to the other. After a Barry McWeeney wide, Fergal McLoughlin scored a lovely Leitrim point from distance.

Again, Mayo hit back instantly, another kick-out being worked to centreback Sam Callinan who burst through to fire over a fine point on 19 minutes. Jamie McGreal was unlucky to put a mark wide and when the ball was turned over, Mayo worked it to Irwin who scored an easy point on the break.

Cian McHale punished another Leitrim foul with a free on 27 minutes but it wasn't all good news for Mayo as McHale was forced out of the action with injury while fortune smiled on Leitrim when Callinan turned over the ball with no defenders between him and goal only for his hamstring to go, the Mayo senior just about lasting until halftime before he was replaced.

Michael McKiernan notched his second point in injury time to leave Mayo with a 0-8 to 0-3 halftime lead, a lead reduced when sub Oisin Curley, on at the break for Danny McWeeney, gathered after a run from Senan Harte to score.

But Leitrim's hopes were dealt a major blow three minutes in when Jamie McGreal was black carded for fouling a Mayo player after a pass, Irwin converting the free. Keeper Conor Flood made two good contributions, clawing a Paddy Heneghan shot from distance from under his crossbar.

Flood did even better a minute later when Fenton Kelly's shot took a wicked deflection off an attempted block but the Allen Gaels keeper scrambled to keep the ball from sneaking in under the crossbar, Cian O'Connell putting the ball wide. And another Mayo goal chance when abegging when Heneghan saw his goal chance blocked out for a fifty that was converted by Frank Irwin. 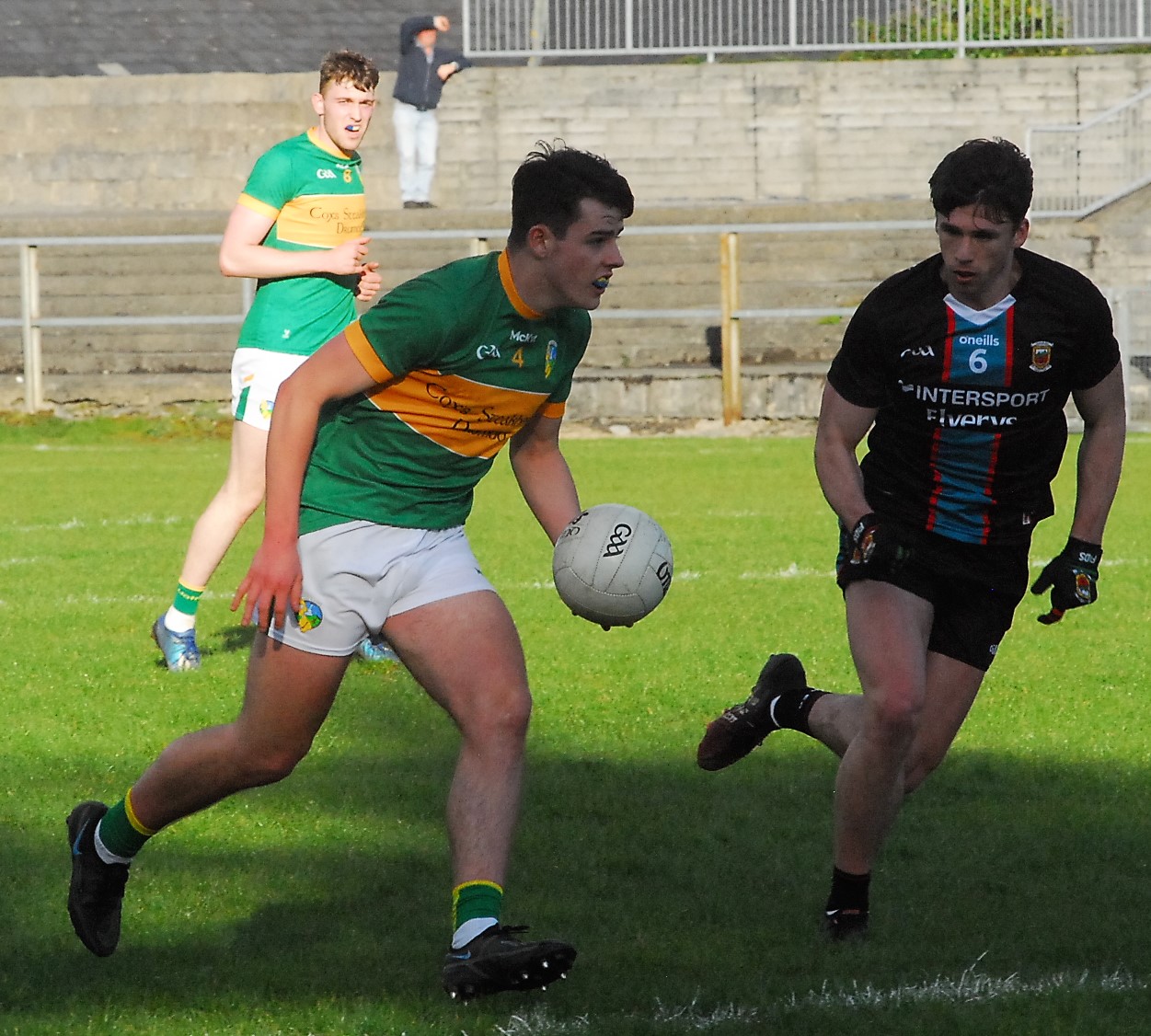 Tom Hughes on the charge for Leitrim Picture: Willie Donnellan

Irwin and O'Connell added points from placed balls before Heneghan and Kelly swept over a point each from play in the space of 60 seconds. Another Irwin point left the gap at 11 points on 46 minutes before Leitrim ended a barren spell with a good point from sub Jack Casey.

Fergal McLoughlin quickly added a point from a free after a foul on the returned McGreal before another sub, Paul Moran, swept over a fine shot from distance to cut the gap back to eight points. From that kick-out, Irwin made a mark and fed the ball to Dylan Thornton who ran through for what turned out to be Mayo's last score of the contest.

Michael McKiernan launched a high ball into the Mayo goalmouth but it was cleared but Leitrim's bombardment paid off with five minutes of normal time left when Conor Quinn rose impossibly high to fist the ball from the height of the crossbar down and into the Mayo net after 55 minutes.

At the time, it looked no more than a consolation score but a long range Michael McKiernan free in the last minute of normal time and a good point from Eoin McLoughlin after Leitrim forced a turnover two minutes later suddenly left four points between the teams.

With Mayo intent on playing keep ball to waste time, it seemed to be working with time well past the allocated three minutes of added time when a foul out the field on McGreal allowed Leitrim send a huge ball into a crowded goalmouth. McGreal got his hands on the ball, lost it only for Cian Singleton to win the ball back and feed it to the Ballinaglera man who was fouled.

Referee Hynes awarded the spot-kick which was brilliantly dispatched but with time well up, the final whistle sounded immediately on the kick-out and Leitrim were left wondering what might have been.