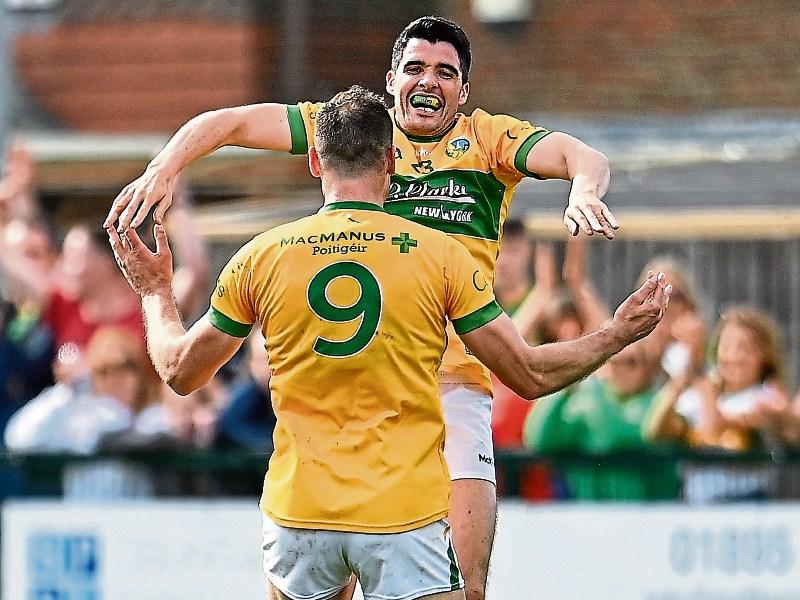 Emlyn Mulligan leaps into the arms of teammate Donal Wrynn after Leitrim's victory over London in the Connacht SFC first round clash in McGovern Emerald Park Picture: Sam Barnes Sportsfile

Leitrim will find out who they will face in this year's Connacht SFC Semi-Final next Sunday when defending champions and All-Ireland finalists Mayo host Galway in Castlebar after Andy Moran's team survived a bitterly close contest against London in McGovern Emerald Park in Ruislip last Sunday.

A late breakaway Ryan O'Rourke goal secured a 3-12 to 2-11 victory over the Exiles who were pushing to secure a late equaliser having trailed by eight points at one stage in the second half, prompting fears among the sizeable Leitrim support that the game would go to extra-time.

Leitrim's attention will now turn to Hastings Insurance Mac Hale Park next Sunday with the heavyweight meeting of Mayo and Galway. Should Mayo prevail, their meeting with former star Andy Moran will take place in Avant Money Pairc Sean Mac Diarmada but a Galway victory would mean a trip for Leitrim fans to Salthill and Pearse Park on Sunday, May 8.

Sligo also endured a torrid time in their championship encounter in Gaelic Park as New York levelled the scores before four late unanswered points secured a 1-16 to 0-15 victory for Tony McEntee's side. No more than London, New York will have quite a few regrets as they hit the woodwork four times in the entertaining encounter in the Bronx.

In other championship news, Leitrim hurlers produced a storming second half to secure a second victory in the Lory Meagher Cup on Sunday while Leitrim Ladies also opened their Connacht LGFA Intermediate campaign with a five point win over Roscommon on Good Friday.