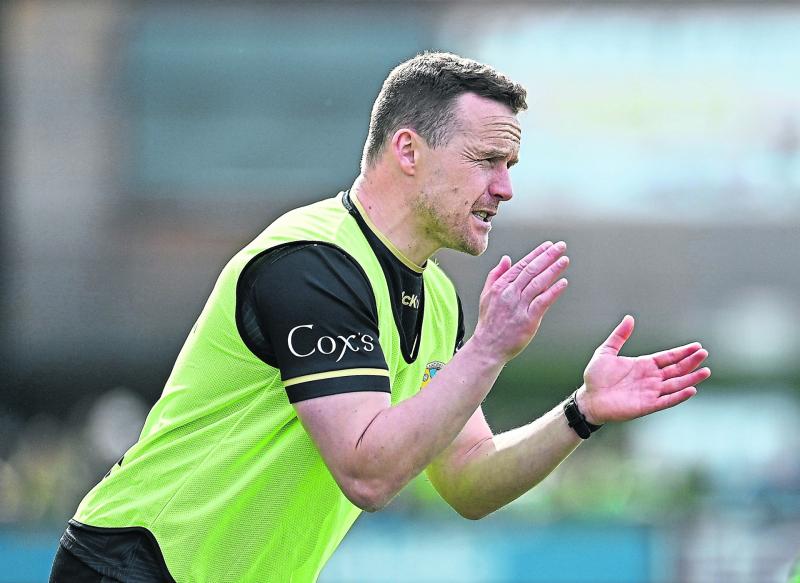 Relief, pride and a few flashbacks were the thoughts flickering through Andy Moran’s mind last Sunday evening as the Leitrim manager looked back on a tense, raucous and tough championship victory over London in McGovern Emerald Park in Ruislip.

Ever the positive thinker, the former Mayo legend’s words sums up his love for the game as he remarked to the press “What an occasion, what a pitch, what a setting. I think for two lowly Division 4 teams we put on a feast of football. It was an amazing game!”

Yet there was also no doubting that a huge pressure had been lifted off the Leitrim manager’s shoulders as he contemplated what was put to him as a free roll of the dice against either Mayo or Galway in the Connacht Semi-Final.

“100 percent - this was the big game. Make no mistake about it - this was a huge game for us as a group. Our guys haven’t won a championship game in a long, long time. We needed to go and win today, and we were just fortunate that we went and did it.”

As tense and exciting as it was on the terraces and in the stands, it must have been pretty tough on the sidelines as London mounted a ferocious fightback in the closing stages to cut the lead down to a point. But under pressure, Moran and his management team produced a tactical masterstroke with the introduction of Emlyn Mulligan.

“I said ‘how many minutes?’ The chairman turned around to me and said ‘six’. We had a brainwave to put Mulligan on for the last six or seven minutes and he controlled the game for us and just got us up the pitch and over the line.”

Moran himself played in a Ruislip championship game that went to extra time in 2011 but the Leitrim manager felt the scenario on Sunday was a very different one to what he experienced with Mayo: “It was a bit different. When we came over in 2011 we were a Division 1 team and we were expected to go and win. Today was a 50-50 game and we were lucky to come out on the right side of it.

“I remember playing that day in 2011 and thinking ‘oh my God’. Our run would have been, we lost to Sligo in 2009, Longford in 2010 and then London, and a lot of our careers would have finished that day. A few flashbacks maybe, but it was slightly different.”

For all the drama, Andy believes that Sunday’s victory is just the start for this Leitrim team: “Today, is the start of a project for Leitrim. Today was up to another level. They say from league to championship is up a level, and the stress and pressure today was huge. It’s lovely just to come out with a win at the end of it.”

Leitrim may not have won promotion in the League but the former footballer of the year believes Division 4 doesn’t get the credit it deserves: “Division 4 is the weirdest division ever, because you’ve Waterford who finished with one point and barely lost by more than three points in any game. They drew with Tipp who got promoted. It’s such a competitive Division.

“You’re playing against a team who are of a similar level and the fitness levels are way up, both from London and Leitrim and it would be nice to see us go and play Mayo and Galway, and show that we’ve improved from last year.”

Looking back on the game, Andy was delighted with the composure his players displayed: “We had a young guy there who played right half back and Mulligan was across the far end of the field and you’re a point up on your six-yard box and he hit a 30-yarder on the outside of the foot into the hands of Mulligan and we go up the pitch and get a goal out of it.

“In these moments you’re looking for the players who really dig in and really do the right stuff, and today we had them.”

The Leitrim manager also felt that his players may have relaxed a bit after Donal Wrynn’s goal put them eight points clear: “A few silly decisions. If you compare it to soccer and why you’re a team playing in Division 2, 3 or 4, the reason for that is the consistency of doing the right thing all the time isn’t there.

“We stopped closing down the kicks, we knew James Gallagher was going to come in and I think there was maybe a tiny bit too much fear with James. We know he’s an exceptional player and he provided something – he pushed us back the pitch. We didn’t stop the kicks coming in.

“It’s about doing the right thing consistently over a period of time. That third quarter for us was amazing for us, but the fourth quarter wasn’t, but we got there.”

However, he did contemplate the strange twist of fate that had him standing on the Leitrim sideline last Sunday in Ruislip having met James Glancy last year in Mac Hale Park last July: “Little did we know that six months later we’d be standing on the sideline in London managing Leitrim. That wasn’t the plan at the time.”