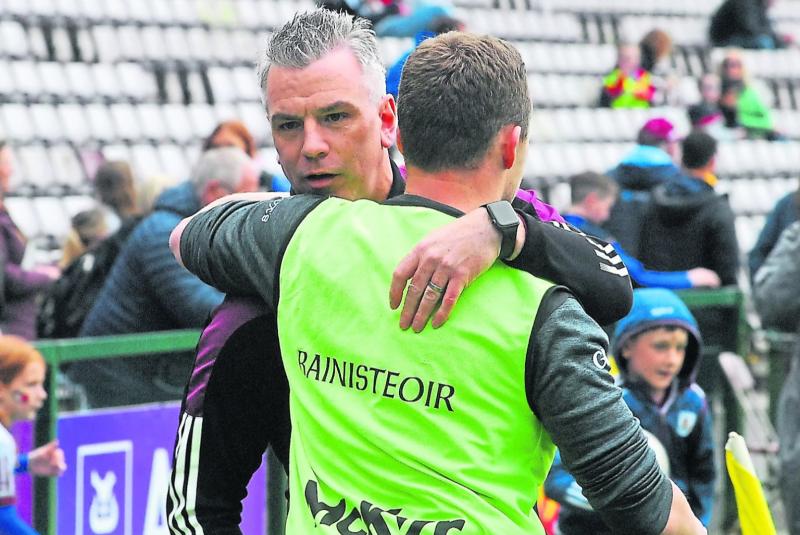 Roscommon weren't even playing last Sunday but there was no doubt from Padraic Joyce's demeanour after Galway's record breaking win over Leitrim that Anthony Cunningham's team was very much on his mind!

“It's a huge ask for us and we're under no illusions it's going to be a tough game,” said the Galway great of the challenge of facing Roscommon the Connacht Final, adding “In fairness to Anthony Cunningham, he has got Roscommon playing a different brand of football this year. They're very economical up front, they've got really good forwards.

“They have six scoring forwards which is unusual nowadays to come across that on county teams. We know well we've a huge challenge to face. We've a home game, if we can get good Galway support there will be a great atmosphere and a great occasion in three weeks' time. It would be great to go and win it.”

Neither does the former two time All-Ireland winner believe that Galway 'owe” something against Roscommon after suffering two losses to Anthony Cunningham's men this year alone: “I don't know whether you owe. We won the two games last year, they have won the two games this year so far. We know well it is going to be tough. All we can do for ourselves in the next three weeks is that we make sure we get ourselves right, that we are ready for action no matter what they do.”

There definitely was the impression that Galway, despite the ease with which they pushed Leitrim aside, had their focus on the Rossies last Sunday: “That's what semi-finals are all about - winning to get to the final - and we did that today.

“Aspects of the game that we'll have to improve on, but overall to kick 4-20 was great scoring and we kept going to the bitter end was great and didn't take the foot off the gas. We got our fourth goal in the last minute of injury-time which was great. Overall, very, very pleased.”

Even the fact that Galway plundered a fourth goal deep into injury time against an already beaten Leitrim pleased the Tribe boss: “As I always say 'The next play is always the most important play'. We're always saying that to the team. They easily could've sat back there and started messing with the ball, but they didn't. They kept driving on and driving on.

“Overall, pleasing. The whole objective today was to get a ticket to the Connacht final which we've got. That's all we can do, we still have nothing won. We face a huge battle in three weeks' time back here.”

In fact, Joyce believes that Galway still have room for improvement despite their battering of Andy Moran's side: “I still think there is a lot of room for improvement in the team. All year long in Division 2 you have to beat what is in front of you. They are pressure games, people might say they are not. I told our lads here two weeks ago that they did really well to quality from Division 2 when you see the standard that was in it.

“!I told them Derry would prove that in a couple of weeks' time - which they did last week. So, we are under no illusions that every game we play we are under pressure all of the time to get a result which is great for the players. Again today to win that game, to get a performance too.”

Analysing Sunday's contest, Joyce was delighted with the impact his bench made: “It is great, they will be looking to start the next day if they got four goals. It is great. In fairness we are conscious of our bench, trying to get game time into them. You can say there is a lot of inexperience on the bench in regards caps or debuts.

“Paddy Kelly came in today and got two goals, he is a great young talent and did really well. Owen Gallagher took the last goal really well. It is great, we are delighted with the way it is going. Niall Daly took his goal - a good player, it is a great headache to have.”

The Galway manager was also happy with his team's defensive form: “We put huge work into it before the league final as well, but it didn't come off in the league final believe it or not. The goal Roscommon got in the league final was a carbon copy of what we conceded in the Connacht final last year. We have worked on it, we have put a lot of work into the defensive side. Again, it is pleasing when we kept them down to single figure scores.”

It means that Joyce and his management team have a few selection headaches ahead of the final: “It took us two hours this week to pick this team. It's a brilliant headache to have. We're lucky on the injury front. That's what lads should be doing, is pushing each other. It's credit to the players, they're pushing each other on all the time.

“It's just brilliant for us as management to see lads sharp in training. Training this week has been really, really good. Look, we'll get over this game and we'll keep the heads down and get ready for three weeks' time.”