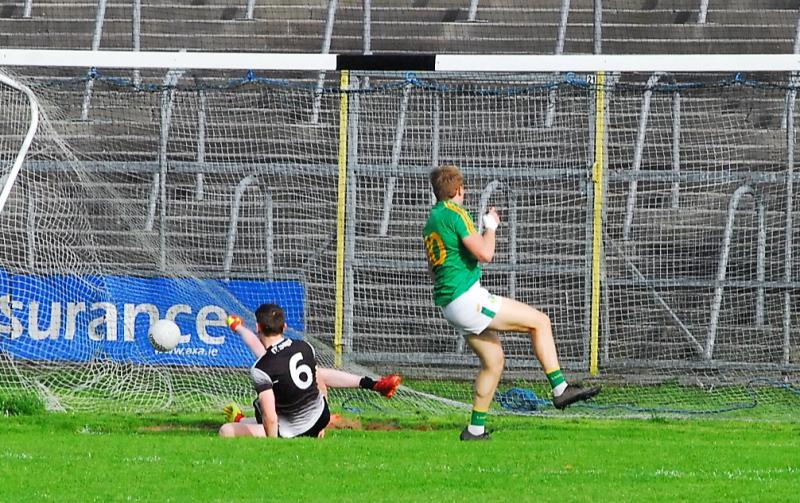 Many will think this writer mad when they look at the final scoreline if I said this was a close, exciting and high quality battle but it was as a fierce scoring burst from Sligo eventually ended Leitrim’s hopes in Friday’s Electric Ireland Connacht MFC clash in Markievicz Park.

Forty minutes into a highly entertaining contest that featured much of what we love about gaelic football, Leitrim trailed the home side by just two points and not many would have put any money on how this game was going to turn out as two fiercely committed and energetic teams traded blow and blow.

Hard to believe then that ten minutes later, Leitrim were down by 12 points and would face a further four minutes of action with only 14 players after an unfortunate black card for sub Aaron Gardiner and with that the game was effectively over.

Gardiner’s black card, while technically correct, was incredibly harsh on the young Leitrim player. Barely seconds on the field, the St Mary’s man was turned by his man and went to chase after him but lost his footing. Unfortunately for him, he appeared to reach out to save him but took down the Sligo man and got a black card.

Sligo were three points up at this stage and would quickly add three more as Leitrim reeled and the Yeatsmen applied the coup de grace with two goals in as many minutes to kill off the game.

The game started in a welter of excitement with Leitrim keeper Shaun Sheridan making a good save to deny Dillon Walsh a goal after he charged through the middle but the fans didn’t have long to wait for a goal, only it came at the other end from Leitrim!

Paul Honeyman looked as if he was shooting for a point but his effort fell short, right into the arms of Liam Chandler on the edge of the square and he showed good footwork to drive the ball to the net after just over a minute of action. 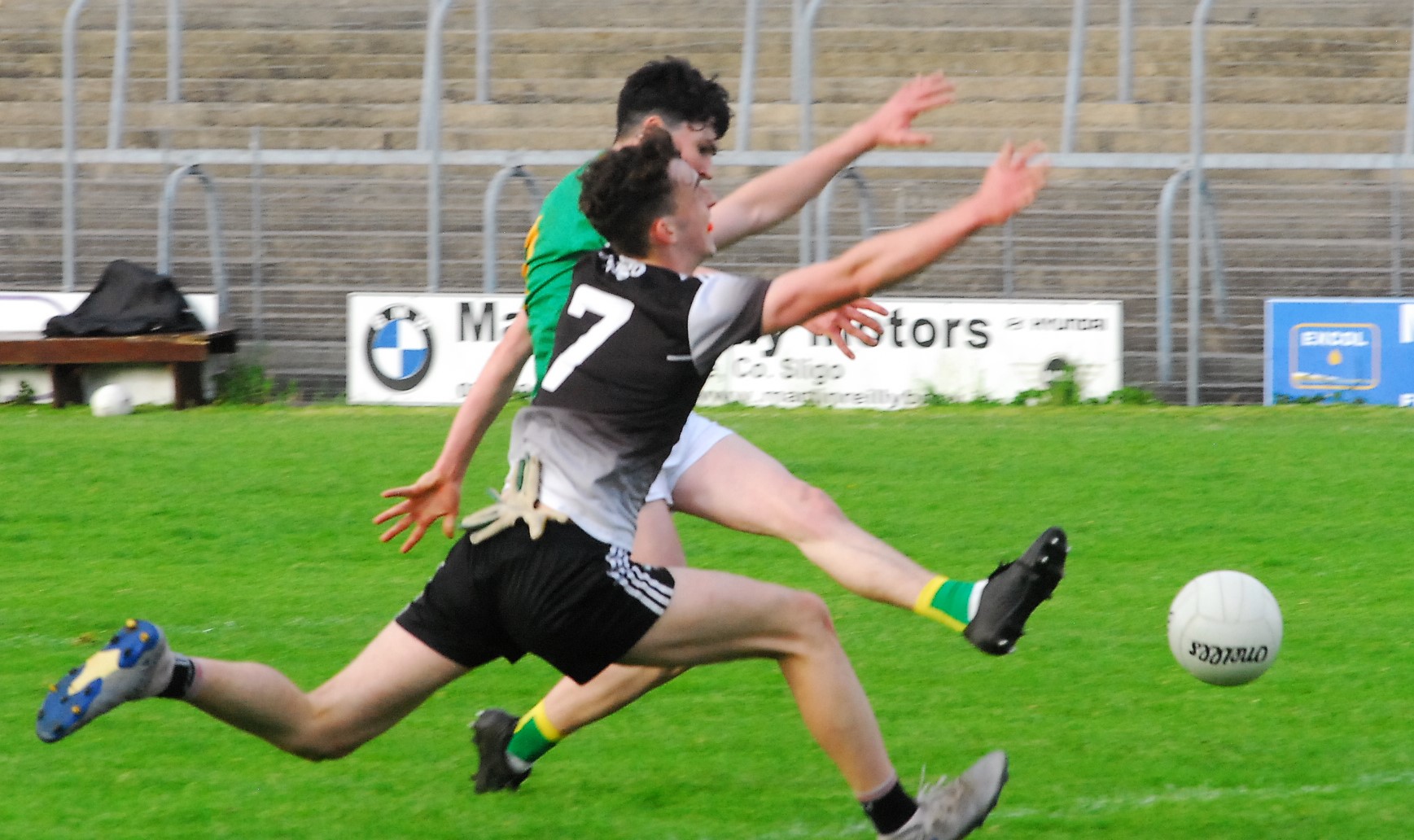 Honeyman and Josh Maye, after good work from Jack Foley, quickly added points before Sligo settled themselves with a good point from Cian Carty on four minutes. Chandler then stroked a fifty over the Sligo bar with what looked like ridiculous ease to leave Leitrim five clear after just six minutes.

In fairness, Sligo responded well with Dillon Walsh (2), Carty and corner-back Daniel King all grabbed points to leave a point between the teams after 11 minutes. Josh Maye collected a quick ball from a midfield mark to set up Tom Plunkett but the St Brigid’s man fired his shot high over the bar with a goal for the taking.

Sligo made Leitrim pay with points from Ronan Niland and Shea O’Neill and the home side took the lead after good work from Eli Rooney set up Niland for a second point.

But just when Sligo were threatening to take control, Leitrim struck a deadly blow when Ben Guckian’s long range sideline ball evaded the defence and Paul Honeyman fired a low shot to the far corner.

Leitrim should have immediately added a third goal but Plunkett and Josh Maye saw three efforts between the two of them blocked by superb if desperate Sligo blocks.

Sligo should have grabbed a goal when they sliced through the Leitrim defence only to see James Foley to lift his shot over the bar. However, he made immediate amends when Robert O’Kelly Lynch and Walsh combined to cut through the Green & Gold defence, Foley applying the killer finish from close range. 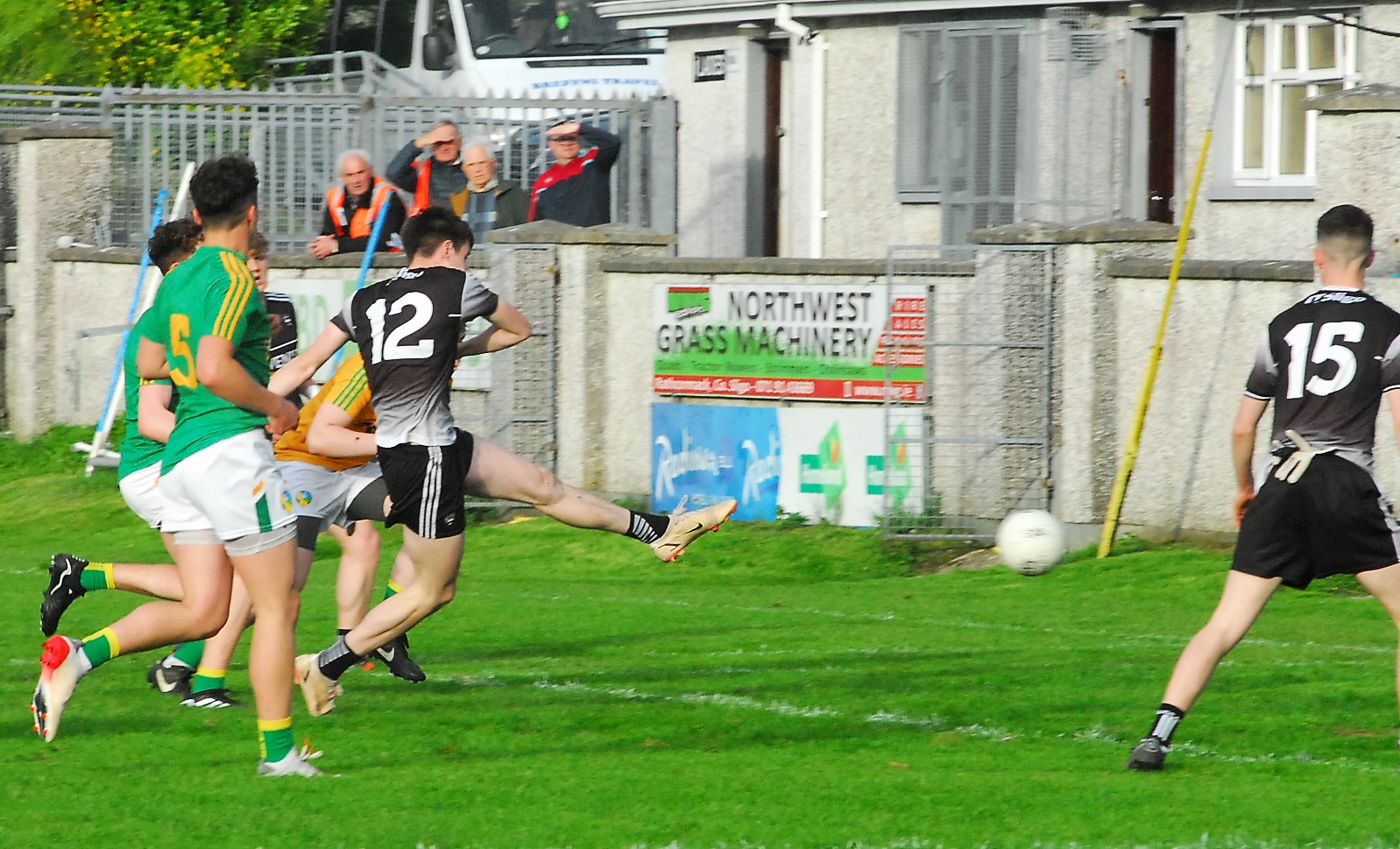 Sligo's Cian Carty drives the ball to the Leitrim net in the second half Picture: Willie Donnellan

Honeyman hit back, doing very well to win a fifty-fifty ball before firing over but Sligo were dominating if wasting chances, two wides followed by a miraculous goal-line block from Leitrim corner-back Darragh Gardener after the keeper was beaten.

A Honeyman free tied the scores as the game went into the first of two minutes of added time but Sligo had time to see James Foley fire over two points to give them a 1-11 to 2-6 halftime lead.

Leitrim’s Ben Guckian surged forward from the throw-in before finding midfield partner Jack Foley who still had to do a lot of work before scoring. Eli Rooney replied with a free but a defiant Leitrim drew level within the first four minutes of the second half when Guckian scored from distance and Maye set up Honeyman for a good point.

However, Sligo hit back in devastating fashion as Cian Carty finished off a brilliant team move with an easy finish that left the Leitrim defence with no chance.

The home side now had momentum and despite a Ben Guckian point, the home side started to pull ahead with scores from O’Neill, Foley and Rooney.

It got worse for Leitrim when sub Aaron Gardiner, literally seconds on the field was black carded for pulling down a Sligo player although it looked to this observer as if the St Mary’s man had tripped and inadvertently pulled down the Sligo attack.

Rooney and Carty added a point each to stretch the lead to six points as Leitrim struggled with their shape and Sligo took ruthless advantage. First, Eli Rooney claimed a long ball and finished with ease to put the home side nine points clear and two minutes later, Rooney saw a shot drop short but Carty was on hand the ball to the net.

Sligo would only add one more point before the final and that in added time, a beautiful curling shot from Foley, while Leitrim saw Chandler, Honeyman (free & play) add a couple of points but all heat was gone from the game at this stage.