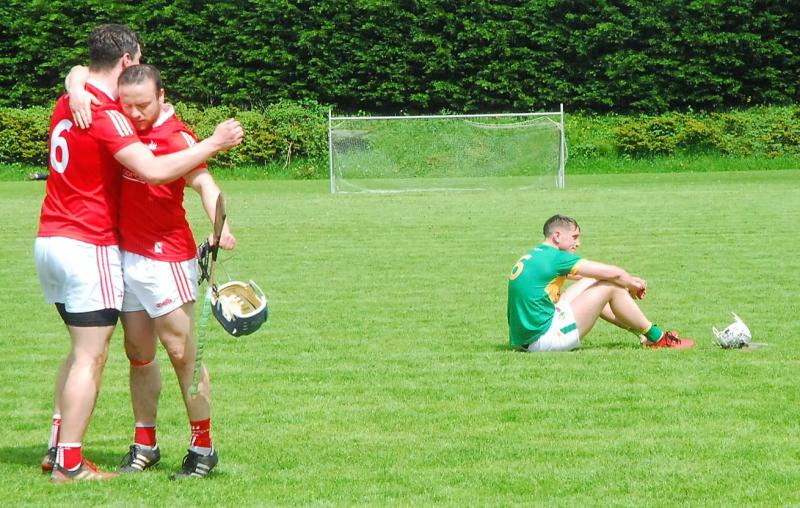 The contrast between victory and defeat as two Louth celebrates while Leitrim's Karl McDermott is shattered Picture: Willie Donnellan

Sometimes you wonder if the Gods are toying with us as Leitrim hurlers, within touching distance of another appearance in the Lory Meagher Cup, saw their dreams ripped from their grasp by Louth during four minutes of added time after a pulsating, superb contest in Pairc Sheain Ui Eslin in Ballinamore on Saturday.

With a draw sufficient for Olcan Conway's troops to seal a place in the final, Gavin O'Hagan nervelessly struck two superb frees to tie the scores as four minutes of added time commenced and with momentum behind them and burgeoning belief among a raccuous Green & Gold support in the stands, it seemed as if Leitrim were heading to Croke Park next weekend.

It was nothing more than Leitrim deserved after lady luck shone bright on Louth when Jamie McDonnell's long free from inside his own half landed in the Leitrim net to propel the Wee County into the lead with less than three minutes to go just when Leitrim looked as if they were taking a grip on the contest.

But then Leitrim's dreams were cruelly shattered as first Karl McDermott fired wide when a point looked his for the taking. It got worse as Mark Gahan edged Louth ahead in the third minute of added time before Joe Murray shot wide for the Green & Gold and then Aaron McDermott, in the dying seconds of added time, just failed to connect after a high ball broke right in front of the goals.

From that clearance, Louth cleared long, Liam Molloy made a superb catch in the midst of two Leitrim players, broke through their challenges before surging forward to set up Paul Matthews for the coup de grace in the last act of an epic contest that belied its status as hurling's lowest rung of the ladder.

These teams served up a thrilling encounter that swung from one team to another as Leitrim and Louth hurlers demonstrated immense commitment and fantastic skills. 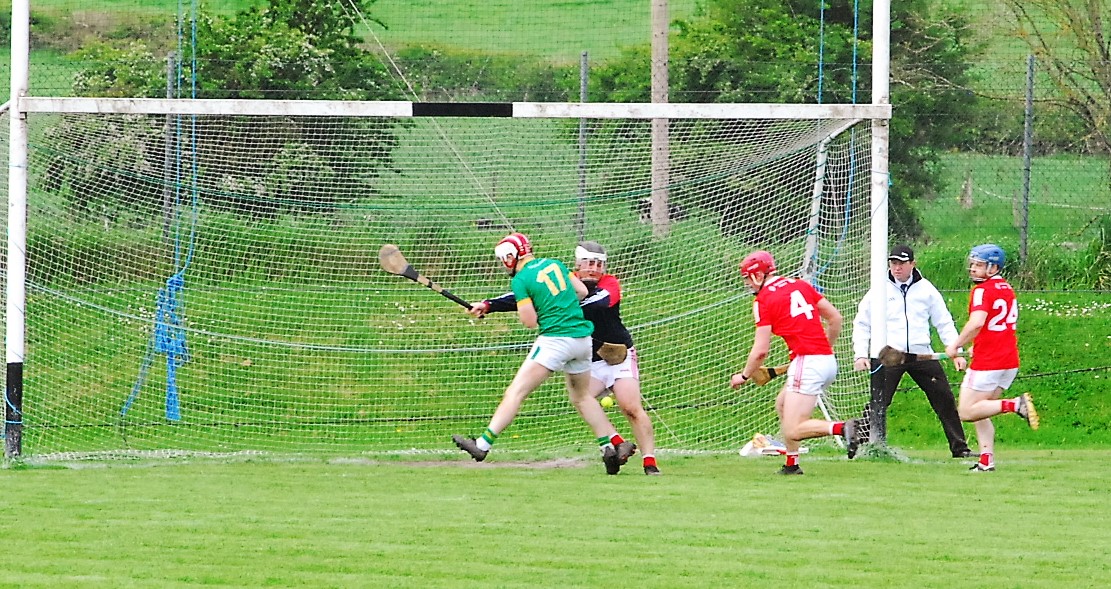 Louth got off to a fantastic start and led by four points after 20 minutes when James McNabola scored an excellent goal. Louth again surged clear in the second half, opening up a six point lead before Brendan Delaney's clever batted finish threw this game right into the balance.

But whatever about the late chances that broke their heart, when Leitrim look back on this game it is their tally of wides that will haunt them - 17 wides to Louth's six, 11 in the first half alone, in a game decided by two points says all that needs to be said as Leitrim's profligacy in front of the posts hit them very, very hard.

Leitrim opened the scoring with a Gavin O’Hagan free but the deadly Darren Geoghan replied with three for Louth inside the next two minutes, two from placed balls before a turnover allowed Paul Matthews to put Louth three clear.

James McNabola and O’Hagan (free) had wides before Geoghan fired over a free after a Stephen Goldrick foul but good work from Cathal O’Donovan and Joe Murray freed Diarmuid Kelleher for a tenth minute point.

Leitrim rallied with Brendan Delaney and Joe Murray firing over two rapid fire scores but wides from Kevin Clerkin, Delaney & McNabola and a good catch from keeper Ruairi Morrisey from a David McGovern shot meant that Louth increased their lead with points from Matthews and Peter Fortune.

But when Leitrim turned over a Louth defender, Joe Murray managed to get the ball to James McNabola and the Eslin man produced a typical clinical finish to reignite Leitrim’s challenge.

Feidhlim Joyce hit back with a point for Louth but Leitrim really should have had a second goal when Morrisey made a wonderful save from Murray who had torched the Louth defence, James McNabola shooting into the side netting in the follow up.

Liam Molloy had a Louth point sandwiched by two O’Hagan scores before Kelleher fired over excellently from distance with three minutes left the half. Leitrim were still missing chances with O’Hagan, Murray and McNabola all missing good chances.

Geoghegan added a free before registering his team’s sole wide of the first half from a free and O’Hagan finished the score in the first half, leaving the sides level at 1-8 to 0-11 at the halftime interval.

Joyce and Kelleher swapped points in the first couple of minutes of the second half while keeper Clement Cunniffe did well to keep a long range Louth effort going over the bar. Leitrim had three wides but Louth stretched their lead with another Geoghan free.

More costly for Leitrim was James McNabola being denied a goal not once but three times by keeper Morrisey and defenders Andrew Smith and Adam Plunkett who all made goal line clearances.

Louth got away on the double with a push in the back of David McGovern not being spotted and Darren Geoghegan pointing. And the the Louth sharpshooter escaped more serious caution for an off-the-ball clash that left Martin Feeney sprawled on the ground, referee Caymon Flynn opting to flash yellow rather than red.

Sean Kerrisk stretched the Louth lead to three points before Seanie Crosbie’s excellent catch in the middle of the park led to a long delivery to Geoghegan and he made no mistake with the finish to double Louth’s lead on 28 minutes.

Credit Leitrim as Karl McDermott profited from some fabulous stickwork from Martin Feeney out on the wing to score before a long ball to Joe Murray saw him make a great catch and take off on the run before finding Brendan Delaney on the burst.

The Carrick hurler had a lot of work to do still but burst through the Louth defence and then batted the ball past the Louth keeper for a huge goal on 52 minutes. 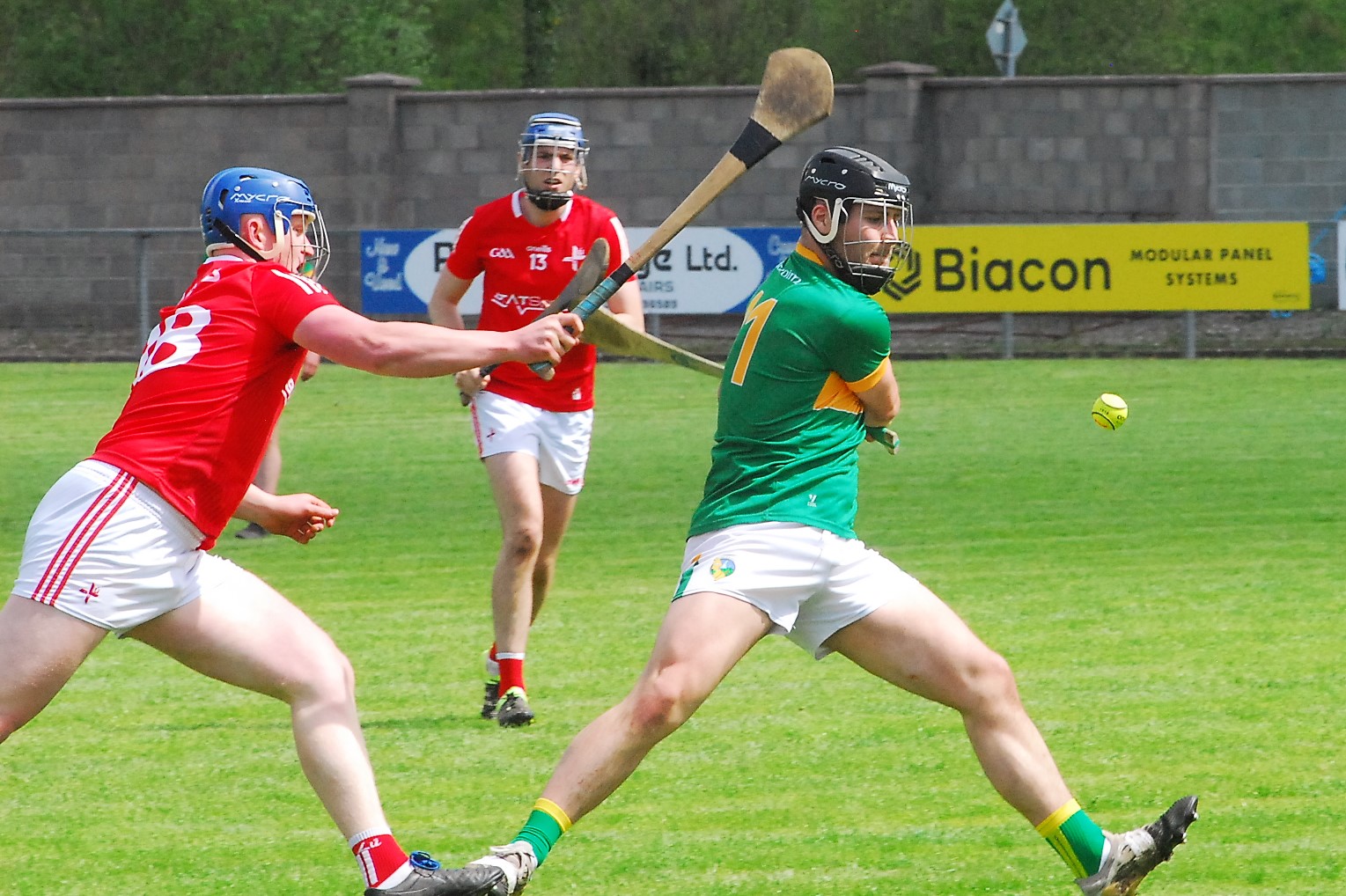 James McNabola followed up with a wide before Geoghegan and O’Hagan swapped scores. The wides continued to mount for Leitrim with Conor Hackett and O’Hagan hitting wides but great work from Murray under fierce pressure set O’Hagan up for a great score with less that nine minutes to go.

From the puckout, Leitrim turned the ball over and worked it in to Diarmuid Kelleher who blazed the sliothar over the crossbar with the goal there for the taking. But that score levelled the scores and when O’Hagan tapped over a free, Leitrim seemed on the road to victory.

Unfortunately, Jamie McDonnell’s free from inside his own half evaded everyone to end up in the net, although it may have got a slight touch and suddenly Louth were back in front.

Back came Leitrim with two O’Hagan frees, one from the halfway line and we were deadlocked again before Louth’s late scoring burst broke Leitrim hearts!