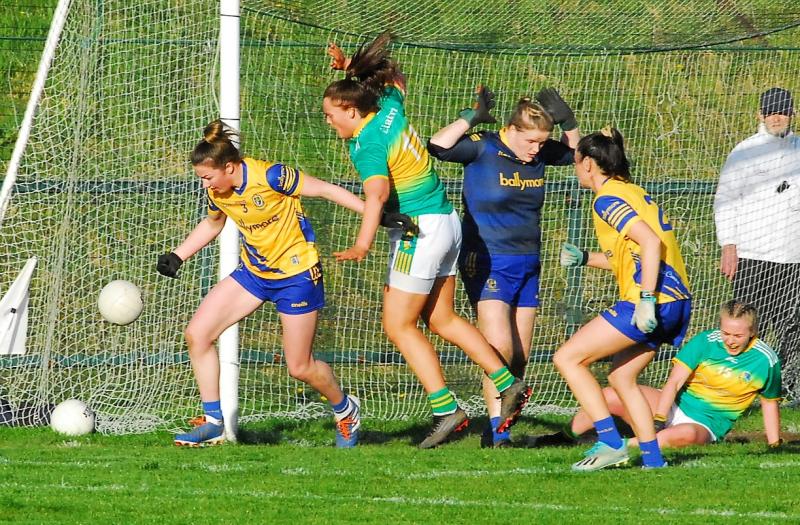 Goalmouth action from the first round game between Leitrim and Roscommon Picture: Willie Donnellan

It tells you something of Leitrim's standing in Ladies football that although Roscommon are the team who were promoted to Division 2 recently, it is their Division 4 neighbours Leitrim who will start next Sunday's Connacht Final in Tuam (2pm throw-in) as favourites to retain their Intermediate title.

Roscommon won the division 3 title in fine style while Leitrim were shocked by Offaly in the Division 4 semi-finals but it is Hugh Donnelly's side who will go into the game undefeated after the round robin Connacht campaign.

The two sides met in the first round of the provincial competition and how much we can take from that is hard to know - Roscommon started without two of the players who were named on the Division 3 Team of the Year and missed some  chances at crucial junctures.

They also erred in not starting Lisa O'Rourke who made a big impact when brought on at halftime while Leitrim secured victory with a late, late goal.

Yet Leitrim will look back on that game as one they should have won more comfortably. They missed enough chances to kill the game off completely and they will be well forewarned of the challenge that is coming from Roscommon.

Leitrim may be Division 4 bound for another year after missing out in an epic Division 4 semi-final but they don't play like a Division 4 team - with Michelle Guckian and Leah Fox providing a great one-two impact in attack and Ailish Cornyn marshalling the defence, the experience laden team has the know-how to come through tough challenges.

Apart from the Connacht title, a worthy prize in itself, there is also another prize to be won next Sunday with the winner taking top seed in group three for the TG4 All-Ireland Intermediate championship along with the Leinster runners-up and the loser of a Leinster quarter-final.

Whoever loses next Sunday will go into Group 2 with the Leinster champions and a defeated Leinster semi-final team. It might not make much difference with two teams qualifying from the group stages but it could open up a so-called easier path in the knockout stages.

The only worry Leitrim might have is over injuries with both Guckian & Fox going off in the game against Sligo with knocks, Guckian apparently suffering a hamstring injury and Leitrim will be hopeful that she is fully fit for most of Hugh Donnelly's gameplan revolves around the Kiltubrid player.

Both teams lost to Clare but Roscommon were just six points behind the Munster women compared to the 13 for Leitrim and it is far to say that Roscommon feel they have a point to prove against Leitrim.

Roscommon lost last year's Connacht Final to Leitrim and they won't want to make it three defeats in a row. But you suspect that if Leitrim have everyone fit and motivated, they have too much scoring power and experience and should retain their title, but not without a fight!