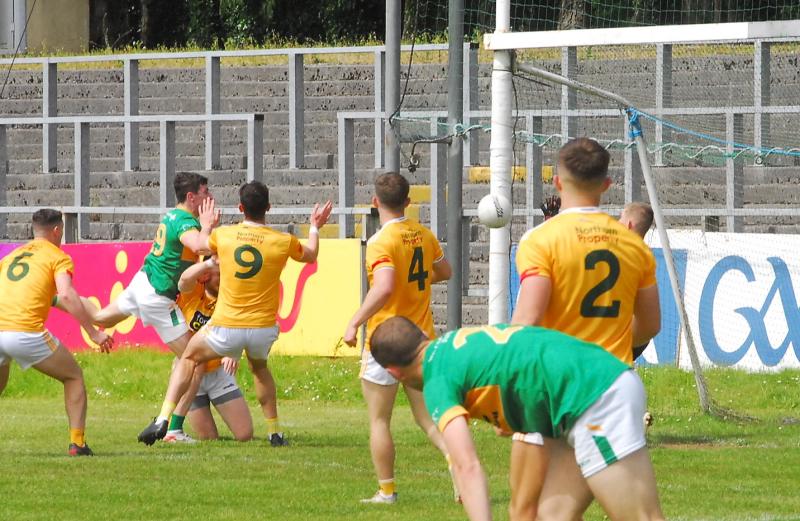 A focussed and superbly drilled Leitrim proved far too strong and much more motivated than their Antrim opponents as Andy Moran's troops marched into the Tailteann Cup Quarter-Finals on a sweltering Saturday afternoon in Avant Money Pairc Sean Mac Diarmada.

Backed by a vocal and delighted Leitrim support, the home side took the game to the Saffrons from the word go and led by points midway through the second half before a late Antrim surged, highlighted by a superb goal from their captain Peter Healy, cut the gap back to four points.

That drew mummers of concern from the Leitrim crowd but they needn't have worried as Leitrim looked composed and in control and never offered up the sort of goal chances that Antrim would have needed to pull off a miraculous escape.

The victory sees Leitrim into the Quarter-Finals where they can meet fellow northern section teams Cavan, Fermanagh and either Sligo or London with the draw being made live on RTE's Morning Ireland on Monday morning.

After the trauma of the defeat in Salthill, this was just the day Leitrim needed - a formidible defensive display gave Antrim, who probably bossed the possession stakes in the first half, no real opportunity and at the other end, Leitrim's movement and clever teamwork led to scores for Keith Beirne, Evan Sweeney, David Bruen, Shane Moran and the speedy duo Jack Heslin and Cillian McGloin whose blistering pace torched holes in the Antrim defence.

The game was still relatively tight with Leitrim wondering if they would bemoan missed goal opportunities from Beirne and Heslin but when Shane Moran managed to force a high ball into the Antrim net on 19 minutes, the shackles were lifted from the home team's shoulders and they blossomed, hitting Antrim with some deadly counter-attacking scores.

It wasn't all brilliant - Antrim kicked some woeful wides and missed at least two gilt edged goal chances that would have made the game much, much closer than the 1-9 to 0-4 halftime scoreline would suggest.

Yet it was still hard to see Antrim getting back into their game as their attack floundered completely against a Leitrim defence, superbly led by Mark Diffley, who seemed to be out to every ball first in that first half. And the feeling was reinforced when Heslin landed Leitrim's second goal just four minutes into the second half, set up by a barnstorming Shane Moran run.

Midway through the second half, Leitrim led by 11 points and with boss Andy Moran running his bench, Antrim started to come back into the game, a mini-comeback sparked when Antrim gathered their own kickout and captain Peter Healy played a couple of passes down the wing with his teammates before rattling a remarkable shot to the Leitrim net.

But time was Antrim's greatest enemy at this stage and while they cut the gap down to four points with four minutes of normal time, there was never a feeling that Leitrim were truly in danger and despite missing some great chances, including a goal chance for sub Mark Plunkett, a couple of late scores from the Aughawillan man and Mark Plunkett secured a famous and welcome victory.