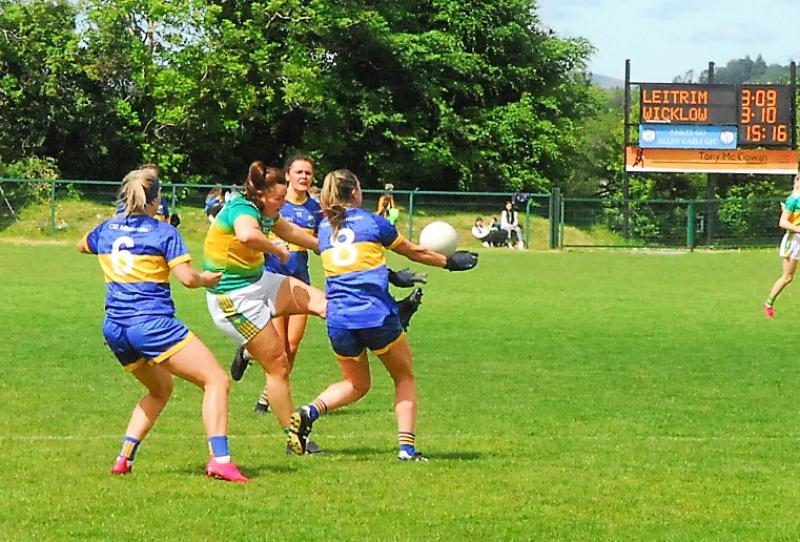 Leitrim face a must win game in the TG4 LGFA All-Ireland Intermediate Championship against Division 4 champions Offaly next Sunday after they suffered a shock defeat at the hands of a superbly drilled Wicklow in Shane McGettigan Park in Drumshanbo.

Hugh Donnelly's side went into the game as hot favourites after their impressive Connacht Championship victory but they found themselves up against a stubborn Wicklow side who grew in confidence as the game progressed, the Garden County women deserving their narrow victory on the day.

It wasn't that Leitrim didn't have the chances with Leah Fox missing a penalty early in the second half while the Glencar Manorhamilton player was desperately unlucky with an audacious 40 yard shot just seconds later after she intercepted the resulting kickout but even the most diehard fan would admit that the better side deserved the win, no matter how much they might have hung on towards the end.

It didn’t look that way in the first half as Leitrim recovered from the shock of losing an early goal to go four points clear midway through the half, Leitrim’s players looking sharp and well motivated as they sought to build on home advantage in their only home game of the campaign.

But Wicklow never allowed Leitrim to open too big of a gap and when their slick passing ended with Amy Burke virtually walking the ball into the Leitrim net with less than six minutes left in the half, the Leinster side were a point to the good.

Leitrim led by a point at the break but a third goal, this time from the impressive Laura Hogan five minutes into the second half, gave Wicklow an enormous boost and as Leitrim struggled to break down a resilient Garden county defensive unit. In fact, Wicklow established a four point lead themselves and it took an all too rare moment of magic from sub Siomha Quinn to get Leitrim back into the game six minutes from time. 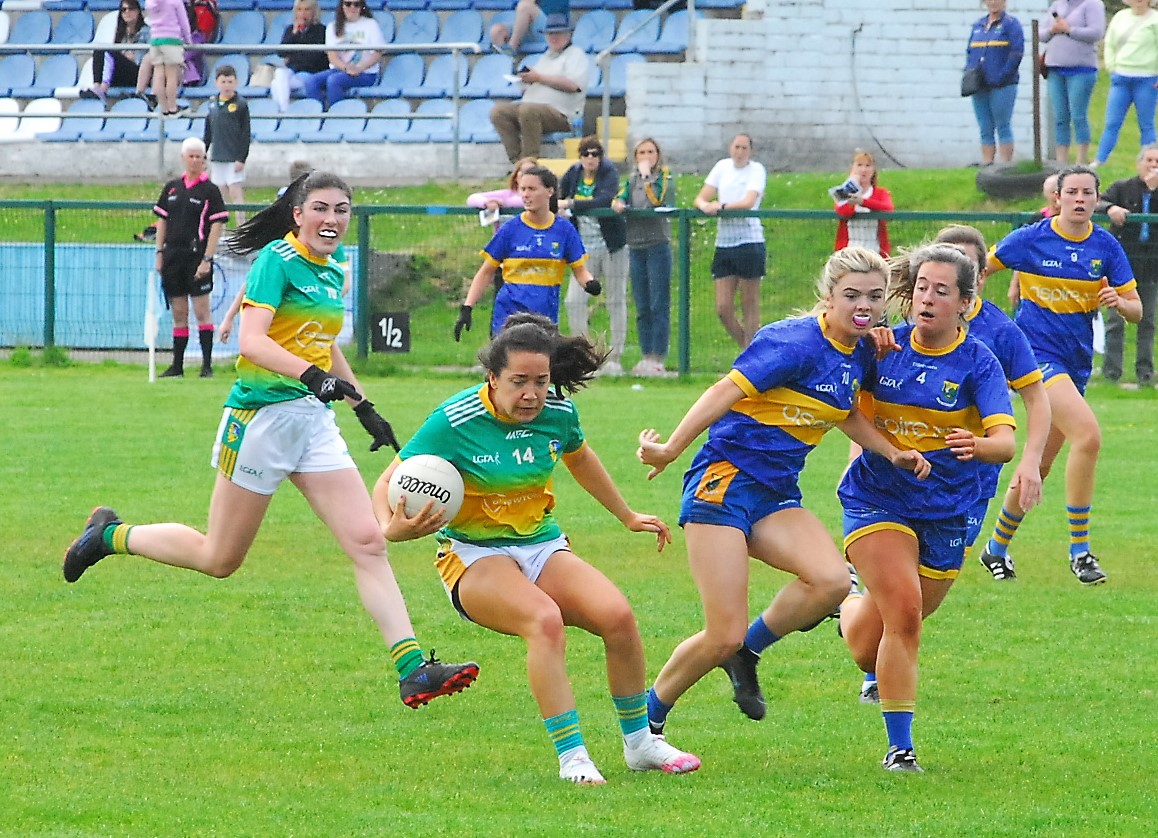 Leitrim’s intensity and workrate surged again but the nearest they got to forcing an equaliser came less than two minutes from time when Michelle Guckian saw her shot brilliantly blocked by Wicklow’s Niamh McGettigan as the visitors held out pretty well under ferocious Leitrim pressure.

Looking back on the game, Leitrim will rightly bemoan missed chances - apart from Leah Fox’s missed spotkick, Carla Le Guen drove a goal chance over the bar while Michelle Guckian and Roisin McHugh were unable to generate the force to send a lobbed ball into the Wicklow net.

The defeat now leaves Leitrim with an absolutely huge must win clash with Division 4 champions Offaly next Sunday after the midlanders were denied a famous victory over Wexford by a late goal that sent them to a 2-12 to 3-7 defeat. It means that a loss for either team would end their hopes of making the quarter-finals so the stakes are huge.

Wicklow captain Sarah Jane Winders opened the scoring after a good move featuring Niamh McGettigan but Leitrim hit back with a fine Leah Fox score following a good run. Marie Kealy edged the visitors back in front on four minutes while Meadhbh Deeney saw a good shot blocked by the Leitrim defence.

Leitrim tied the scores after Fox’s pass saw Michelle Guckian produced a good sidestep to score but Leitrim suffered a big blow when a Wicklow shot dropped short but a defensive pass was intercepted by Deeney who was taken down at the expense of a penalty. Deeney dusted herself off to produce a wonderful spot kick, sending Michelle Monaghan the wrong way on eight minutes.

But the scores were soon level when Leitrim took advantage of a Wicklow defender missing a long put to Roisin McHugh. The Ballinamore player was left with an unmarked Michelle Guckian in support and a quick pass to the GPA Player of the Month for April saw her round keeper Jackie Kinch for an easy finish.

Wicklow responded well with good points from Deeney and Kealy but Leitrim hit back with points from Guckian and McHugh while Leah Fox was unlucky with a long range effort. And it seemed as if Leitrim were starting to show their class when Laura O’Dowd pounced on a poor Wicklow kickout. 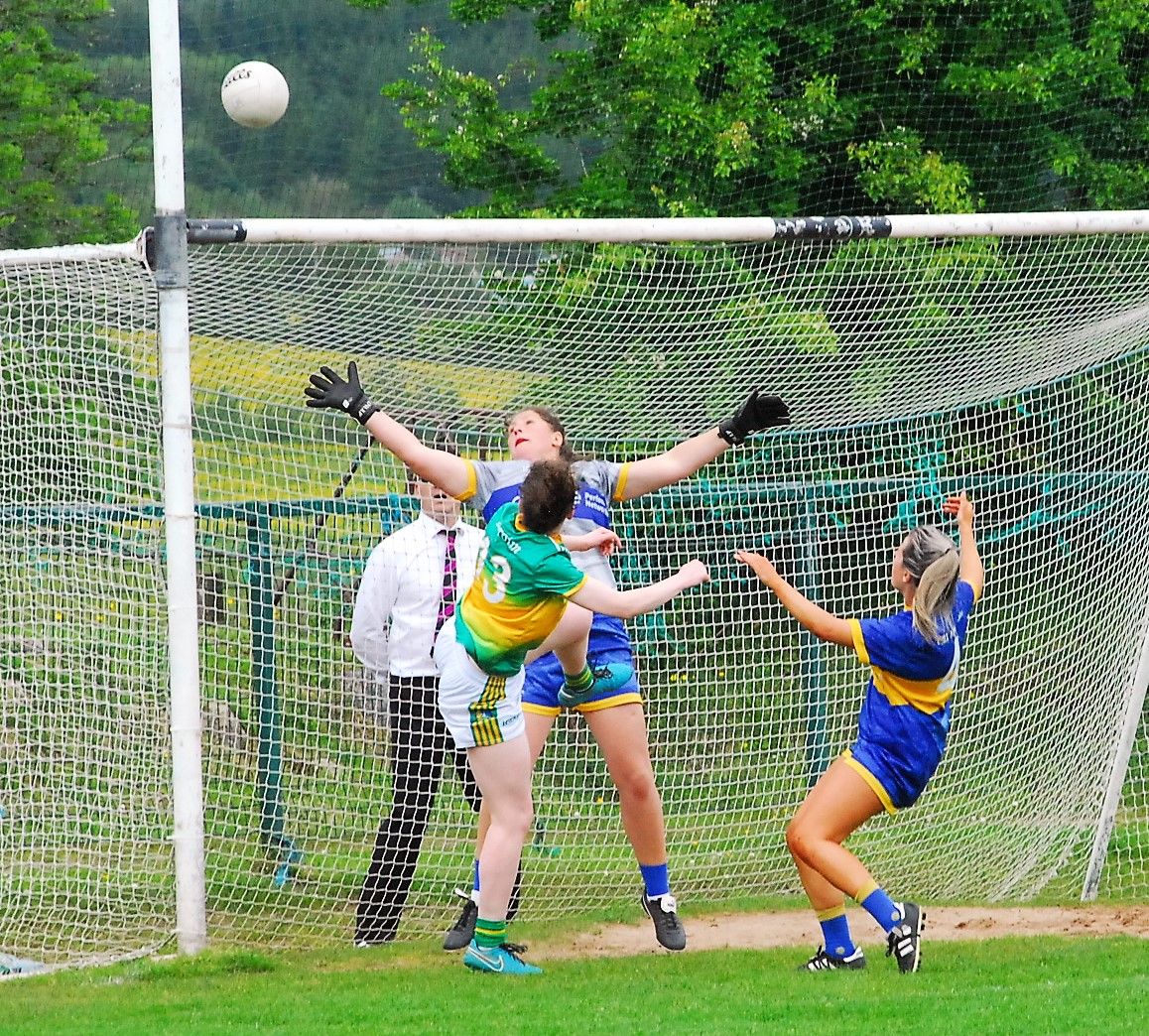 Roisin McHugh watches as her palmed effort goes wide at the end of the first half Picture: Willie Donnellan

A quick one-two with Leah Fox followed and O’Dowd buried a wonderful shot in the Wicklow net to put Leitrim a goal to the good. It should have been two goals to the goal a minute later as Roisin McHugh released Carla Le Guen but the wing-back lifted her shot over the bar.

Wicklow weren’t lying down - Amy Burke dragged a shot across goal but a Kealy free settled them. Guckian hit back for Leitrim before Deeney finished off a good move and then Kealy converted a free to cut the gap to two points.

Wicklow’s fortunes were boosted when they turned over a kickout and a blistering move featuring four or five players ended with Burke almost walking the ball across the line for a dramatic goal.

Leitrim hit back with a perceptive Fox pass finding Megan McGovern back out the field for a long range score and the home side regained the lead when a short free from Guckian found O’Dowd who pointed.

The home side did have a few chances to pad their lead but Michelle Guckian and Roisin McHugh were both unlucky with fisted effort from crossfield passes as Leitrim led 2-8 to 2-7 at the break.

Both teams had wides early in the second period but the first score of the half was a huge one with Aoife Gorman’s powerful run cutting through the Leitrim defence, a short pass into Laura Hogan who fired the ball to the net.

Leitrim hit back with a fine Laura O’Dowd point after a Wicklow attack was turned over and it looked as if Leitrim would regain control when a Wicklow defender was somewhat harshly punished for what referee Gus Chapman felt was a pull on Megan McGovern who was bearing down on goal.

Leah Fox stepped up to take the spotkick but the ball flew well wide. Fox almost made instant amends as a huge leap saw her intercept Kinch’s kickout, her 40 yard shot flying over the head of the Wicklow keeper but the ball went wide to Kinch’s relief.

With Wicklow growing in confidence, they rattled off three points from Kealy frees between the 13th and 20th minutes as the visitors now led by four points and looked the stronger and more composed side.

However, when Leitrim turned over the ball, Leah Fox’s pass found sub Siomha Quinn and she produced a sumptuous finish with less than six minutes to go to find the Wicklow net and we were back to a one point gap.

With Leitrim re-energised and working like demons, Wicklow showed fantastic composure to keep hold of the ball and run down the clock. Even with more than six minutes to go, Leitrim only worked one real scoring opportunity but top scorer Guckian saw her shot brilliantly smothered by Niamh McGettigan.

Wicklow had a chance to pad their lead when the speedy Niamh Cullen was fouled but Marie Kealy’s free drifted wide. However, it didn’t cost the Garden County as the final whistle sounded seconds later to seal a famous upset win.