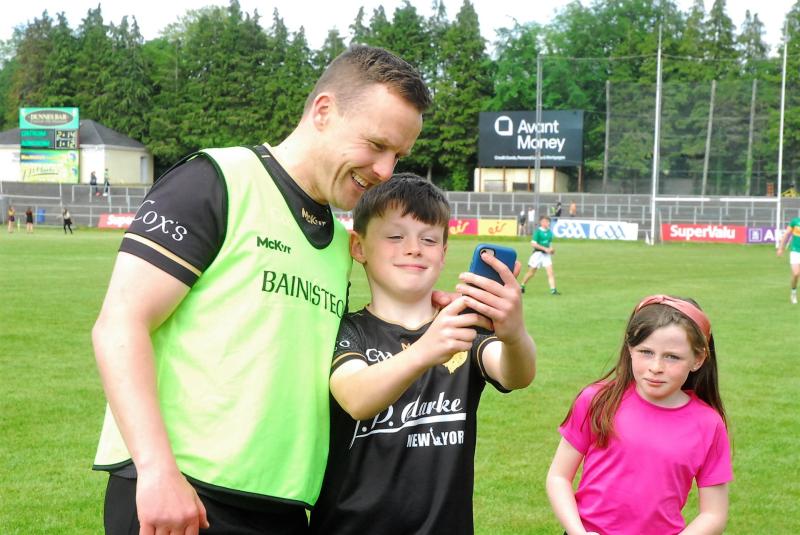 With young, and some not so young, fans running around looking for autographs and pictures, Andy Moran carried the look of a very happy man last Saturday afternoon in Avant Money Pairc Sean Mac Diarmada as the Leitrim manager lauded the impact of the Tailteann Cup on his team.

Chatting to the Observer, the enthusiasm and energy Moran brings to the Leitrim set-up is blindingly obvious: “Isn’t it so exciting to be listening to a draw on Monday morning? I know it sounds childish but I think all of Leitrim will be listening to the draw or looking at twitter. It’s brilliant.

"I looked up behind me during the game and saw the crowd really getting behind us. Then we have kids coming in asking for players for autographs, photos - it's amazing.”

Whatever about the  fans, Andy lauded the impact the Tailteann Cup will have on his team when he talked about the performances he believes Leitrim are capable of: “We’re getting closer to the performance we want. In the first half, we probably thought we were closer to it than we are. The Tailteann Cup has given us three extra weeks of training - we started in London in the championship with 36 players, we still have 36 players, boys are buying into it, they just want to get better - they want to be challenged and it is just great to be honest.”

Picking Leitrim up after the defeat in Salthill did have its challenges but in reviewing the game, Andy saw plenty of positives to draw from the Galway game: “To be honest, we took on Galway, we competed with them brilliantly for 25 minutes but these boys are intelligent boys, they’re led by the likes of David Bruen and Donal Wrynn and they were looking at it and said we competed with them for 25 minutes.

“Yes the second half was basically like a Division 1 team playing against a Division 4 team but for 25 minutes, we held our own. We looked at the video and saw we did some very good things. The boys led it themselves, they said ‘lets go again’.

“Was it hard to pick them up? There was a big defeat there, you have to be acknowledge that but at the start of the year, we said our aims were really get competitive in Division 4, go to London, try our best to get a win, go again against either Mayo or Galway whoever we get and then go after the Tailteann  Cup and get as many games as we can. The more games we get, the better we’re going to be.”

The win over Antrim did not come without its challenges with Leitrim missing Ryan O’Rourke, Donal Casey, Ciaran Cullen and Conor Dolan through injury, injuries caused Andy believes by the jump in pace and physicality of facing Galway: “The speed of the game went up slightly and you have to adjust, you can’t just expect the machine to keep going at that and we had four injuries, we made two changes on top of it.

“I thought all the guys who came in - Evan Sweeney, obviously Keith Beirne, an exceptional player, Jack Heslin. Jack Heslin is I think the pointer for us, he hasn’t played for us since 2019 so it is going to take him time to fire up those engines again. Today he gave us 55 minutes and he was just brilliant.

The Leitrim manager also had special praise for his full-back line and Mark Diffley in particular: “Diffley has probably been the standout player for the whole year, he’s been brilliant in terms of what he’s given us. He controls it in there, he manages it and you’ve the two experienced guys there beside him in Paddy Maguire and Conor Reynolds - Paddy making his 96th appearance I think for Leitrim.”