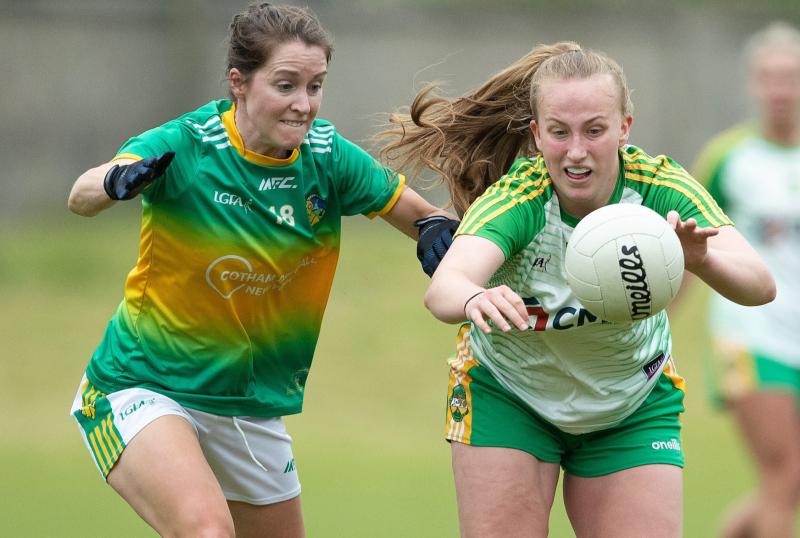 Leitrim’s hopes of advancing to the knockout stages of the TG4 LGFA All-Ireland Intermediate Championship were crushed on Sunday when Offaly recovered from a bad start to repeat their League semi-final victory over the Green & Gold in Clara.

After suffering an agonising one point defeat at the hands of Wicklow, Hugh Donnelly’s side travelled to Bretland Park last Sunday knowing that their fate was out of their hands and victory was an imperative if they were to reach the quarter-finals for the second year in a row.

And it looked as if the Green & Gold would do just that as Leitrim led by five points midway through the first half as they recovered from a fortunate Offaly goal to lead 1-5 to 1-0. However, the remainder of the first half turned into a nightmare as the home side rattled off an unanswered 1-9 to take control of the contest.

Letirim had their chances in the second half with Offaly keeper Eimear Evans twice denying Roisin McHugh and Laura O'Dowd the goal that might have got Leitrim back in the game. McHugh missed another goal chance as did Guckian in the final stages to leave Offaly with a seven point victory.

With Wexford getting the better of Wicklow in the other game, it means that Leitrim will not finish in the top two in the group regardless of how they fare against the Model county next Sunday. With Offaly and Wicklow facing each in their final game, even a draw there would mean Leitrim cannot catch either team.

It brings to an end an frustrating year for the Ladies with Roscommon, a team they defeated in the Connacht Intermediate Final, booking their place in the quarter-finals last weekend with a second win in the campaign.

For Offaly, the victory underlines their growing potential and proves their victory over the Green & Gold in the league semi-final last March was no fluke. Indeed, they only lost to Leinster finalists Wexford by a last minute goal the previous week.

Leitrim started like a high speed train against the wind, registering three early points before Offaly knew what had hit them. Three of those points came from Michelle Guckian and only a lucky goal kept Offaly ticking when Sarah Keohoe got the ball to the net after a Saorah Doyle shot for a point hit the post.

Leitrim responded very well and Roisin McHugh got an excellent 12th minute goal after a pass from Leah Fox. Leitrim led by 1-5 to 1-0 at the quarter way stage and were very economical, taking every chance they got while Offaly had hit seven wides.

Yet by half time, the entire complexion of the game had changed. Offaly found their feet and began to breach the Leitrim defence with great regularity.

Saoradh Doyle got a couple of frees and then Mairead Daly showed her vast experience as she sped through the Leitrim defence and equalised with a goal. Michelle Mann gave Offaly the lead for the first time and they went on to lead by 2-9 to 1-5 at half time.

It was an extraordinary turnaround after a shocking start and it very much put Offaly in the driving seat. Leitrim fought with everything they had in the second half. They finally got their sixth point from Guckian a minute into the second half and almost got two quick goals as Eimear Evans denied Roisin McHugh and then Laura O'Dowd.

After Leah Fox added a point for the winners, McHugh blazed wide with another goal chance and Leitrim ultimately paid a very dear price for these misses. As often happens in those cases, the goal came at the other end with Saoradh Doyle hitting the net after a Saoirse McGuinness shot was blocked.

That more or less ended it as a contest though Leitrim kept trying. Guckian got two points, one free but Roisin Ennis and Mairead Dalt replied for Offaly and Leitrim's day was summed up in injury time when Guckian was wide with a final goal chance.